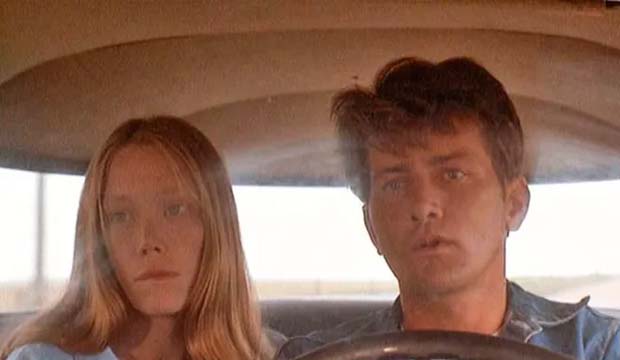 Adapted from the award-winning novel by Camille DeAngelis, Luca Guadagnino’s “Bones and All” is about two cannibals, Lee and Maren (Timothee Chalamet and Taylor Russell), who fall in love while evading the police and, worse, others with a similar taste for human flesh. Blending horror, romance, and road movies, the film is a delectable cocktail of grammars; in a recent webchat with Gold Derby’s Daniel Montgomery, writer David Kajganich said he found the third hardest to nail. Those who’ve compared the film to classics like “Bonnie and Clyde” and “Badlands” clearly feel he’s struck the right alchemy. Click through our gallery above featuring “Bones and All” plus 10 other movies you should watch about lovers on the run.

Part of the challenge was emulating a road movie’s “tone poem” and punctuating the story with characters who organically impart a wealth of detail in only a few brief moments.

Naturalistic dialogue can be full of details, half-details, strange amalgams or references that you don’t understand—things that make a person on screen feel like a person you’re not being invited to know or understand, but you’re being invited to observe. You can build quite a lot of specificity into characters, knowing that the audience will find them peculiar or confusing in some respect, but this is how we feel about those we overhear on the bus or in a movie theater. We don’t know anything about them except the very few things we’re being given.

Michael Stuhlabrg (“A Serious Man”),  Chloë Sevigny (“Boys Don’t Cry”), Jessica Harper (the lead of Dario Argento’s 1977 “Suspiria,” which Guadagnino remade in 2018), and even David Gordon Green (director of “Pineapple Express” and the previous three “Halloween” entries). But the supporting character everyone will be talking about is Sully (Mark Rylance), a fellow eater whose confused feelings toward Maren incur deadly consequences. Gold Derby’s Best Supporting Actor odds have Rylance, who won the prize for 2015’s “Bridge of Spies,” close to entering the top 10. He’s currently ranked 13th and could surge after the movie is released widely on Nov. 23rd.

With its allegorical overtones, proximity to the vampire subgenre, and lush aesthetic, “Bones and All” has all the makings of a hit. Above, check out 10 other movies about lovers on the run that complement Lee and Maren’s picaresque odyssey through the Reagan-era midwest.