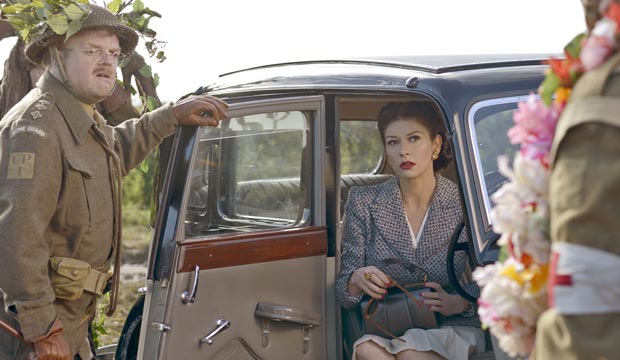 When Sean Connery opened the envelope in 2003 for Best Supporting Actress, he simply pronounced the winner as “Catherine.” Such was the expectation of her win and the sensation she had caused in the film “Chicago” that his former co-star didn’t even feel the need to pronounce her full three names. Catherine Zeta-Jones was born in Wales on September 25, 1969, and now celebrates her 50th birthday.

Zeta-Jones initially was known to American audiences for her statuesque and striking beauty. She first gained notice on these shores in a television mini-series about the Titanic. The series aired a year before James Cameron‘s film of the Titanic story swept into movie theaters. She then began appearing on the big screen in a number of ingenue roles.

What American audiences didn’t know was that Zeta-Jones was hiding a couple of secret talents, namely that she was a superb singer and dancer. She had started out on the London stage when she was just a teenager becoming the youngest woman to ever play the lead role in the West End production of “42nd Street.” Not wanting to be typecast as a musical theater performer she put those talents on hold as she established herself in film. She pulled them out again to great effect in the film version of the Bob Fosse musical “Chicago” directed by Rob Marshall, which won the Oscar for Best Picture and a Best Supporting Actress award for Zeta-Jones.

She would also subsequently return to the musical theater world in a revival of Stephen Sondheim‘s “A Little Night Music,” which would earn her a Tony Award as Best Actress in a Musical.

Tour our photo gallery above featuring her 15 greatest film performances, ranked from worst to best. Our list includes “The Mask of Zorro,” “Traffic,” “Entrapment” and more.