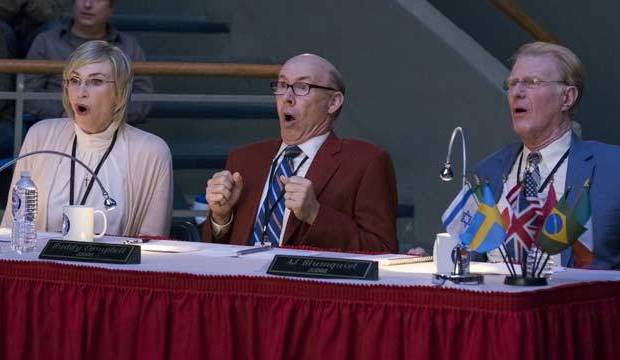 Let’s turn it up to at least 11 and sing the praises of the 5th Baron Haden-Guest, otherwise known as Christopher Guest. This actor and filmmaker is known for being married to actress Jamie Lee Curtis. Then there was his one-season stint (1984-85) on “Saturday Night Live,” where he helped introduce the phrase, “It’s a Minkman.” But his career took off after starring in the 1984 mock rock documentary “This Is Spinal Tap” directed by Rob Reiner. Guest would then turn the satirical genre into his own calling card as a filmmaker while recruiting an ace ensemble of masterful ad-libbers. In honor of his 71st birthday, here are 11 of his greatest films, ranked worst to best.

Here is just a taste of what you’ll find in our photo gallery above (but which one is in the top spot?):

BEST IN SHOW (2000)
Guest co-opted the insular world of dog show competitions, with cute pooches as bait, to turn the spotlight on their foible-filled human owners as they arrive in Philadelphia and prepare their pup and themselves for the big event. They include Gerry and Cookie Fleck (Eugene Levy and Catherine O’Hara), a Florida couple who own Winky, a Norwich Terrier. They keep encountering men along the way from Cookie’s very busy past. The personalities of neurotic upper-class yuppies Meg and Hamilton Swan (Parker Posey and Michael Hitchcock) have an adverse effect on Beatrice, their Weimaraner. As for Sherri Ann (Jennifer Coolidge), a trophy wife to an elderly sugar daddy, she likes to hang out with her poodle Rhapsody in White’s trainer, Christy Cummings (Jane Lynch), and even gives her a makeover. Guest goes solo as laid-back outdoorsman Harlan Pepper, owner of bloodhound Hubert, who is an amateur ventriloquist who prides himself on knowing every variety of nut. Speaking of nuts, Fred Willard steals the show as a clueless announcer Buck Laughlin, with such asides as, “And to think that in some countries these dogs are eaten.”

THIS IS SPINAL TAP (1984)
The Mount Everest of mockumentaries. Yes, Eric Idle and Neil Innes’ “All You Need Is Cash” – a faux music doc  about a band called the Rutles that spoofed Beatlemania  – came first in 1978. But Reiner definitely turned it up beyond 11 in this satire of British heavy-metal dingbats. The laughs are in the close-to-reality details, such as the series of drummers who die from spontaneous human combustion and choking on someone else’s vomit. But Guest meets his alter-ego match as sexy yet dense singer and guitarist Nigel Tufnel, whose trouble with measurements causes a Stonehenge stage prop to be only 18 inches high. No rock cliché is left unturned. The best exchange is between Michael McKean’s David St. Hubbins and Nigel. David: “It’s such a fine line between stupid, and uh…”  Nigel: “Clever.” David, “Yeah, and, clever.”

WAITING FOR GUFFMAN (1997)
The world of amateur community theater is satirized without mercy as dictatorial director Corky St. Clair puts his hand-picked troupe of players through their musical paces as they perform a salute to the 150th anniversary of Blaine, Missouri – the stool capital of the United States. Heading the cast are married leads Ron and Sheila Albertson (Fred Willard and Catherine O’Hara), travel agents who never have stepped foot outside of Blaine. They are joined by a Dairy Queen worker (Parker Posey), a dentist (Eugene Levy) and a retired taxidermist who narrates the show (Lewis Arquette). There is more drama backstage when Corky invites noted New York theatrical impresario Mort Guffman to the opening with the hopes that the “Red, White and Blaine” would be produced on Broadway. But just like Godot, he never shows. Guest is more than over-the-top in his portrayal of a gay man who claims to have a wife named Bonnie no one has ever seen, and dominates the proceedings. But I always liked his insult: “Well, then I just HATE you … and I hate your ass FACE!”