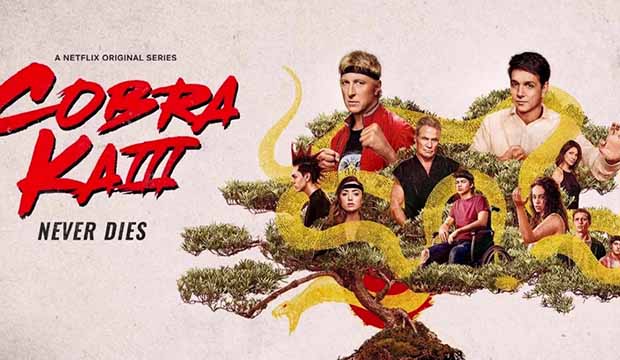 Netflix blockbuster “Cobra Kai” revisits old rivals Daniel LaRusso (Ralph Macchio) and Johnny Lawrence (William Zabka) from the original 1984 Oscar-nominated classic “The Karate Kid.” The show picks up over 30 years after that iconic cinematic moment from the original film in which underdog LaRusso defeated bully Lawrence at the 1984 All Valley Under-18 Karate Championships Tournament. This time, the show is told from the perspective of down-and-out Johnny, who re-opens the Cobra Kai karate dojo, rekindling his old rivalry with Daniel, who himself has become a successful prestige car salesman, husband and father.

The series’ first two seasons follow Johnny and Daniel as they set up their own dojos, as Lawrence establishes the show’s namesake Cobra Kai while LaRusso leads Miyagi-do, named after his former sensei Mr Miyagi (played by the late Pat Morita from the original film). The Valley’s teenagers soon join either dojo, and are then inevitably drawn into the decades-long feud between Johnny and Daniel as they compete for All Valley karate supremacy.

The third season kicks off with Johnny’s karate prodigy Miguel (Xolo Maridueña) paralyzed and in recovery after falling off a balcony during his devastating fight with rival Robby (Tanner Buchanan), Johnny’s estranged son. Robby has turned his back on LaRusso, joining forces with the villainous Kreese (Martin Kove, reprising his role from the original film), Lawrence’s old sensei, who returned last season to take over the Cobra Kai dojo. A three-way feud ensues throughout the season, with old grudges culminating in an immensely satisfying season finale. Fans now await the show’s return for Season 4, which has recently wrapped shooting and is likely to premiere on Netflix later this year.

“Cobra Kai” flew under the radar when its first and second seasons streamed on YouTube’s premium service in 2018 and 2019. But when YouTube stopped making original content, the series moved to Netflix, becoming the most-watched series on the platform. The show further skyrocketed in popularity when the third season premiered in January 2021, cementing it as one of Netflix’s most popular original series. In addition to its impressive commercial success, “Cobra Kai” has also garnered raves from critics, with Season 3 scoring a “fresh” 90% on Rotten Tomatoes. To date, the cast and crew are looking for their first invite to the Emmys, having only scored a pair of comedy stunt co-ordination nominations for its first two seasons.

Will “Cobra Kai” finally kick down the door with the TV academy across the board in the comedy series categories? Follow the links below to see what some of the series’ creative team have to say.