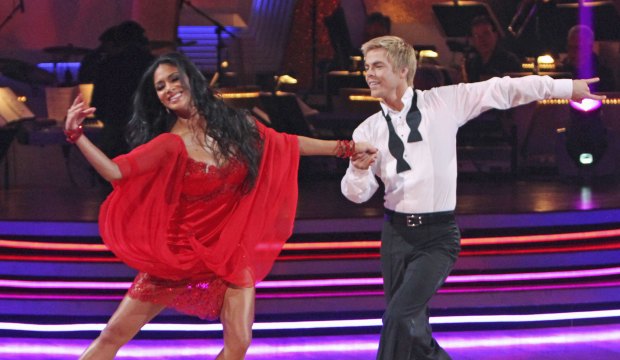 “Dancing with the Stars” premiered in 2005 with a focus on teaching celebrities some fancy footwork. But along the way the professional dancers who teach and partner with those celebrity amateurs became stars in their own right. Many of them returned to the show year after year, and over a dozen have won the coveted Mirror Ball Trophy over the course of the series. Scroll down to see every single “DWTS” pro champion, listed by their number of victories.

It’s fitting that the “DWTS” pros have become fan-favorites because they’re not just dancers. They’re also trainers, choreographers and storytellers, and their chemistry with the stars fuels the show’s best routines, so they’re truly the lifeblood of the competition, especially when they bring talent and charisma out of unexpected places, from child stars to race car drivers to one male model, Nyle DiMarco, who won the Mirror Ball Trophy despite being deaf: you need the steady hand of a pro more than ever when you can’t hear the music.

The first season aired during the summer of 2005, included just six couples, and lasted only six weeks until “General Hospital” actress Kelly Monaco was crowned the winner with her pro partner Alec Mazo, who competed in four more seasons of the show but didn’t win again. He was followed by Cheryl Burke, who became the show’s first two-time professional winner with her back-to-back victories in season two (with singer Drew Lachey) and season three (with football star Emmitt Smith).

But before long Derek Hough, arguably the biggest breakout star in the show’s history, eclipsed that total with six Mirror Ball Trophies, far more than any other pro before or since. Hough even continued that winning streak outside of the competition, winning a couple of Emmys for Best Choreography for routines that he created for “DWTS.” But he’s not the show’s only professional success story. See the full list below.