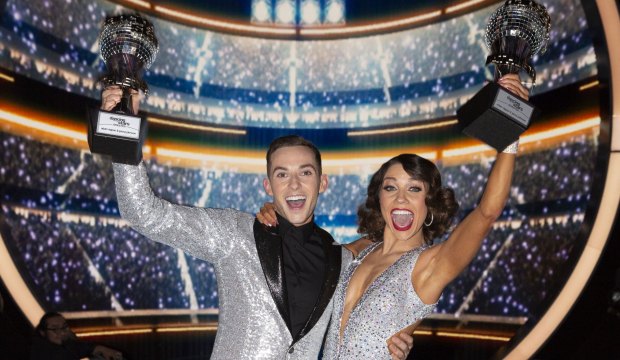 “Dancing with the Stars” has been airing on ABC for 28 seasons over the last 15 years. What started as a six-week summer series in 2005 became a TV institution, winning more than a dozen Emmys over the course of its run. But when it comes to the show’s Mirror Ball Trophy champions, they weren’t all created equal. Scroll down to see how we rank every single winner of the show from the very worst to the very best. Do you agree with our choice for the greatest of all time?

“DWTS” is an amateur dance competition series, so the quality of its performances is always a mixed bag. Some celebrities have the rhythm, musicality and stamina to keep up with the grueling pace week after week, while others simply don’t. But the show isn’t just about the dancing. While judges Len Goodman, Carrie Ann Inaba, Bruno Tonioli and various guest judges score the quality of the performances, the audience at home also gets a vote, which leads to some, shall we say, interesting results.

SEE‘Dancing with the Stars’: Top 15 BEST Pro Dancers Ever

That has especially been true in later seasons, when viewer votes have skewed the show in more and more unusual directions, with dance-challenged celebs like “Bachelor in Paradise” alum Joe “Grocery Store Joe” Amabile and White House washout Sean Spicer sticking around long past their expiration dates thanks to disproportionate support from the audience. Bobby Bones was even charismatic enough to win the whole show despite never quite being able to keep up with his competitors’ fancy footwork (spoiler alert: we’ve ranked Bones last).

So who were the best (and worst) Mirror Ball champions of all time? Find out below.

Bobby Bones’s win is one for the history books. He’s the only winner to never top the leader board or have the top three cumulative score for their season. Bones proved that it’s not how you start but how you finish.

In a season with the most celebs ever (16!) Osmond was able to rise above the pack by charming and entertaining the audience week after week.

“Bachelorette” star Hannah Brown had the audience on her side more than the judges. With a new format change including a judges’ save and live voting, Brown was the only star never to fall in the bottom two throughout the season. Despite battling confidence issues along the way, Brown was able to deliver in the final hour with a fierce freestyle that helped clinch the championship.

Dancing is a universal language that communicates emotions directly and sometimes more powerfully than words. This held true with season 22 winner Nyle DiMarco, who showed that despite being deaf, he was still more than able to express himself.

Monaco was the first winner of “Dancing With the Stars,” and she was the prime example of exactly what the show is all about: someone with limited dance experience who grew week after week before the audience’s eyes.

Backed by Steeler Nation, former NFL player Hines Ward breezed through the competition with a cool, yet lovable confidence that made him undeniable to both the judges and viewers.

Having a compelling backstory can make you an audience favorite regardless of how well you can dance. Season 13 winner J.R. Martinez proved that despite his personal hardships (Army veteran and burn survivor) he had the dance skills for a well deserved win.

Season 5 of “DWTS” had several moments that will forever be etched in the show’s history, from Sabrina Bryan’s shocking elimination to Marie Osmond‘s fainting spell. In the midst of those watercooler moments, race car driver Helio Castroneves drove past the drama to a surprising win.

In a season that heavily favored female celebrities like Normani Kordei, Simone Biles, Heather Morris and Nancy Kerrigan, Jennings was able to separate himself from the pack with a swagger that went unmatched.

Rippon took home the Mirror Ball Trophy during the shortened four-week athletes-only season. While he electrified audiences, the short season didn’t allow us viewers to appreciate his journey as much as we would have liked to.

Derek Hough hit a home run winning his fourth Mirror Ball Trophy with former “American Idol” finalist and country star Kellie Pickler. Her infectious personality made her an instant favorite with fans from her first dance to her amazing and athletic freestyle.

Driver’s surprising win over presumed front-runners Katherine Jenkins and William Levy proved that audiences love to root for contestants who show growth in their season. All season long Driver would strive for perfection and made sure that he didn’t stop until he got a perfect score from the judges. It’s also worth noting that Driver was the first star to jump over his partner’s head, an athletic trick that other male stars have used since.

Burke, like several other winners, reigned supreme all season. While she was a solid dancer, her win was due in part to a relative lack of competition and her pairing with Derek Hough, who was one of the most popular and successful pros in the show’s history.

It was great to see Rumer Willis’s journey on “DWTS.” She came into her own and never got lost in the shadow of her superstar parents Demi Moore and Bruce Willis. She didn’t coast on her parents’ names to get her the win, she put in the work by delivering hard-hitting routines.

“Dirty Dancing” star Jennifer Gray proved that age is nothing but a number by becoming the oldest female contestant to win “DWTS” at the age of 53. She also proved how resilient she was by performing very technical and complicated routines despite battling a neck injury.

Every contestant who won their season by going all out on their freestyle should give thanks to Drew Lachey. His electrifying freestyle to Big and Rich’s “Save a Horse, Ride a Cowboy” is easily one of the most memorable routines in “DWTS” history and set the precedent for the decisive power of the freestyle.

Despite being the youngest winner in “DWTS” history at age 16, Laurie Hernandez took on every routine as if she’d been dancing for a lifetime. A combination of her bubbly personality and her gymnastics-trained rhythmic ability made her an unstoppable force in her season.

Rycroft earns a high placement on our list based on the fact that she competed in the first and only All-Stars season, defeating past “DWTS” heavy-hitters like Gilles Marini, Shawn Johnson and Sabrina Bryan. Melissa and her pro partner Tony Dovolani were one of the few couples who didn’t let the pressure deter them from letting loose and having fun. Also it was great to see Dovolani finally get his due after getting stuck with several less gifted partners during his “DWTS” career.

Emmitt Smith was one of those contestants who sheer personality and charm made us root for him early on. This big, masculine football player was so comfortable in his skin that he made it cool for the average American dude to get up and try ballroom dancing.

Season 8 was one of the most competitive seasons ever with stars like Gilles Marini, Melissa Rycroft and Lil Kim. Shawn Johnson started off in the middle of the pack, but came into her own as the weeks went by. She makes our top 10 based on her determination to win, but also the thrilling fact that she won by a 1% margin over presumed front-runner Marini.

Veteran ice skater Kristi Yamaguchi was one of those stars that you knew would win before the season even started. She was such a beast during her season that the only two weeks she didn’t top the leaderboard were a huge deal for the rest of the cast.

Ohno’s speed skating background played a huge part in his journey on “DWTS.” Each week Ohno’s routines were full of energy, speed and excitement, and he was matched by his partner, Julianne Hough.

As a longtime viewer there are certain contestants that you always hoped would be on the show. Alfonso Ribeiro was one of those contestants. He lived up to hype and then some by delivering iconic performances like his jazz routine that featured his signature Carlton dance from “The Fresh Prince of Bel-Air.”

One of the best things about “DWTS” is the emotional journey the show takes viewers on. No other contestant pulled on the audience’s heartstrings more than Bindi Irwin. Her father, wildlife conservationist Steve Irwin, was a beloved figure before his sudden and tragic death. Bindi was a shining example of how dance can be therapeutic, even nine years after her loss.

Six-time Mirror Ball champ Derek Hough had been criticized by fans for always being paired with predictably gifted ringers. His pairing with “Glee” star Amber Riley proved the naysayers wrong as the pair dominated their season with countless show-stopping routines even though the fuller-figured actress didn’t fit the same mold as the show’s previous winners. Riley also made history as the first and (unfortunately) only African-American woman to win “DWTS.”

Disney stars in the past had always come up short on “DWTS.” However, all that changed with Jordan Fisher. He brought an ease and flow to his movements that we haven’t seen from any other male celebrity on the show. Fisher also deserves a high ranking for being the celebrity with the most perfect scores (nine!) of any contestant.

Davis deserves a spot near the top for the simple fact that she’s the highest-scoring contestant in “DWTS” history with an average of 9.47 per judge, per dance. She proved to be unstoppable all season by delivering some of the most artistic and lyrical performances to date. She also helped her pro, Maksim Chmerkovskiy, win his first and only Mirror Ball Trophy.

Perfection! The lead singer of the Pussycat Dolls and her professional partner Derek Hough were a match made in “Dancing With the Stars” heaven. I loved how committed Nicole was to bringing out some of Derek’s best routines in the show’s history (check out their ’50s paso doble). She proved to be one of the most charismatic and dynamic celebrities the show has ever cast.