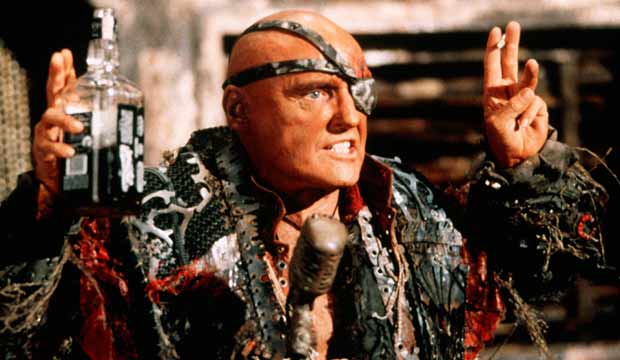 Dennis Hopper would’ve celebrated his 83rd birthday on May 17, 2019. The Oscar-nominated performer experienced many ups-and-downs throughout his career, with his off-screen antics often overshadowing his onscreen talent. Yet many of his movies have stood the test of time. In honor of his birthday, let’s take a look back at 15 of Hopper’s greatest films, ranked worst to best.

He burst onto the scene with the counterculture phenomenon “Easy Rider” (1969), which he also directed and co-wrote (with co-star Peter Fonda and Terry Southern). The story of two bikers (Hopper and Fonda) traveling across the country to sell some cocaine became a box office sensation, speaking to a disaffected youth tired of sanitized entertainments that didn’t reflect the world at large. The film brought Hopper, Fonda and Southern an Oscar nomination in Best Adapted Screenplay and made a star of Jack Nicholson, who competed in Best Supporting Actor.

Hopper stumbled with his next directorial effort, “The Last Movie” (1971), an obtuse, fragmented examination of American Imperialism. His substance abuse problems and erratic behavior also soured his reputation, although he still managed to secure periodic acting work in films such as “The American Friend” (1977) and “Apocalypse Now” (1979).

After a stint in rehab, he came roaring back with a trio of films in 1986: the teenage true crime drama “River’s Edge,” the inspirational sports story “Hoosiers,” and David Lynch‘s surreal, disturbing “Blue Velvet.” His role in “Hoosiers” earned him an Oscar bid as Best Supporting Actor, while the Golden Globes nominated him for both that movie and “Blue Velvet.” After years in exile, Hopper was back and would keep busy until his death in 2010, giving wild-eyed, teeth-gnashing performances as the villains in such films as “Speed” (1994), “Red Rock West” (1994), and “Waterworld” (1995). He even returned to directing with such titles as “Out of the Blue” (1982) and “Colors” (1988), the later of which he didn’t appear in.

On the TV side, Hopper earned an Emmy nomination for his performance in “Paris Trout” (Best Movie/Mini Actor in 1991) and starred in a TV series based on the film “Crash” (2005).