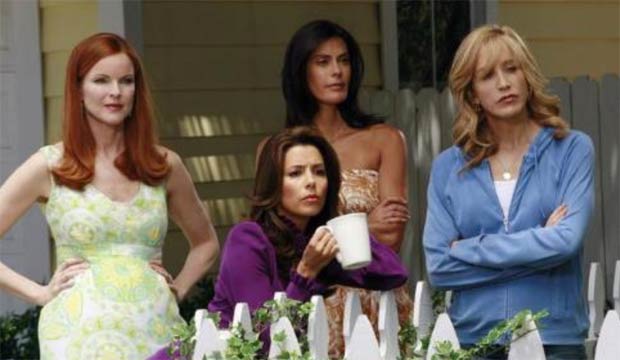 Was it a comedy? Was it a drama? Was it a soap opera? Let’s celebrate the 15th anniversary of the classic TV series “Desperate Housewives”!

In the Fall of 2004, creator Marc Cherry introduced us to the residents of Wisteria Lane. “DH” begins with the mysterious suicide of resident Mary Alice Young (Brenda Strong), and her group of friends wondering how they could not know their close friend was so desperate. Over eight seasons, Mary Alice narrates the ups and downs of her former neighbors from beyond her grave. Through flashbacks and a five-year flash forward between seasons four and five, we follow the nearly 20-year friendship and adventures of Mary Alice’s poker buddies: klutzy divorcee with a heart of gold Susan Mayer (Teri Hatcher) and her pursuit of the perfect mate; control-freak, frazzled wife and mother of four (later five) Lynette Scavo (Felicity Huffman) and her efforts to balance her desire to work with her surprising devotion to family; uptight perfectionist homemaker Bree Van De Kamp (Marcia Cross) and her search for the model family and career; and spoiled self-centered shopaholic Gabrielle Solis (Eva Longoria) and her desire to be rich and well-maintained at all cost.

We also met a great ensemble of supporting players including Lynette’s devoted husband Tom (Doug Savant), Gabrielle’s exasperated husband Carlos (Ricardo Chavira), Susan’s true love Mike Delfino (James Denton), neighborhood mean girl Edie Britt (Nicollette Sheridan), busybody Karen McCluskey (Kathryn Joosten), Bree’s self-entitled children Andrew (Shawn Pyfrom) and Danielle (Joy Jorgensen), and Susan’s long-suffering daughter Julie (Andrea Bowen). In addition, each season introduced new residents and a new mystery. Revelations about the characters’ pasts show we all have a story, and these series of incidents make us who we are, the good and the bad. But true friends stick together – through divorces, deaths, unexpected pregnancies, marriages, ill-mannered children, adultery, cancer, addiction and even plane crashes, tornadoes and a gun-toting housewife holding people hostage in a grocery store. “Desperate Housewives” offered these and so much more – including over 50 character deaths and at least seven times someone was hit by a vehicle.

“Desperate Housewives” was nominated for many awards through its run, and won some, including a few Emmys and Golden Globes. However, I think the reason it didn’t win more is that it was such a unique show and hard to categorize. Was it an hour-long comedy? Or a drama with some comedy? It was largely placed in comedy categories, but there were also such heart-wrenching tear-jerker moments that it’s difficult to consider it a true comedy. For eight years we laughed at, we cried for, we gasped in shock at the situations these women found themselves in. “Desperate Housewives” remains a unique, and to this day, completely enjoyable series.

Though the task was tough, tour our photo gallery above where we rank the 25 greatest “DH” episodes from worst to best.