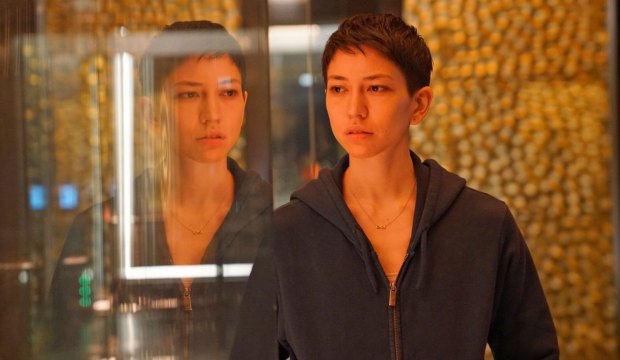 The limited series “Devs” aired its eight episodes from March 5 to April 16, 2020 as part of the “FX on Hulu” cross-promotion (Disney owns both companies since the Mouse House bought 20th Century Fox). But will the mind-bending sci-fi thriller appeal to Emmy voters? Scroll down for our exclusive video interviews with top awards contenders from the show.

FX has done exceedingly well in longform races at the Emmys with “The People v. O.J. Simpson” and “The Assassination of Gianni Versace” both winning Best Limited Series and multiple seasons of “American Horror Story” earning nominations. Hulu has been making inroads too; “The Looming Tower” earned multiple bids in 2019, and “The Act” won for Patricia Arquette‘s supporting performance, so “Devs” is certainly on a platform voters are well acquainted with.

And “Devs” has an impressive pedigree. It was created, written and directed by Alex Garland, who earned an Oscar nomination for scripting another eerie sci-fi tale, “Ex Machina.” And it stars Emmy nominee Nick Offerman (“Parks and Recreation,” “Making It”) as the CEO of a tech company that computer engineer Lily Chan (Sonoya Mizuno) thinks is responsible for the disappearance of her boyfriend.

SEEEmmys 2020 predictions slugfest: How many from ‘Mrs. America’ and ‘Hollywood’ for limited supporting races? [WATCH]

The Emmys used to have a bias against sci-fi and fantasy programs, and in some cases they probably still do, but by now there’s plenty of precedent for this kind of futuristic puzzle being recognized. Just look at two-time Best Drama Series nominee “Westworld” with its exploration of identity and artificial intelligence and two-time Best Drama nominee “Stranger Things” with its homage to the sci-fi and horror of the 1980s. And let’s not forget all the dragons populating the four-time Best Drama champ “Game of Thrones.”

In Best Limited Series the television academy has awarded the alien abduction saga “Taken” and nominated the sci-fi mystery “The 4400,” in addition to the more recent success of the aforementioned “AHS” franchise. So the Emmys have come a long way, opening the door for a wider variety of stories and genres. Will “Devs” carry on that tradition? Follow the links below to see what some of the show’s creative team has to say.