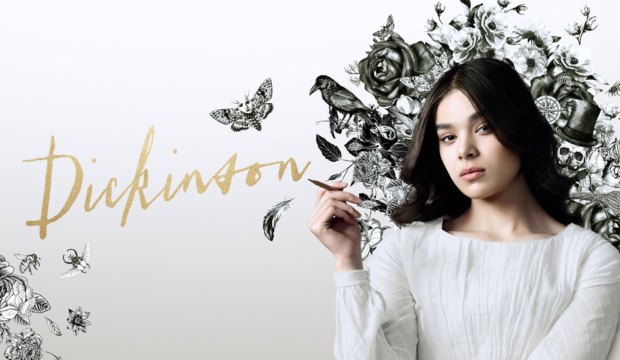 “Dickinson” premiered in November 2019 as one of the original series that launched the Apple TV+ streaming service. The comedy tells a 19th century story but with a modern sensibility. Will its unique approach appeal to Emmy voters? Scroll down for our exclusive video interviews with top contenders from the show.

The series re-imagines the life and times of poet Emily Dickinson (played by Hailee Steinfeld) as she fights against the restrictive gender roles of 19th century America. She is in love with her best friend Sue (Ella Hunt), but Sue is engaged to marry Emily’s brother Austin (Adrian Enscoe). And her parents don’t approve of her artistic pursuits. The show is deliberately anachronistic in its language, tone and music, trying to capture spirit of her rebellious poetry for a contemporary audience.

The series earned a 2020 GLAAD Media Award nomination for Best Comedy Series for its depiction of the queer literary icon, and real-life artists are often popular with the television academy, as with recent Emmy-winning programs like “Behind the Candelabra,” “Bessie” and “Fosse/Verdon,” not to mention the fictional artists portrayed in “30 Rock,” “Barry” and “The Marvelous Mrs. Maisel.”

“Maisel” is also a period comedy about an iconoclastic woman challenging gender norms, and not only did it win Best Comedy Series in 2018, it won 16 Emmys overall over its first two seasons thanks in no small part to its high production values. “Dickinson” could similarly get support in Creative Arts categories for its costumes, production design, makeup and hairstyling, music and more. And the show’s 23-year-old leading lady has already been nominated at the Oscars (“True Grit”) and Golden Globes (“The Edge of Seventeen”), so she brings prestige to the project that could attract the eyeballs of awards voters.

How do you think “Dickinson” will do when the television academy chooses their Emmy nominees? Follow the links below to see what some of the show’s creative team has to say.