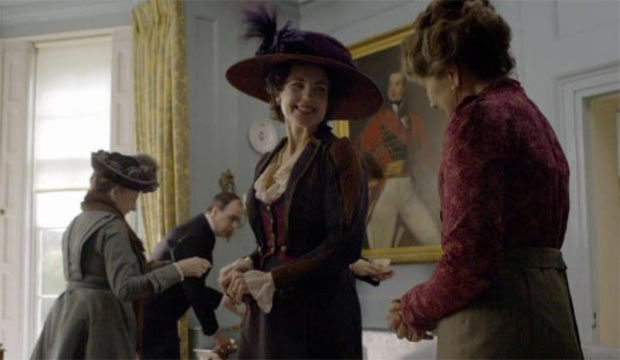 The beloved drama series “Downton Abbey” now has a second feature film (“Downton Abbey: A New Era”) ready to rake in a fortune. It’s been over a decade since it burst upon the television scene, so we’ve recently revisited the wonderful world of the British historical drama to rank the greatest 25 episodes in the photo gallery above. It’s true that this series is a melodrama, perhaps even a glorified soap opera. But its central theme is change, and how real-life historic events, as well as personal joys and crises, affect the fictional aristocratic Crawley family and their servants in England during the pivotal years 1912-1926.

The six seasons of “Downton” begins with the sinking of the “Titanic” in April of 1912, and the impact it has on the Crawley family, who has presided over the estate for generations. Several stories swirl at once, with dramas surrounding both the family “upstairs” and their staff “downstairs.” Robert Crawley (Hugh Bonneville), the current Earl of Grantham, his American wife Cora (Elizabeth McGovern), and their three daughters, headstrong Mary (Michelle Dockery), put-upon Edith (Laura Carmichael) and sweet Sybil (Jessica Brown Findlay) fight to keep control of their estate in a time when women couldn’t own property, and there are only female heirs. Helping to oversee matters is Robert’s mother the Dowager Countess Violet (Maggie Smith). Their household is run by the loyal butler Carson (Jim Carter), along with Mrs. Hughes (Phyllis Logan), who is in charge of the maids, several footmen, valets, lady’s maids, housemaids and cooks.

The series follows this cast of characters through 14 years of global change: a world war, the Second Industrial Revolution (most especially the impact of electricity and the telephone), women’s rights, even new “scandalous” fashions. With these changes, cultures clash between the belief in the separation of classes and the belief that one in a lower station can rise to a higher one through work, or even through marriage between classes. There are also instances showing that no matter rank in class, people at heart are the same: some are conniving, some are compassionate, some determined to live in the ways of tradition, some ready to move forward into a new world with new possibilities.

This successful British costume drama received much praise during its run, earning critical acclaim as well as acquiring a huge, faithful audience. It received numerous award nominations throughout its run, including Emmy nominations for Best Drama Series each year of its run, winning for Best Miniseries in 2011 (before moving into drama categories); Golden Globe nominations for Best TV Drama four consecutive years, winning in 2012; and an outstanding three Screen Actors Guild wins for as the best drama TV ensemble in 2013, 2015 and 2016. Several of the cast and crew were nominated for awards throughout the show’s run. In 2015, Joanne Froggatt won a Golden Globe for her portrayal of Anna the lady’s maid, and Dame Maggie won three Emmys, two Golden Globes and one Screen Actors Guild Award.

“Downton Abbey” provided endless stories of love, loss, deceit, blackmail, friendships, enemies, divorce and death. We laughed, we cried, we gasped in shock. Hopefully, the new feature film from creator Julian Fellowes will live up to our best expectations.