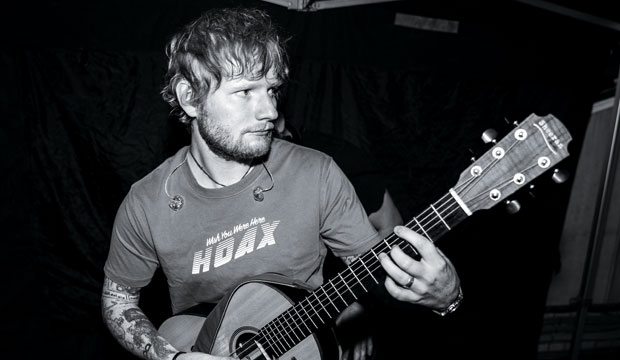 2021 marks 10 years since the now-30-year-old Ed Sheeran released his debut studio album, “+,” and his breakthrough single, “The A Team.” So we’re counting down the best songs of his career (so far). Take a walk down memory lane with his songs below. Let us know what you think of our pick for his number-one in our comments.

Sheeran had been recording and releasing music independently for years before his record deal, so by the time he turned 20 in 2011 he already had a substantial discography. His first Grammy nomination came in 2013: Song of the Year for “The A Team.” He actually earned his Best New Artist bid the following year, and then he earned an Album of the Year nom for his second studio album, “x.” He won his first Grammys in 2016, when he claimed Song of the Year and Best Pop Solo Performance for “Thinking Out Loud.”

And yet that wasn’t the peak of his commercial success. His third album, “÷,” was another blockbuster, boasting the best worldwide sales of any album in 2017 and earning him two more Grammys for Best Pop Solo Performance (“Shape of You”) and Best Pop Vocal Album. “Shape of You” was itself a landmark career moment for Sheeran. Not only was it his first number-one hit on the Billboard Hot 100, it spent 12 weeks on top, broke records on Spotify, and spent more weeks in the top 10 than any other song in history up to that point (that record has been broken by a couple other singles since then).

Sheeran’s style has evolved over the course of his career. He’s arguably best known for his sensitive, romantic, singer-songwriter ballads like the aforementioned “Thinking Out Loud” and “Perfect.” But he has also ventured into dance, R&B, and hip-hop; his “No. 6 Collaborations Project” album featured an eclectic list of guest artists ranging from fellow pop star Justin Bieber to hip-hop musicians Chance the Rapper and Travis Scott. And he’s done additional work with other artists, earning a songwriting Grammy nom for Bieber’s “Love Yourself,” and picking up additional Album of the Year bids as a featured artist on Taylor Swift‘s “Red” and The Weeknd‘s “Beauty Behind the Madness.”

So his music runs the gamut, as can be seen and heard on our above list. Do you have favorite songs of his that you think we’ve missed?