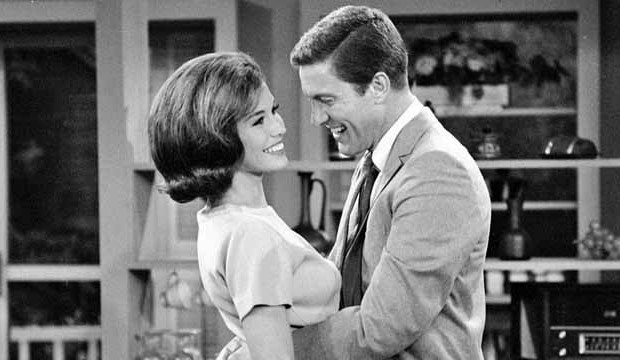 Family comedies have gone to Schitt. “Schitt’s Creek” that is. The little Canadian comedy series that airs on POP and streams on Netflix has hit Emmy paydirt in its sixth and final season, earning  15 Emmy nominations including best comedy series, actor for Eugene Levy, actress for Catherine O’Hara, supporting actor, writer and director for Dan Levy and supporting actress for Annie Murphy.

Sort of a reverse “The Beverly Hillbillies,” the series follows a seriously vapid, dysfunctional family, John and Moira Rose and their adult children David and Alexis,  who lose their family fortune and end up living in a rundown motel in Schitt’s Creek, a tiny rural town which is the only asset they still own. And “Schitt’s Creek” is a family affair with Eugene Levy creating the series with his son Dan, who plays his eldest on the show. And the comedy legend’s daughter Emily also is featured as the waitress in the local café. The series also reunites Eugene Levy with O’Hara who came to fame as stars and Emmy Award-winning writers of the classic sketch comedy series “SCTV.”

Emmys have loved family comedies since 1953 when ABC’s “The Adventures of Ozzie and Harriet” earned a nomination in the category, then known as best situation comedy. It lost to CBS’ landmark sitcom “I Love Lucy.” It was the only time the series, which ran until 1966, was nominated for top comedy. “Ozzie and Harriet” had begun as a radio show and just as “Schitt’s Creek” was a family affair with Ozzie Nelson, his wife Harriet and their sons David and Ricky playing fictionalized versions of themselves. Though the on-screen Ozzie Nelson never seemed to work, his off-screen self created and produced the series and wrote and directed over 300 episodes. His younger brother Don also wrote for the show.

Don Nelson said in a 1998 L.A. Times interview said audiences loved the Nelsons because they were a “family that could be trusted. We have been blamed for all the ills of the ‘50s and ‘60s and have been praised for all the good things [about those decades] because it presented a way of life that was a little idyllic. We would manufacture a show out of whether it was appropriate for David to now have his own key or Oz getting stuck on the top of the house. It was the harmless kind of things that affected the family.”

Danny Thomas was a popular nightclub entertainer and star of such movies 1952’s “The Jazz Singer” when he came to television in 1953 in ABC’s “Make Room for Daddy,” as a busy nightclub entertainer trying to juggle his work and family lives. The series wasn’t the biggest hit out of the starting gate with audiences, by the TV academy awarded the sitcom best new series in 1954 and then the top comedy prize in 1955. Thomas also won for his performance. The series, which would eventually move to CBS and renamed “The Danny Thomas Show,” became one of the most popular shows and ran until 1965. The comedy would win a total of five Emmys

And it was a 1960 episode of  “The Danny Thomas Show” that served as the pilot for the beloved family sitcom, CBS’ “The Andy Griffith Show,” a sweet genial homespun comedy series starring Andy Griffith as a widowed sheriff in the small North Carolina town of Mayberry raising his young son Opie (Ronny Howard) with the help of Aunt Bee (Frances Bavier).  Sheriff Andy Taylor’s cousin, the nervous Barney Fife (Don Knotts) was his inept deputy. The series, which aired from 1960-1968, never won the outstanding comedy series Emmy, but earned six with five of those going to Knotts’ for his brilliant comedic turn as Barney and one to Bavier.

That decade, though, was dominated by Carl Reiner’s brilliant CBS sitcom “The Dick Van Dyke Show,” which earned 23 Emmy nominations and won 14 Emmy, including three for comedy series, during is 1961-66 run on the network. The series, which also starred Mary Tyler Moore as Rob Petrie’s (Van Dyke) capri-wearing wife Laura, was set behind the scenes of the New York-based TV comedy-variety series “The Alan Brady Show” — Reiner played Brady — and was based on Reiner’s experiences appearing with Sid Caesar in the 1950s on the two classic series “Your Show of Shows” and “Caesar’s Hour.” Petrie was the head writer with Rose Marie and Morey Amsterdam as his co-writers Sally and Buddy.

Reiner recalled in 2014 L.A. Times interview with me that he was talking to himself while driving one day in New York. “I said, ‘You live in New Rochelle, you have wife and two kids, and you go to work in New York. At the office you talk about what happened at home and when you get home you talk about what happened in the office. I said ‘That’s it. I’m going to write what I knew about the home life of a writer who works in variety.”

A far different family comedy dominated the 1970s, CBS’ groundbreaking “All in the Family.” The Tiffany network was known for its popular “rural” comedy series including “The Beverly Hillbillies” and “Green Acres.” But in 1971, the network decides to change course and become more urban and purged these still-popular series. And it was during that pivotal year, CBS premiered “All in the Family.” Created by Norman Lear who also wrote for the series, and produced by Lear and Bud Yorkin, the series starring Carroll O’Connor, as the outspoken bigot Archie Bunker who had an opinion for everything. Jean Stapleton as his longsuffering, sweet wife Edith, Sally Struthers as their daughter Gloria and Rob Reiner as her Polish-American hippy husband Mike whom Archie refers to as “Meathead.”

The series covered numerous subjects including homosexuality, menopause, rape, the Vietnam War, menopause and of course bigotry. The series, which changed the sitcom landscape, was nominated 55 Emmys and won 22 during its nine-season run including four best comedy series accolades.  O’Connor won four times; Stapleton earned three; Struthers and Reiner both received two and Reiner. “Archie was afraid of tomorrow,” Lear told me in a 2012 L.A. Times interview, “That was his big problem. He was afraid of the progress that brought black families into his neighborhood.”

Lear had developed the series from the hit British comedy “Till Death Us Do Part,” but never saw the original until after “All in the Family” premiered. He discovered that series had “none of the softness” of ‘All in the Family.” “We paid a lot of attention to what was going on inside our families,” Lear said. “What were our kids’ problems, what were our problems and what were the problems we were reading about every day that impacted us and impacted our friends.