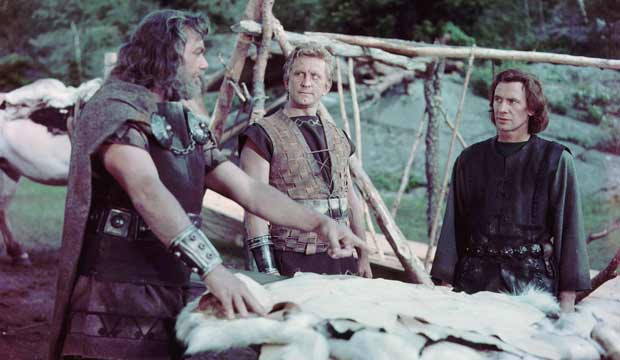 Ernest Borgnine would’ve celebrated his 102nd birthday on January 24, 2019. The Oscar-winning actor kept working up until his death in 2012 at the age of 95, racking up over 200 credits across film and television. But how many of those titles are classics? In honor of his birthday, let’s take a look back at 12 of Borgnine’s greatest films, ranked worst to best.

Born in 1917, Borgnine turned to acting after a stint in the Navy. Though he was often cast as a supporting player, he is perhaps best remembered for his leading role in “Marty” (1955), a small-scale drama about a middle-aged butcher who finds romance with a spinster school teacher (Betsy Blair). Shot on a modest budget in just 16 days, the film was a box office smash, winning four Oscars including Best Actor for Borgnine, Best Picture, Best Director for Delbert Mann, and Best Screenplay for Paddy Chayefsky (who adapted the script from his own teleplay).

He found success on the small screen with the sitcom “McHale’s Navy,” which cast him as a tough yet charming naval commander during WWII. The part brought him an Emmy nomination in 1963, and he would compete at the TV Academy again for “All Quiet on the Western Front” (Best Movie/Mini Supporting Actor in 1980) and “ER” (Best Drama Guest Actor in 2009).

Borgnine received the life achievement award from the Screen Actors Guild in 2011 when he was 94 years old. He continued acting well into his golden years, find a new generation of fans as the voice of Mermaid Man on “SpongeBob SquarePants.”

Tour our photo gallery above of Borgnine’s 12 greatest films. Our list includes his Oscar-winning role plus “The Wild Bunch,” “The Dirty Dozen,” “The Poseidon Adventure” and more.

Kaouther Ben Hania ('The Man Who Sold His Skin') on her Tunisian International Feature Oscar contender: '…

'Cats' redeemed? Thanks to Taylor Swift, the movie musical could win more Grammys than The…