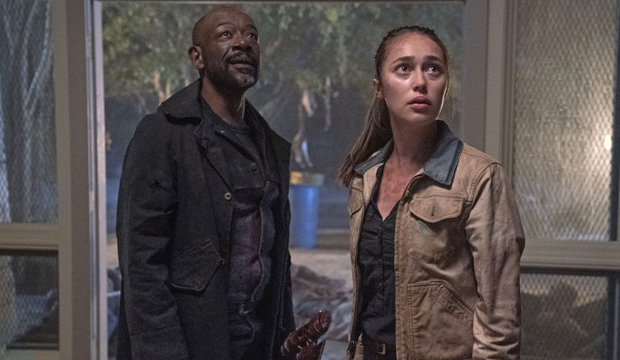 The last time we saw Morgan (Lennie James), Alicia (Alycia Debnam-Carey) and the other survivors on “Fear The Walking Dead,” they were planning on traveling to the new place Morgan was building. The only problem? Strand (Colman Domingo) chose not to go with his friends to safety, and instead went back to Virginia (Colby Minifie) and her group of ruthless Pioneers. When “Fear” returns on April 11, 2021 for the second half of Season 6, what can fans expect? Scroll down for a list of exciting spoilers released by AMC.

How many episodes?
The second half of this season will consist of nine episodes, up from the seven that aired in the fall of 2020. Thus, the entirety of Season 6 will be 16 episodes, which is on par with what “Fear the Walking Dead” has been producing for the past four years.

New guest stars
A trio of guest stars will join the cast this year: John Glover, Nick Stahl and Keith Carradine. It’s still unclear how long these famous faces will be around for, and whether they’ll be playing friends or foes.

SEE ‘The Walking Dead’ deaths in order: Most shocking of all time

AMC’s official description
“As Morgan’s bid to free the remaining members of the group becomes bolder, Virginia grows increasingly desperate to find her sister and protect the settlements from forces working inside and outside her walls. The second half of Season Six reveals the impact of what living under Virginia’s control has done to each person in this group, who once saw themselves as a family. New alliances will be formed, relationships will be destroyed, and loyalties forever changed. When everyone is forced to take sides, they discover the meaning of, ‘The End is the Beginning.'”