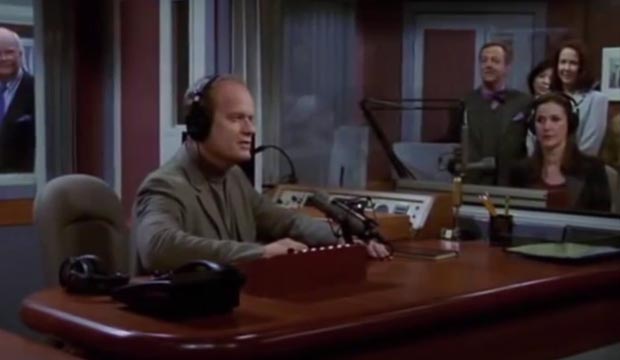 Looks like that “Frasier” reboot is going to happen after all. It will be part of the line-up on the upcoming Paramount+ streaming network. That is to be the new name for CBS All Access, which has a trio of hits already with multiple seasons of “The Good Fight” and “Star Trek: Discovery” and a boffo first edition of “Star Trek: Picard.”  “Frasier” is a jewel in the Paramount Studios crown and this move makes a lot of dollars and sense.

In a 2019 appearance on “The Late Late Show with James Corden,” Kelsey Grammer gave up some of the secrets of the “Frasier” revival. “It is a different story: the same group of characters, but in a different setting. Something has changed in their lives.” He then referenced the passing of the actor who played his father. “John Mahoney died over a year ago and we would deal with that, dad being gone.” The “we” could well included others from the “Frasier” cast including David Hyde-Pierce, who played the neurotic Niles; Jane Leeves as the English rose Daphne who finds love with Niles; and Peri Gilpin, who resonated as the raspy-voiced radio producer Roz.

In the series finale, Frasier was seen en route to Chicago, where he was hoping to make a new life with matchmaker Charlotte (Laura Linney). Grammer hinted that Frasier could still be living in the Windy City but was wary to reveal anything about his marital status. As for what his character is doing to keep himself busy these days, the actor says that decision is still up in the air. “He’s past the radio show. He might be an art dealer. He might be a professor. We don’t know yet.”

Grammer characterizes the reboot as a new chapter, rather than a continuation of the old storyline. Referencing the character’s history, first on “Cheers” and then on his own show, Grammer says “this will be the third act of ‘Frasier’ rather than trying to pick it up, like ‘Will & Grace’ did, right where they were.”

And that could be the key to finding further success at the Emmys.  Remember, “Will & Grace” was all but ignored by the Emmy Awards for its three-season revival on NBC. The original edition of  “Frasier” ran for 11 seasons beginning in 1993 winning a then-record 37 Emmys before it signed off in 2004. That benchmark has since been eclipsed by “Game of Thrones,” which won a whopping 59 Emmy Awards.

Grammer would certainly like to contend again. Among those Emmy wins for “Frasier” were four for him as Best Comedy Actor. That haul has him sharing first place with three other funny fellows: Carroll O’Connor (“All in the Family”), Michael J. Fox (“Family Ties”) and Jim Parsons (“The Big Bang Theory”).