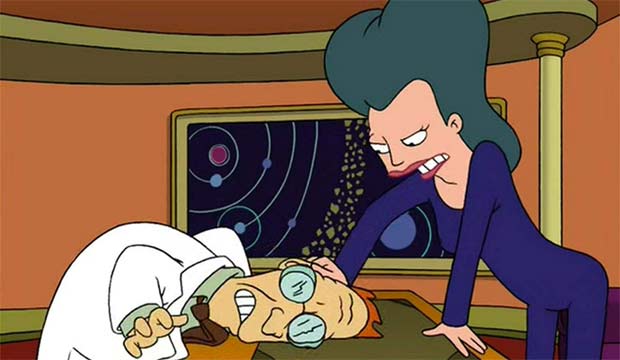 Good news everyone! This year marks the 20th anniversary of “Futurama’ premiering on television. To mark this momentous celebration, we encourage you to grab a Slurm, hop into a Freedom Day tub, turn on a marathon of “Everybody Loves Hypno-toad” and enjoy our photo gallery of the top 40 episodes of the Emmy winning sci-fi animated comedy, ranked worst to best. Click through our photo gallery above and see where your favorite episode is ranked.

The show was the brainchild of “Simpsons” creator Matt Groening and developed by Groening and “Simpsons” writer David X. Cohen. The show is centered on Philip J. Fry (Billy West), a pizza-delivery boy in 1999 whose life is going nowhere fast. On December 31, 1999 he accidentally gets himself frozen in a cryogenic tube and awakens on the same day 1,000 years later. As he starts to put his life back together he is joined by Professor Hubert Farnsworth, his senile, grand-nephew who employs him at Planet Express delivery company, Turanga Leela (Katey Sagal), a sexy cyclops space captain and Bender (John DiMaggio), a robot bending unit who also specializes in alcoholism, larceny and various other felonies. The rest of the Planet Express crew consists of Dr. John Zoidberg (West), a lobster-like alien physician whose knowledge of human anatomy is questionable at best and is also dirt poor, Hermes Conrad (Phil LaMaar), a Jamaican bureaucrat whose love of accounting is just as big as his love of limbo-ing and Amy Wong (Lauren Tom), a ditzy astrophysics graduate student who’s also an heiress to the western hemisphere of Mars.

Groening started conceiving of the idea for the show in the mid-1990’s when Fox expressed interest in having him create another animated series after the runaway success of “The Simpsons.” He brought on Cohen to help develop the show and pitched the series to the network in April of 1998. Fox immediately ordered 13 episodes, but Groening and Cohen soon ran into trouble with the network, which had problems with some of the show’s darker aspects such as Bender’s behavior towards others and the appearance of suicide booths. Groening stuck to his guns and allowed the show to develop along the vision that both he and the show’s writing staff wanted.

“Futurama” premiered on March 28, 1999 to 19 million viewers and mostly glowing reviews. Hahn Nguyen of IndieWire wrote a very positive notice saying, “What makes this show sublime is how it takes pride in courting a little-served audience – the uber nerds – with involved references to math and science,” and Terry Kelleher of “People” gushed, “I decided to embrace this show when Richard Nixon’s disembodied head bit Fry on the arm.” The show would continue to get respectable ratings but Fox’s constant shuffling of the program’s time slot and lack of promotion of new episodes made regular viewership a tough task. Also, settling to air at 7:00 pm on Sundays often meant the show was pre-empted by coverage of sporting events that would go on too long. Midway through the show’s fourth season, Fox elected to stop buying episodes of “Futurama,” effectively cancelling the program.

Adult Swim acquired the syndication rights to the show in 2002 and was the centerpiece of their initial late night lineup along with Fox’s other cancelled series, “Family Guy.” The reruns drew impressive ratings and in 2005, Comedy Central began negotiating to acquire the rights to the show including new episodes which were announced in 2006 in the form of four direct-to-DVD movies. In 2009, the success of those movies led Comedy Central to announce new episodes of “Futurama” would finally start airing, which started on June 24, 2010. The show would go on for two more seasons. The series finale, “Meanwhile,” broadcasted on September 4, 2013.

While some animated shows have taken a while to get noticed at the Emmys, “Futurama” has been recognized from its first season on Fox all the way through its final season on Comedy Central. The show received 12 nominations all together and won six, including two juried awards for Individual Achievement in Animation. It claimed the prize for Best Animated Program twice, in 2002 for “Roswell That Ends Well” and in 2011 for “The Late Philip J. Fry.” Veteran voice actor Maurice LaMarche would claim the honor for Best Character Voice-Over Performance in both 2011 and 2012 for “Lrrreconcilable Ndndifferences” and “The Silence of the Clamps,” respectively.

Can you guess which episode is ranked first in our gallery above? Some of the ones near the top include: “A Big Piece of Garbage,” “The Problem with Popplers,” “Meanwhile,” “Where No Fan Has Gone Before,” “Jurassic Bark” and “The Day the Earth Stood Stupid.”