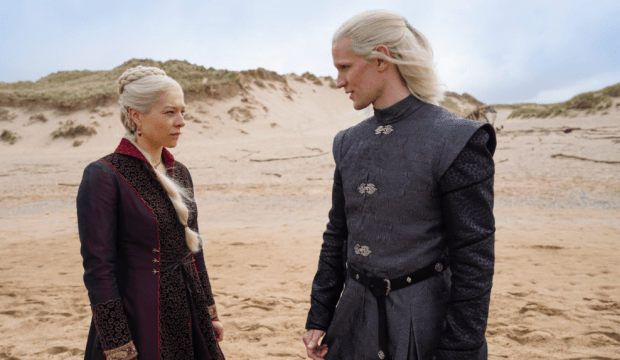 Will the fan disappointment over the final season of “Game of Thrones” subsided enough by 2022 that the world will be ready to return to Westeros? HBO is banking on that outcome. The cable network has a “Game of Thrones” prequel series called “House of the Dragon” ready to debut on HBO Max next year.

“House of the Dragon” will expand the world of the megahit fantasy series, telling a story about the golden-haired, dragon-riding royals of House Targaryen – the family that produced Daenerys Targaryen (Emilia Clarke) and Jon Snow (Kit Harington) – two centuries before the events of “Game of Thrones.” It’s based on “Fire & Blood,” a novel by George R.R. Martin that was written as a companion to his “A Song of Ice and Fire” series. The first season will be 10 episodes long. It’s the first project to make it to series out of a number of “Game of Thrones” spin-offs HBO has in development. Back in 2019, HBO actually shot a pilot for a “Game of Thrones” prequel set to star Naomi Watts. But the network decided not to move forward with that one. The day the series was scrapped, “House of the Dragon” was announced.

Here’s everything we know so far about “House of the Dragon,” codenamed “Red Gun.”

When does ‘House of the Dragon’ premiere?

“House of the Dragon” will start airing on HBO and streaming on HBO Max in 2022. In a new trailer released by HBO on October 5, no date was revealed other than the 2022 launch.

How can I watch the trailer for ‘House of the Dragon’?

Who’s in the ‘House of the Dragon’ cast?

The prequel has a strong cast with a higher number of recognizable names than “Game of Thrones” had in Season 1. HBO has announced much of the show’s main cast already.

Paddy Considine – who’s most recently known for “The Outsider” but to us will always be the dad from Jim Sheridan’s “In America” – will play King Viserys Targaryen, a good man whose decency makes him perhaps ill-suited for the task of ruling Westeros. He was chosen by the Great Council of the lords of Westeros to be the king after his grandfather Jaeharys Targaryen died.

Emma D’arcy (Amazon’s short-lived horror-comedy “Truth Seekers”) plays Princess Rhaenyra Targaryen. Rhaenyra is the king’s first born, but she’s not a man, so the Iron Throne is not her birthright — even though she has pure Valyrian blood and is a dragonrider.

“The Crown” and “Doctor Who” star Matt Smith will play Prince Daemon Targaryen, King Viserys’ younger brother and the heir to the throne. He’s a dragonrider and a brave warrior, but he’s unstable and has a cruel streak a mile wide. Otto Hightower really, really doesn’t want him to be next in line.

“Doctor Who” actor Steve Toussaint is Lord Corlys Velaryon, also known as “the Sea Snake.” He’s leader of House Velaryon, a rival house to House Targaryen, and the greatest seaman in the history of Westeros. He’s married to Princess Rhaenys Velaryon (“Nurse Jackie” co-star Eve Best), a Targaryen dragonrider who was passed over by the Great Council for the monarchy in favor of her cousin Viserys because he’s a man and she isn’t.

“Ex Machina” actress Sonoya Mizuno plays Mysaria, a former slave who has worked her way up to becoming Prince Daemon’s most trusted advisor.

And “The Serpent” star Fabien Frankel will play Ser Criston Cole, a common-born Dornish swordsman (remember Dorne? That’s where Oberyn Martell [Pedro Pascal] was from). He’s climbing his way up in the Westerosi social order thanks to his skill with the blade. Later, he’s known as “Criston the Kingmaker” after he plays a pivotal role in one of the story’s most important moments, according to Inverse.

Who’s working behind the scenes?

“House of the Dragon” is co-created by “A Song of Ice and Fire” and “Blood & Fire” author George R.R. Martin and Ryan Condal, previously best known for creating the sci-fi series “Colony.”

Condal and Miguel Sapochnik – director of some of “Game of Thrones’” biggest episodes, including “Hardhome,” “The Battle of the Bastards,” and “The Long Night” – will be co-showrunners. Along with Martin, Condal, and Sapochnik, executive producers include Vince Gerardis, Ron Schmidt, and writer Sara Lee Hess.

Sapochnik will direct the pilot and additional episodes. Other directors include Clare Kilner, Geeta V. Patel, and Greg Yaitanes, the latter of whom also gets a co-executive producer credit. According to Insider, the show’s writing staff reportedly includes “Colony” writer Wes Tooke, “Watchmen” writer Claire Kiechel, and Ti Mikkel, who has worked as Martin’s writer’s assistant.

“Game of Thrones” and “Westworld” composer Ramin Djawadi will provide the score.

What will ‘House of the Dragon’ be about?

“Fire & Blood” is a faux-history book covering the reigns of many Targaryen monarchs, and “House of the Dragon” seems to be adapting only one section, which is about the reign of King Viserys I and the Targaryen civil war called the “Dance of Dragons.” At the start of the story, Viserys has no male heir, so the Targaryen next in line for the Iron Throne is his brother Daemon, who has inherited the infamous Targaryen madness (“It is said that whenever a Targaryen is born, the gods toss a coin in the air…”). Viserys doesn’t want Daemon to be king, he wants his daughter, Rhaenyra. When Viserys officially names her as his successor, it leads to infighting and backstabbing that over the course of years develops into the “Dance of Dragons,” where Rhaenyra fights her half-brother Aegon II – Viserys’ son with his second wife, Alicent Hightower – for the throne. But that comes later, and Aegon hasn’t been cast yet. Season 1 will likely be a lot of setting up of the larger conflict to come, like Season 1 of “Thrones” was.

Will there be dragons in the ‘House of the Dragon’?

You know it! In fact, there will probably be even more dragons than there were on “Game of Thrones,” because dragons had not yet gone extinct and all the great Targaryens had a fire-breather of their own.

On the show, there will likely be at least four: Daemon’s Caraxes, known as “the Blood Wyrm” for his red color and fearsomeness; Rhaenyra’s Syrax; Rhaenys’ Meleys, one of the fastest dragons in Westeros; and Aegon’s golden dragon Sunfyre. And there will probably be more as the series goes on and the Dance of Dragons begins.

HBO released some dragon concept art last year. The “House of the Dragon” dragons seem like they’ll look a little different than their “Game of Thrones” counterparts – a little sleeker and more colorful, if this concept art holds true.

Will Travis Fimmel be in the ‘House of the Dragon’?

Fans of “Vikings” were ecstatic last year when a rumor emerged that Travis Fimmel – best known for his role as Norse hero Ragnar Lothbrok on History and Amazon’s beloved historical drama – was being considered for the role of Daemon Targaryen. However, that rumor didn’t pan out, as Matt Smith is playing Daemon. Travis Fimmel is currently on another HBO Max show, the weird sci-fi series “Raised by Wolves.”

Who will play Daemon Targaryen in the ‘House of the Dragon’?

Daemon Targaryen, a fan-favorite character from “Fire & Blood” due to his swaggering, swashbuckling time spent away from King’s Landing forging his own destiny after being denied by his brother Viserys, will be played by Matt Smith, an actor already well-known to audiences for his roles in two British institutions.

Smith played the Eleventh Doctor on the long-running science fiction series “Doctor Who” from 2010 to 2013. He’s the youngest Doctor ever. He’s also known for playing Prince Philip in the first two seasons of “The Crown.”

As the Doctor, he was famous for his swoopy brown hair, so it’s quite striking to see him with his blond Targaryen wig.

How did Daemon Targaryen die?

Spoiler warning! In “Fire & Blood,” Daemon met his end during a dragon battle at Harrenhal, a castle that appeared many times on “Game of Thrones,” including the time Jaime Lannister (Nikolaj Coster-Waldau) saved Brienne of Tarth (Gwendoline Christie) from the bear pit.

During the Dance of Dragons, Daemon flew to Harrenhal on Caraxes, and waited for his nephew Aemond, Viserys and Alicent’s second son, to come fight him. Aemond showed up with his tremendously powerful dragon Vhagar, and they had a spectacular aerial fight that ended with the deaths of all four participants when the dragons plummeted from the sky into the Gods Eye lake. No one could have survived a crash of such speed and force, but Daemon’s body was never recovered, so there are stories that he survived and went to live out his days in peace elsewhere.

Some version of this fight will probably happen on “House of the Dragon,” but not until late in the show.

Carrie Coon and Morgan Spector ('The Gilded Age') on their characters' 'very sexy, ambitious and…

'Succession' Emmy submissions: How many of its 38 entries (including 16 actors) will it win?

Emmy Experts slugfest: Will 'This Is Us' get a farewell hug? [WATCH]