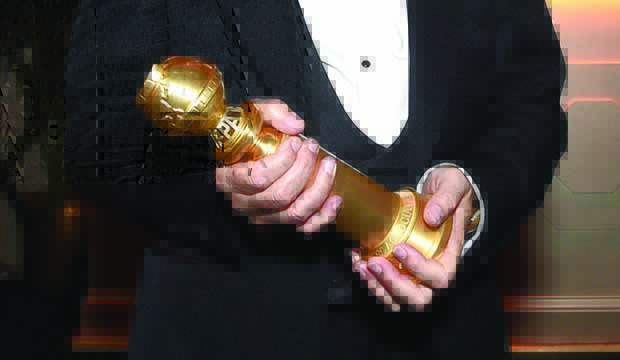 It will come as a shock to precisely no one reading these words that the Golden Globes are especially difficult to predict because they rarely follow any established pattern. That goes double for the TV series victors. While the Emmys are honoring either ABC’s “Modern Family” (five) and HBO’s “Veep” (three) for eight consecutive years in the Best Comedy Series category, the Globes will be paying tribute to fledgling streaming comedies like Amazon’s “Transparent” and “Mozart in the Jungle.” Sometimes, that makes it a trendsetter in honoring the new and buzzworthy. But it’s doubtful that the announced 103 racially and ethnically mixed new Globes voters will radically alter this picture.

With nominations for the 80th Golden Globes coming December 12, the combined predicted top five favorites on Gold Derby for drama and comedy series as of this post are:

“The Crown” from Netflix (vying for its third Globe series honor); “Severance” from Apple TV+; “House of the Dragon” from HBO; AMC’s final season of “Better Call Saul”; and the Paramount Network’s “Yellowstone”

“Abbott Elementary” from ABC; Hulu’s “Only Murders in the Building”; “Hacks” on HBO Max; “The Bear” from FX; and HBO’s “Barry”

Now, let’s look at the Best Drama Series category over the past 15 years of Globes history and how it’s been impacted by the Emmys (if at all). In fact, there is no way that the Emmys can serve as a harbinger of the Globes in the category this year since the Emmy winner in September, “Succession,” isn’t eligible at the Golden Globes in January. But there were two occasions since 2008 when the Emmys were a series forerunner to the Globes: in 2012 and ’13, when both awards went for Showtime’s “Homeland,” and 2017-18, when each honored Hulu’s “A Handmaid’s Tale.” There were five occasions, however, when the Globes blazed the trail for the Emmys: 2008 when both went for AMC’s “Mad Men,” 2014 when the choice for each was AMC’s “Breaking Bad,” in 2020 and 2022 (HBO’s “Succession) and in 2021 (“The Crown”).

SEEWill Emmy bridesmaid ‘Severance’ be avenged at the Golden Globes?

In comedy series, there were three times since 2008 when the Emmys foretold the Golden Globes: 2008-09 when the choice for both was NBC’s “30 Rock,” 2019 when both went for Amazon Prime’s “Fleabag” and 2020-21, when the winner of both the Emmy and the Globe was “Schitt’s Creek.” Only once during that time did the Globes serve as a precursor to the Emmys in the comedy series lineup: in 2018 when both selected “The Marvelous Mrs. Maisel.”

During those years when the Globes and Emmys went their own way in the categories, the Hollywood Foreign Press Association made some predictably unpredictable (some might say free-spirited) picks. In the Musical/Comedy category, those included Fox’s “Glee” (2010 and ’11) and “Brooklyn Nine-Nine” (2014); Amazon’s aforementioned “Transparent” (2015) and “Mozart in the Jungle” (2016); HBO’s “Girls” (2013); and Netflix’s “The Kominsky Method” (2019). Among dramas, HFPA voters have gone for such straight-out-of-the-box freshman choices as HBO’s “Boardwalk Empire” (2011), Showtime’s “The Affair” (2015) and USA Network’s “Mr. Robot” (2016).

Where does this leave us in advance of the Globes, coming up in roughly 10 weeks? It’s hard to say, other than the fact that an “Abbott Elementary” comedy triumph would be the first broadcast network win in the category at the Globes in nine years. Working in its favor, however, is the fact that the last 10 winning shows for Best Comedy came out on top in their first nominations. Even so, a “Hacks” repeat of its victory earlier this year is also very much on the radar. Neither will have to worry about the Apple TV+ entry “Ted Lasso,” which failed to qualify during the HFPA’s eligibility window. It’s won the Emmy for Best Comedy Series two years running.

Drama series stands to be an even more competitive category this time around, with “The Crown” potentially locking horns with “Severance” and “Better Call Saul” while looking to be just the sixth show in Golden Globes history to win at least three series trophies. (The others are “The X-Files,” “Mad Men,” “All in the Family” (which holds the record with four), “The Golden Girls” and “Sex and the City.”)

The Golden Globes ceremony airs on NBC and streams on Peacock on Tuesday, January 10.