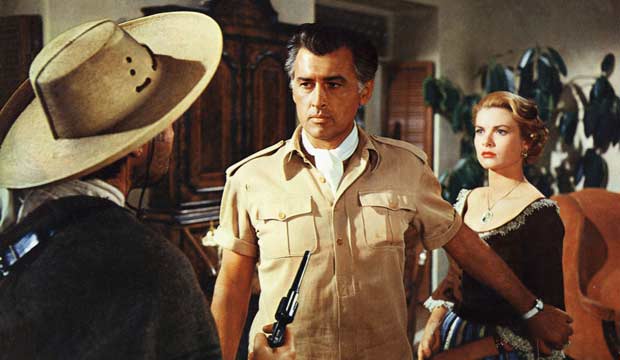 Grace Kelly would’ve celebrated her 89th birthday on November 12, 2018. The Oscar-winning actress made just a handful of movies before transforming from a Hollywood princess into a real life one following her marriage to Prince Rainier of Monaco in 1956. In honor of her birthday, let’s take a look back in the photo gallery above of all 11 of her films, ranked worst to best.

Kelly got her start performing onstage and in television before being drafted by Hollywood to appear in Henry Hathaway‘s ripped-from-the-headlines nail-biter “Fourteen Hours” (1951) when she was just 22-years-old. The next year found her starring as the concerned wife to an imperiled town marshal (Gary Cooper) in the landmark western “High Noon” (1952).

11. GREEN FIRE (1954)
“Green Fire” is B-movie malarky with an A-movie sheen, a big-budget, Cinemascope romp that’s as shallow as a birdbath. Stewart Granger plays an emerald prospector searching for treasures while romancing a coffee plantation owner (Kelly) and fighting off bandits. What should be an entertaining-enough romp buckles under the weight of its massive production.

10. THE SWAN (1956)
The role of Princess Alexandra in this third remake of Ferenc Molnar’s classic play was one of the last Kelly would portray before becoming a real life royal herself. The story of a young princess encouraged to marry the crown prince (Alec Guinness) so that her family can regain the throne is handsomely produced, but rather staid and unadventurous.

9. FOURTEEN HOURS (1951)
Kelly made her big screen debut with a bit part in this nail-biter from Henry Hathaway. Richard Basehart stars as a mentally-disturbed man threatening to jump from the 15th floor of a hotel. He spends 14 hours atop the ledge as a police officer (Paul Douglas) tries to talk him down. Kelly co-stars as a one of the observers from the ground, woman about to sign divorce papers who decides to reconcile with her husband after witnessing the near-tragedy.

8. HIGH SOCIETY (1956)
“High Society” was the last film Kelly made before becoming Princess consort of Monaco, and it’s perhaps as fitting a swan song as fans could hope for. This glossy, Technicolor remake of “The Philadelphia Story” can’t match the sparkle and wit of the original, but it’s an entertaining enough adaptation of Philip Barry’s play. Kelly plays a spoiled socialite who must choose between the romantic advances of her ex-husband (Bing Crosby), her new fiancé (John Lund), and a reporter (Frank Sinatra).

7. THE BRIDGES AT TOKO-RI (1954)
This ambitious, moving adaptation of James Michener’s novel stars William Holden as a lawyer recalled by the Navy to fly fighter jets during the Korean War. He must grapple with his own ambivalence towards the ongoing conflict while strategically bombing heavily defended enemy bridges. Kelly brings a lot of grit and determination to what could’ve been the rather thankless role of Holden’s wife.

6. DIAL ‘M’ FOR MURDER (1954)
The first of three films Kelly made with the master of suspense was this adaptation of Frederick Knott’s Broadway hit. Ray Milland plays a successful tennis player who frames his unfaithful wife (Kelly) for first-degree murder after she thwarts his own attempt to have her killed. Hitchcock keeps the action decidedly stage-bound with one notable exception: the use of 3D.

5. MOGAMBO (1953)
Kelly reaped her first Oscar nomination for this remake of the 1932 adventure yarn “Red Dust.” Clark Gable repeats his role from the original as a raffish safari hunter who starts an affair with a socialite (Best Actress nominee Ava Gardner) and an anthropologist’s unfaithful wife (Kelly). Though Kelly won the Golden Globe for Best Supporting Actress, she lost at the Academy Awards to Donna Reed (“From Here to Eternity”).

4. TO CATCH A THIEF (1954)
“To Catch a Thief” is one of Hitchcock’s most stylish efforts, the kind of movie where you can almost drink the scenery. Cary Grant plays a retired cat burglar who must clear his reformed name by catching an imposter ripping off wealthy tourists in the French Riviera. Kelly co-stars as his cool-as-a-cucumber love interest, who looks stunning with the help of Edith Head’s Oscar-nominated costumes.

3. HIGH NOON (1952)
The clock is ticking for Will Kane (Best Actor winner Gary Cooper), a retired marshal who must face down a posse of gunmen arriving on the noon train despite the protestations of his newlywed Quaker wife (Kelly). Though he seeks the help of the townspeople, he soon realizes he’s on his own. Director Fred Zinnemann and screenwriter Carl Forman keep the tension tight, with the action apparently unfolding in real time (as evidenced by the many clocks referenced throughout).

2. THE COUNTRY GIRL (1954)
Kelly won the Oscar as Best Actress for this adaptation of Clifford Odets’ melodramatic stage hit. She plays the wife of an alcoholic Broadway has-been (Bing Crosby) plotting a comeback with the help of an ambitious young director (William Holden). At first, Holden thinks Kelly is the cause of all her husband’s woes, but he soon grows to love her himself.

1. REAR WINDOW (1954)
Throughout his career, Hitchcock proved a master not just of suspense but of making good use of confined spaces. In “Rear Window,” he creates an entire world inside one apartment complex, as seen through the window of a photographer (James Stewart) confined to a wheelchair who passes his time spying on his neighbors. When he becomes convinced that one of them (Raymond Burr) murdered his wife, he enlists his devoted girlfriend (Kelly) and sarcastic housekeeper (Thelma Ritter) to uncover the truth.