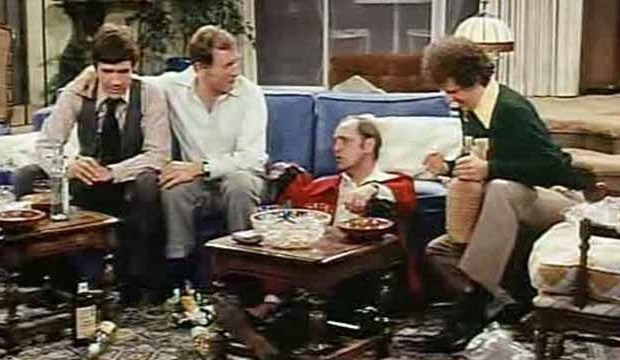 The best kind of Thanksgiving leftovers are the ones from the past five decades of television. Our favorite TV shows have provided the sort of memories that last long beyond the turkey and stuffing that will be gone by the weekend after. Take a photo gallery tour above with the greatest Thanksgiving episodes in TV history. Click through and enjoy reliving the following special holiday programs.

1. The Bob Newhart Show; “Over the River and Through the Woods” (1975)
Bob Hartley (Bob Newhart) and friends Jerry (Peter Bonerz), Howard (Bill Daily), and Mr. Carlin (Jack Riley) get completely drunk while spending the holiday at Bob’s apartment. His wife Emily (Suzanne Pleshette) is back at home visiting her family. You’ve got to see how the boys order Chinese food for Thanksgiving.

3. Cheers; “Thanksgiving Orphans (1986)
Everyone spends Thanksgiving at Carla’s (Rhea Perlman) house, including Diane (Shelley Long) dressed as a pilgrim woman. It all ends up with a big food fight with the rest of the ensemble (Ted Danson, Woody Harrelson, John Ratzenberger, George Wendt) by the end of dinner.

4. The West Wing; “The Indians in the Lobby” (2001)
Two Indians formally protest in the White House lobby to C.J. (Allison Janney) about health care rights. On a lighter note, the highlight is when President Bartlet (Martin Sheen) has an extended and funny conversation on the Butterball hotline.

6. Bewitched; “Samantha’s Thankgiving to Remember” (1967)
There’s nothing more authentic than an original Thanksgiving with actual Pilgrims and Indians. Ironically, Darren (Dick York) is the one put on trial for being a witch and not Samantha (Elizabeth Montgomery) when they are transported back to the original Thanksgiving in the 17th century.

7. Friends; “The One with Chandler in a Box” (1997)
Even though there are many great Thanksgiving episodes for this series. My favorite is the one where Joey (Matt LeBlanc) is so mad with Chandler (Matthew Perry) that he sentences him to several hours in a big wooden box while the other friends (Jennifer Aniston, Courteney Cox, Lisa Kudrow, David Schwimmer) celebrate the holiday.

8. The Simpsons; “Bart vs. Thanksgiving” (1990)
In one of the earliest episodes of the long-running animated program, Bart (Lisa Cartwright) is blamed for ruining Thanksgiving. He runs away and discovers some homeless men at a soup kitchen. When he returns home, he consoles a sobbing Lisa (Yeardley Smith) on the roof.

9. Saturday Night Live”; Paul Simon/George Harrison” (1976)
Music legend Paul Simon, who hosted the second-ever episode of “SNL” in October of 1975, returned the following fall as emcee again. The highlight of that episode was his rendition of “Still Crazy After All These Years” dressed as a turkey during the opening monologue. All this and George Harrison as a special musical guest!

10. Northern Exposure; “Thanksgiving” (1992)
The Indian “Day of the Dead” tradition of throwing tomatoes at white people especially gets under the skin of Joel (Rob Morrow). The premise of the show has this newly-graduated doctor indebted to a small Alaskan community to pay his medical school bills. The finale with the whole town enjoying the big meal is particularly touching.

11. Seinfeld; “The Mom and Pop Store” (1994)
Elaine (Julia Louis-Dreyfus) wants to help her boss win a ticket so he can help hold the Woody Woodpecker balloon in the Macy’s Thanksgiving parade (to disastrous effect). George (Jason Alexander) might buy a car previously owned by Jon Voight. Jerry (Jerry Seinfeld) and Kramer (Michael Richards) visit a “Mom and Pop” local store.

12. The Brady Bunch; “The Un-Underground Movie” (1970)
Not really a Thanksgiving episode, but hey, the entire family and Alice (Ann B. Davis) are dressed in Pilgrim costumes. That’s the case because Greg (Barry Williams) is shooting a short documentary in their backyard for a school project.

13. The West Wing; “Shibboleth” (2000)
While Toby (Richard Schiff), Josh (Bradley Whitford), and Sam (Rob Lowe) make holiday plans to watch football, Charlie (Dule Hill) is sent on a mission to find the perfect knife for the President (Martin Sheen). All of that makes for a good episode, but you must see C.J. (Allison Janney) as she is forced to decide between two turkeys: which one will get the pardon and which one will be destined for someone’s dinner.

14. The Big Bang Theory; “The Thanksgiving Decoupling” (2013)
Sheldon (Jim Parsons) ends up surprisingly bonding with Howard’s (Simon Helberg) father-in-law over beer and football. The rest of the ensemble bond over cooking with secrets of their own.

15. How I Met Your Mother; “Slapsgiving” (2007)
The gang celebrates their first Thanksgiving with Marshall (Jason Segel) and Lily (Alyson Hannigan) as a married couple. In a long-running tradition, Marshall gets to slap Barney (Neil Patrick Harris) before their game countdown runs out.