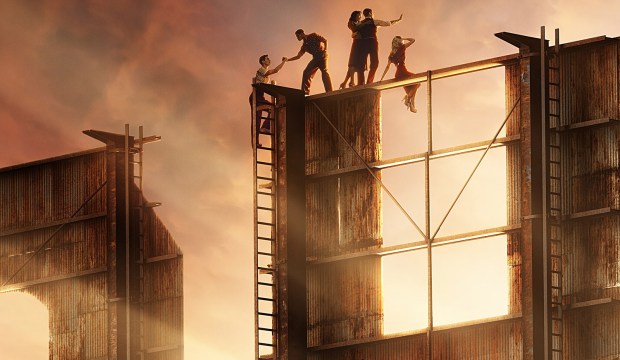 The Netflix limited series “Hollywood” premiered on May 1. Created by Ryan Murphy and Ian Brennan (“Glee,” “The Politician”), the seven-episode drama imagines the golden age of show business if the era really had been golden for the marginalized groups who were ignored or oppressed by society at large. Now the silver screen fable could have a happy ending at the Emmys. Scroll down for our exclusive video interviews with top Emmy contenders from the show.

David Corenswet stars as an up-and-coming actor trying to become a movie star, but he’s not the only one striving for recognition. So are a gay Black screenwriter (Jeremy Pope), a half-Filipino director (Darren Criss), a Black actress (Laura Harrier) and closeted actor Rock Hudson (Jake Picking), who in real life hid his sexuality from the public throughout his career. How might the world have changed if only the industry’s mostly straight, white, male gatekeepers had allowed them to be who they were and make the groundbreaking films they wanted to make?

Murphy programs have had a great Emmy track record up to this point. He has won six Emmys himself including Best TV Movie for “The Normal Heart” (2014) and Best Limited Series for “The People v. O.J. Simpson” (2016) and “The Assassination of Gianni Versace” (2018). And many more of his shows have earned nominations and wins across many categories, including “American Horror Story,” “Feud: Bette and Joan” and “Pose.” That track record by itself makes “Hollywood” an automatic threat for awards. And the heart-on-his-sleeve way he tries to right the wrongs of the past give it a strong rooting factor, especially for many of the industry insiders who vote for the Emmys.

And the awards resumes of many of the talent involved are just as impressive, including Tony winners Joe Mantello and Patti LuPone, Tony nominee Pope, Emmy nominee Dylan McDermott, Emmy winners Holland Taylor and Jim Parsons and Oscar champ Mira Sorvino. Follow the links below to see what some of the show’s creative team has to say.