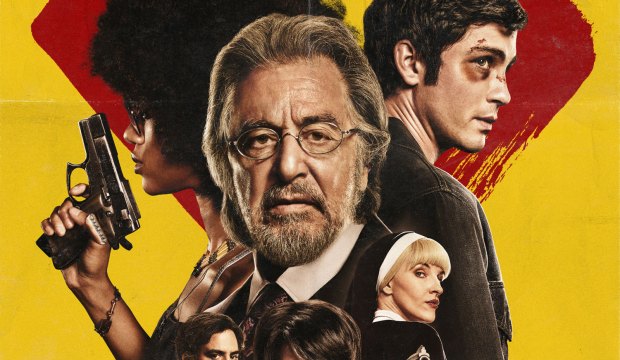 The revenge thriller “Hunters” premiered its 10-episode first season on Amazon Prime Video on February 21, 2020. It was created by David Weil and executive produced by Oscar winner Jordan Peele (“Get Out,” “Us”), and it’s the first regular TV series role for Oscar winner Al Pacino. Now they could be contenders for Emmys. Scroll down for our exclusive video interviews with top awards contenders from the show.

“Hunters” is set in 1970s New York and stars Pacino as Meyer Offerman, a Holocaust survivor who has become a wealthy man and devotes his time, energy and resources to searching for fugitive Nazis living in the United States and killing them. He’s aided by a rag-tag group including a washed-up actor (Josh Radnor), a Vietnam War veteran (Louis Ozawa) and a former MI6 agent (Kate Mulvany), as well as a young math whiz (Logan Lerman) who joins the team while trying to get to the bottom of his grandmother’s murder.

Though Weil is a newcomer with no previous awards track record for his TV writing, Peele is certainly familiar to awards voters. Even before he won his Oscar for penning the horror film “Get Out,” he was an Emmy mainstay for his work on the sketch comedy series “Key and Peele,” for which he won Best Variety Sketch Program in 2016. And though Pacino has never had a regular series role before, he does have two Emmys for longform programs: Best Movie/Limited Actor in 2004 for the miniseries “Angels in America” and in 2010 for the telefilm “You Don’t Know Jack.”

So could this drama be as popular with the TV academy as Amazon’s breakthrough comedy “The Marvelous Mrs. Maisel” has been? Follow the links below to see what some of the show’s creative team has to say.