Is “Grey’s Anatomy” on tonight (February 2, 2023)? NO. Instead, ABC is broadcasting the finale of “Celebrity Jeopardy” on Thursday night with Will Wheaton, Patton Oswalt and Ike Barinholtz. TV’s longest-running medical drama is currently in the midst of a three-month hiatus and will return on February 23 for an hour titled “I’ll Follow the Sun.” That episode will feature a tearful goodbye to lead actress Ellen Pompeo, who is leaving the program after 19 years — though she’s expected to return for the finale. Watch the Season 19, Episode 7 video trailer above and read on for everything to know about “Grey’s Anatomy.”

Who are the original cast members?

“Grey’s Anatomy” centers around the personal and professional lives of the interns, residents and attendings at Grey Sloan Memorial Hospital. The series has seen its fair share of cast overall over the past two decades, but there are still three originals among the current line-up: Ellen Pompeo as Meredith Grey, Chandra Wilson as Miranda Bailey and James Pickens Jr. as Richard Webber.

Who are the other characters?

As for some of the other long-serving stars, Kevin McKidd as Owen Hunt joined in Season 5, Kim Raver as Teddy Altman joined in Season 6 (her tenure has been off and on), Camilla Luddington as Jo Wilson joined in Season 10, and Caterina Scorsone as Amelia Shepherd and Kelly McCreary as Maggie Pierce both joined in Season 11. More recent full-time hires include Jake Borelli as Levi Schmitt, Chris Carmack as Atticus Lincoln, Richard Flood as Cormac Hayes and Anthony Hill as Winston Ndugu.

What is the current season about?

This year, the show focuses on five new interns played by Alexis Floyd, Niko Terho, Midori Francis, Adelaide Kane and Harry Shum Jr. who are all trying to make their way in the medical field. In addition, Meredith continues to flirt with Scott Speedman‘s Nick Marsh, and Kate Walsh‘s Addison Montgomery will return to the hospital for more storylines.

Who has died on “Grey’s Anatomy”?

Through the years, “Grey’s Anatomy” fans have watched in shock and awe as some of their favorite characters were killed off, often under violent circumstances. T. R. Knight‘s George O’Malley was hit by a bus, Eric Dane‘s Mark Sloan and Chyler Leigh‘s Lexie Grey were both in a plane crash, Patrick Dempsey‘s Derek Shepherd was in a car crash, and Giacomo Gianniotti‘s Andrew DeLuca was stabbed.

How many spin-offs are there?

Due to its extreme success, “Grey’s Anatomy” has spawned two spin-off series: “Private Practice” (2007-2013) and “Station 19” (2018-Present). The flagship show has engaged in multiple crossover stories with both spin-offs through the years.

Who is the showrunner?

Creator and original showrunner Shonda Rhimes handed off the reigns to Krista Vernoff in 2015. Vernoff will continue to serve as the “Grey’s Anatomy” boss until the end of Season 19. “It has been the privilege of a lifetime to be entrusted to run Grey’s Anatomy for the past six years and Station 19 for the last four,” Vernoff told our sister site Deadline. “The passion of the dedicated fandoms and the impact that these shows have on hearts and minds cannot be overstated. The amount of talent in these two extraordinary casts and these two brilliant writers rooms is beyond measure — and these crews work magic week after week.”

How many Emmys has “Grey’s Anatomy” received? 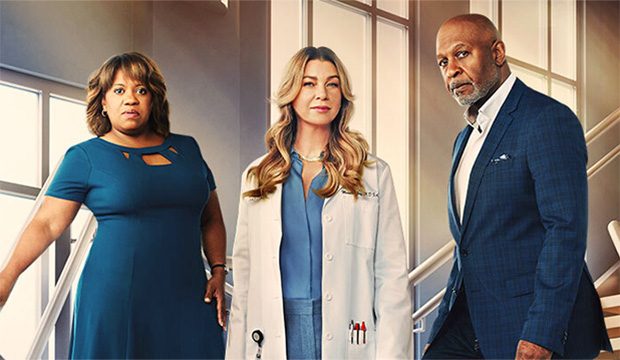