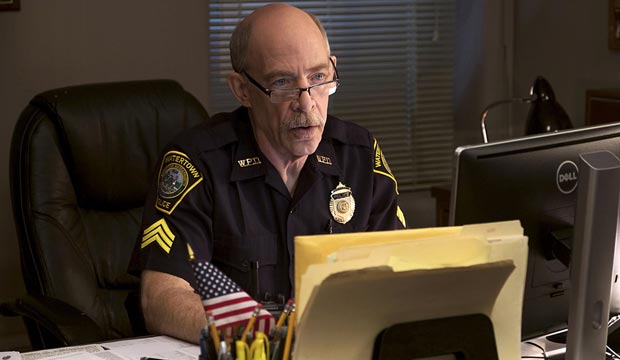 Happy 64th birthday to Jonathan Kimble Simmons, aka J.K. Simmons! The Academy Award-winning actor first came to fame as a song-and-dance man on Broadway, then segued to a celebrated career in television and finally began an illustrious film career that has endured for 25 years.

Simmons was a long-time theater actor — he had a memorable turn on the 1992 Tony broadcast in a striped purple suit raising his jazz hands in a number from “Guys and Dolls” — until he made his way to television and stunned audiences as white supremacist inmate Vern Schillinger in the HBO series “Oz.” Hollywood then came calling, making a big splash in the “Spider-Man” films and capping it off by winning the Oscar, the Golden Globe and the Screen Actors Guild Award for his chilling performance as a music teacher in “Whiplash.”

SEEJ.K. Simmons (‘Counterpart’): Emmy voters love to honor two performances for the price of one

Though busy filming his Starz series “Counterpoint,” Simmons will return to the screen next summer with Chadwick Boseman in “17 Bridges.” Till then, let’s raise a glass of the bubbly to Simmons by counting down his 10 greatest film performances. Our list includes the movies mentioned above, plus “Juno,” “Up in the Air,” “The Front Runner” and “Thank You For Smoking.”