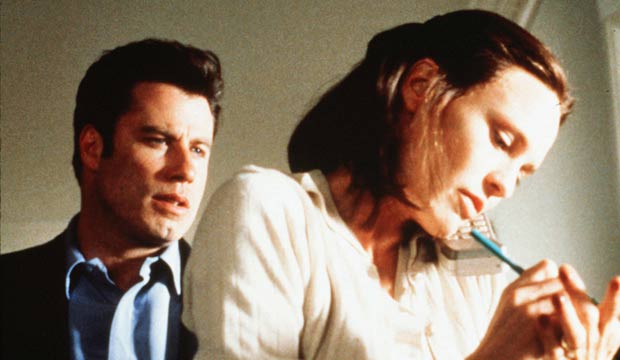 John Travolta will celebrate his 65th birthday on February 18, 2019. The actor has had a long and varied career, though it has often been marked by extremely high highs and extremely low lows.

Travolta started his career in the musical theater on Broadway with appearances in two shows. He first appeared in the original production of “Grease” in the supporting role of “Doody.” (He would later go on to star in the lead role of Danny Zuko when the film version was made.) His second Broadway appearance would be in a show called “Over Here,” which starred the Andrews Sisters and featured Travolta alongside other newcomers Marilu Henner and Treat Williams.

Travolta than moved to Los Angeles and found work in guest appearances on television. He made his film debut in a low budget horror film called “The Devil’s Rain,” which starred such veteran actors as Eddie Albert, Ernest Borgnine, and Ida Lupino.

Stardom came to Travolta when he won the role of Vinny Barbarino on the hit sitcom “Welcome Back, Kotter.” He would gain a small part in the horror film “Carrie” during the show’s first season, but it would be his role in “Saturday Night Fever” that would launch his film career and earn him his first Best Actor Oscar nomination at the age of 24. He remains the fifth youngest person to ever by nominated in that category.

In the next few years Travolta’s career would be one of extremes. He had tremendous hits with “Grease” and “Urban Cowboy” but also a huge disaster in the film “Moment by Moment” which paired him with Lily Tomlin in an older woman/younger man romance.

In the mid-1980s he tried to recapture some of his early status with a sequel to “Saturday Night Fever” called “Staying Alive” and another film called “Two of a Kind” which re-teamed him with his “Grease” co-star Olivia Newton-John. Both films were poorly received and it would be a long time before Travolta got his career back on track with his role in “Pulp Fiction” for Quentin Tarantino which earned him his second Best Actor Oscar nomination.

To celebrate Travolta’s birthday, tour our photo gallery above of his 15 best greatest performances, ranked worst to best.