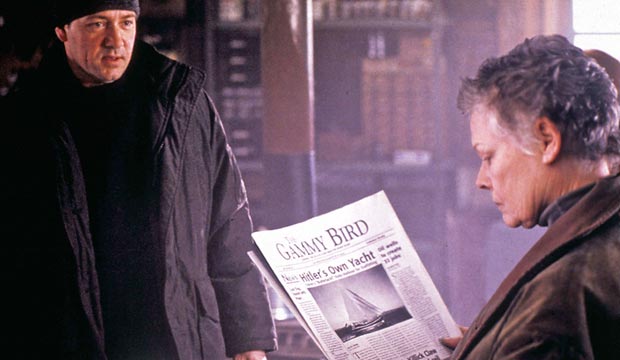 In this fall’s delightful documentary, “Tea With the Dames,” Dame Judi Dench, who celebrates her 84th birthday on December 9, 2018, recalls being asked to play Cleopatra in London’s National Theatre production of Shakespeare’s “Antony and Cleopatra.” Her response: “Are you sure you want a menopausal dwarf to play this part?”

Well, this menopausal dwarf has done pretty well for herself in an acting career that has lasted over half a century. For her film acting alone, Dench has been nominated for seven Academy Awards, winning one for her supporting performance in 1998’s “Shakespeare in Love.”  She also earned nine Golden Globe noms for her film work (including a win for 1997’s “Mrs. Brown”) and three for her TV work, including a win for 2000’s “The Last of the Blonde Bombshells.” She has also received 13 nominations for the Screen Actors Guild Award, winning twice (for “Shakespeare in Love” and 2000’s “Chocolat”).  And if that wasn’t enough, she won a 1999 Tony Award for her performance in “Amy’s View.”

At 84, Dench isn’t even close to hanging up her acting career. In two weeks, she will again grace the nation’s movie screens, this time as Anne Hathaway, wife of William Shakespeare (Kenneth Branagh) in Branagh’s film of “All is Lost.” And in 2019, she will reunite with Branagh for Disney’s “Artemus Fowl” and will prowl around the soundstage as Old Deuteronomy in Tom Hooper‘s film of the long-running musical “Cats.”

SEEKenneth Branagh Interview: ‘Dunkirk’ and ‘Murder on the Orient Express’

Before she starts prowling, happy happy 84th birthday to Dame Judi! To celebrate her big day, let’s take a photo gallery tour of her 12 greatest films, ranked from worst to best. It includes the movies mentioned above, plus “Notes on a Scandal,” “Philomena,” “Iris” and more.