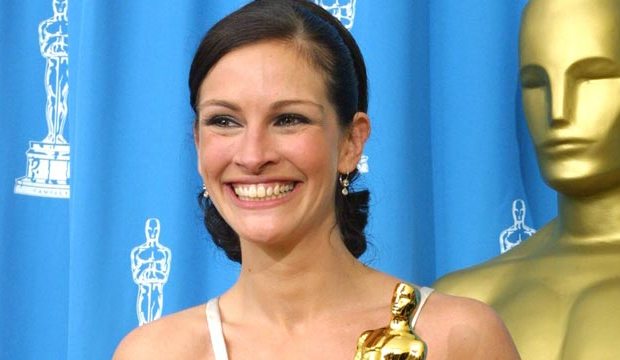 For the past three decades, Roberts has been the most iconic American movie actress around the world. That face! That smile! That laugh! In the late 1980s and 1990s, Roberts made hit after hit (“Steel Magnolias,” “Pretty Woman,” “My Best Friend’s Wedding,” “Erin Brockovich”) among them, earning her a mantel of industry awards. She has been nominated for four Oscars, with a win for 2000’s “Erin Brockovich”; nominated for eight Golden Globes with three wins (“Steel Magnolias,” “Pretty Woman,” “Brockovich”) and three Screen Actors Guild Awards, winning for “Brockovich.”

Although her output slowed a bit in the mid-2000s so that she could care for her twins, when she did return to work, she broadened her horizons a bit with turns on Broadway (2006’s “Three Days of Rain”) and television (her Emmy-nominated performance in “The Normal Heart”). After her Oscar-nominated turn in “August: Osage County,” Roberts slowed down her film career, often appearing in only one major film a year. This decision was also partly to accommodate filming her first TV series, “Homecoming,” seen on Amazon Prime.

So, in honor of her big day, let’s take a moment to raise a glass and wish her a happy birthday. Tour our photo gallery above ranking her 15 greatest movie performances from worst to best. In addition to the titles listed above, our gallery also includes “Notting Hill,” “Mystic Pizza,” “Stepmom” and “Ben Is Back.”