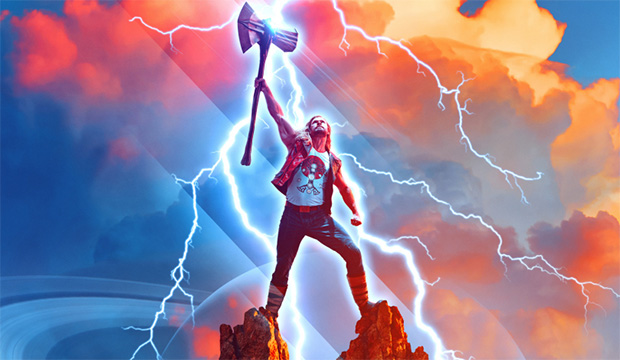 This Friday is July 1, which means we’re officially halfway through the summer box office with two months to go — although one of those months is August, which can be rather hit or miss for late summer hits. July still offers a lot of potential as we get three new animated movies, an anticipated Marvel sequel, and the latest genre movie from Jordan Peele. Read on for Gold Derby’s July 2022 box office preview.

Chris Hemsworth returns as Marvel’s Asgardian God of Thunder, and you know who else is back? Oscar winner Natalie Portman, who played Dr. Jane Foster in the first two “Thor” movies and then quickly disappeared from 2017’s “Thor Ragnarok.” Directed by Taika Waititi, this time around Jane gets to handle Thor’s hammer, Mjolnir, and become Thor herself.

A few years after his own Oscar win (for writing “Jojo Rabbit”), Waititi has created another MCU epic, this one featuring Oscar winner Christian Bale as “Gorr the God Butcher,” a relatively recent villain from the comics. I’ll be writing a lot more about this next week, but the most important thing to consider is the $122.7 million opening weekend for “Ragnarok” that led to $315 million domestic and $850.5 million worldwide. That was pre-”Avengers: Infinity War” and “Endgame” in 2018 and 2019, respectively, and also before the three previous Thor movies were available to watch on Disney+, so it seems like a perfect storm for “Love and Thunder” to open closer to $150 million or even higher.

July kicks off this Friday with the 4th of July holiday weekend leading up to the popular BBQ holiday on Monday, and Universal is using it to continue their own popular animated franchise, which has racked up $3.7 billion worldwide. “Minion: The Rise of Gru” is a prequel to the “Despicable Me” movies as well as a sequel to 2015’s “Minions,” which scored the biggest opening with $115.7 million. That was seven years ago now, while “Despicable Me 3” opened this weekend in 2017 with $40 million less, and that now has five years since its release. Look for my weekend preview soon for more on what should be a strong box office release.

Another franchise  (of sorts) Universal will want to keep going is its relationship with Oscar winner Jordan Peele and his distinctive mix of genre with social issues, which has led to two bonafide blockbuster hits. Not only did 2017’s “Get Out” win Peele his Oscar, but it also made $176 million domestic after a $33 million opening, while “Us” two years later had a huge $71 million opening but made about that same amount. “Nope” has been kept in secrecy for a few years, but we now know that it involves UFOs and stars Daniel Kaaluya, Keke Palmer and Steven Yeun. Between Peele’s devout younger fanbase and the sci-fi premise, “Nope” could be good for an opening close to $60 million, benefitting from IMAX screens in particular.

The month of July ends with the third major animated movie of the month. While, in many cases, that might hurts its chances, “DC League of Super-Pets” features Dwayne Johnson, Kevin Hart, Natasha Lyonne, John Krasinski and more all voicing DC superheroes … and their pets. One shouldn’t underestimate how combining beloved superheroes with adorable animals could bring in droves of kids and family audiences, although Warner Bros’ “Teen Titans Go! To the Movies” opened with a disappointing $10.4 million this same weekend in 2018. “Super-pets” definitely has more potential of opening closure to $30 million or maybe even more.

A bit of a summer anomaly, this adaptation of Delia Owens’ 2018 novel, which has sold over 12 million copies, stars Daisy Edgar-Jones (“Normal People”) as Kya, a young woman living in the marshes of the Deep South who is accused of a murder. It may seem like an odd release date, but the adaptation of John Green’s “The Fault in our Stars” opened in June 2014 with $48 million. An adaptation of Green’s “Paper Towns” opened the next July with just $12.6 million, which seems more on par with “Crawdads,” although I would probably push it closer to opening with $15 million or more based on fans of the book.

This animated family comedy from Paramount’s Nickelodeon branch has a great voice cast that includes Samuel L. Jackson, Michelle Yeoh, Gabriel Iglesias, Ricky Gervais and Mel Brooks. It seems to be in the vein of the “Kung Fu Panda” movies yet not quite as appealing, and it’s hard not to think of DreamWorks Animation’s “The Bad Guys” a few months back. That animated movie opened with $24 million, but it benefitted greatly from there not being many family movies in theater. “Paws of Fury” doesn’t have that luck, and I’ll be surprised if it opens with more than $15 million.

BJ Novak from “The Office” writes, directs and stars in this dark comedy about a New York podcaster who is brought to Texas for the funeral of a passing acquaintance who may (or may not) have been murdered. So he makes a podcast about her death. The movie just played the Tribeca Festival to decent reviews, but it’s the type of smaller indie (it’s actually produced by Blumhouse) that may have trouble finding a theatrical audience, especially in the middle of higher profile releases.

Also of note is that A24’s “Marcel the Shell with Shoes On,” released this past weekend, will be expanding nationwide on July 15.

This doc from Daniel Geller and Dayna Goldfine not only looks at the legendary folk singer and songwriter, but it takes a very focused look at Cohen’s frequently covered song in the title, and what it means to those who have performed it.

In this adaptation of Suzanne Allain’s novel, Sope Dirisu plays the wealthy title character, whom two best friends, played by Freida Pinto and Zawe Ashton, try to get revenge for his limiting list of what he’s looking for in a wife. It’s very much a movie looking to appeal to Jane Austen fans.

Filmmaker John Michael McDonagh (“Calvary”) returns with this Mideast-set thriller starring Ralph Fiennes and Jessica Chastain as a couple attending a lavish party in Morocco (thrown by Matt Smith) who accidentally hit a local boy with their car and need to face.

Sara Dosa’s doc about volcanologists Katia and Maurice Krafft, who spent decades exploring active volcanoes across the globe only to be killed during one such investigation. They previously appeared in Werner Herzog’s “Into the Inferno,” but Dosa’s film assembles never-seen long-lost footage the couple filmed during their travels.

This drama from Claire Dennis played the festival circuit earlier this year as “Fire,” but it stars Juliette Binoche and Vincent Lindon (“Titane”) as a couple whose relationship is thrown into disarray by the return of her former lover and his former best friend.

Lesley Manville (“Phantom Thread”) stars in this adaptation of Paul Gallico’s novel about a cleaning lady in ‘50s London who falls in love with a couture Dior dress and decides to make it her own. Directed by Anthony Fabian, the film also stars Jason Isaacs.

Thought to be one of Netflix’s most expensive movies to date, this new film from the Russo Brothers (“Avengers: Endgame”) stars Chris Evans, Ryan Gosling and Ana de Armas. Based on the novel by Mark Greaney, it’s about a cat-and-mouse game between a CIA operative with a secret identity (Gosling as the title character, Court Gentry) who has a bounty put on his head by a deranged former colleague (played by Evans).

Andrew Semans’ thriller, which premiered at Sundance in January, stars Rebecca Hall and Tim Roth. Hall plays Margaret, a woman whose ability to stay strong in the face of adversity is thrown into disarray by the return of her ex, played by Roth, and the secrets he carries.

Another Sundance debut, Max Walker-Silverman’s drama stars the great Dale Dickey as a woman waiting for an ex to show up for a meeting and unaware of his intentions.

That’s everything to look forward to in July, but look for our weekend preview with more on “Minions: The Rise of Gru.”