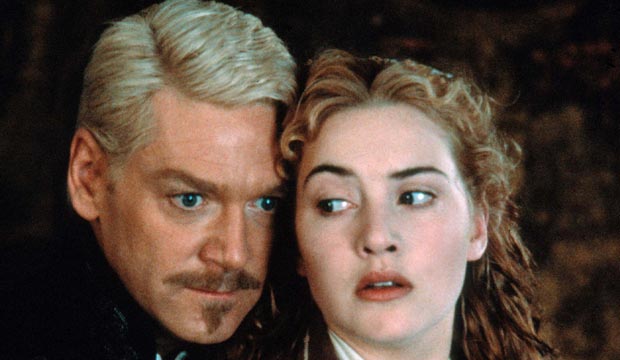 Kate Winslet represents the third generation of actors in her family. Her grandparents ran a repertory theater in England and her father struggled for many years as an actor himself while working other jobs to support his family. Winslet however found incredible success quite early in her career and by the time she turned 30, she had already received four Oscar nominations and played the female lead in the biggest box office blockbuster Hollywood had ever seen, “Titanic.”

While success in films came easy for Winslet, the one thing that did seem to elude her for a long time was recognition from the Academy. She would have to wait through five Oscar losses before the award would finally come her away for the 2008 movie “The Reader.” She would lampoon her Oscar troubles (and ironically receive an Emmy nomination) on an episode of the Ricky Gervais comedy “Extras.” On that show Winslet played a satirical version of herself who is so desperate to win an Oscar that she has taken a role in a film about the Holocaust because her agent has told her holocaust films always win Oscars. To add to the irony of it all the film she eventually did win an Oscar for, “The Reader,” was a Holocaust film.

Further complicating her Oscar history “The Reader” was not the film for which she wanted to win that year. Winslet had reunited with Leonardo DiCaprio on “Revolutionary Road,” directed by her then husband Sam Mendes, and it was that film for which she campaigned as Best Actress.

Winslet would go on to awards success on television with a remake of “Mildred Pierce” which earned her the Emmy, SAG Award and Golden Globe. She also has a Grammy, so she is just a Tony Award shy of EGOT status.

In honor of Winslet’s 42 birthday on October 5, 2018, Gold Derby invites you to take a photo gallery tour of her 15 greatest films, ranked from worst to best. The gallery above includes such movies as “Eternal Sunshine of the Spotless Mind” and “Sense and Sensibility.”

15. HAMLET (1996)
Winslet took on the role of Hamlet’s tragic love Ophelia in this four-hour film version of the play for which Kenneth Branagh adapted, directed and played the title role. The film received four Oscar nominations including one for Best Adapted Screenplay for Branagh even though the film was advertised as the complete unedited play so his “adapting” basically consisted of him saying “let’s do the whole thing.”

14. CARNAGE (2011)
Based on the Tony winning Best Play of 2009 entitled “God of Carnage,” this film from controversial director Roman Polanski tells the story of two married couples who get together to discuss a fight their two sons had on the playground. Fireworks burst out in between the couples and they have just as much trouble getting along as their sons did.

13. ENIGMA (2001)
“Enigma” has one of the more unusual groups of people behind the making of it. It was produced by Mick Jagger and Lorne Michaels of “Saturday Night Live” and written by acclaimed intellectual British playwright Tom Stoppard. The odd group came together to tell a fictionalized version of how the scientists discovered German plans for war during WWII. The story would be told more recently and with greater historical accuracy in the Oscar winning “The Imitation Game.”

12. FINDING NEVERLAND (2004)
Winslet plays a widowed mother of four boys who meets author J.M. Barrie in a London park. His friendship with her and her four boys inspires him to write the play “Peter Pan” for which he is best remembered. The film performed surprisingly well at the 2004 Oscars and received seven nominations including Best Picture. Winslet was overlooked but she did receive a BAFTA nomination as Best Supporting Actress.

11. REVOLUTIONARY ROAD (2008)
“Revolutionary Road” reunited “Titanic” lovers DiCaprio and Winslet, only this time as an extremely unhappy couple. DiCaprio suffers through a job he dislikes while Winslet longs to leave their suburban rut and embark on an adventurous life in Paris. The movie won her a Golden Globe as Best Drama Actress. She’d be denied an Oscar for the film though when she was nominated and won an Oscar the same year for “The Reader.”

10. JUDE (1996)
Based on the tragic Thomas Hardy novel “Jude the Obscure,” this film adaptation marked Winslet’s first lead role in a film. The film tells the story of two cousins who fall in love but are each married unhappily to other people. They leave their marriages to be with each other and have children only to see their lives take a horrifically tragic turn. The final moments of the film are hauntingly sad yet Winslet and Christopher Eccleston both do excellent work, as does Rachel Griffiths in a small role.

9. QUILLS (2000)
Geoffrey Rush plays the Marquis de Sade in this adaptation of the play of the same name. He is held captive in an insane asylum where he tries to survive by charming the man who runs it and also a young laundress played by Winslet. Rush received a Best Actor Oscar nomination for the film. He and Winslet where both also recognized by SAG.

8. THE READER (2008)
On her sixth Oscar nomination, Winslet was finally able to take home the prize but her win remains one of the strangest in Academy history. This film features Winslet as a woman who has an affair during WWII with a young man and then is later tried for Nazi war crimes. In order to not compete with herself ,Winslet was campaigned as lead for “Revolutionary Road” and supporting for “The Reader”, even though she is clearly giving a lead performance.

7. HEAVENLY CREATURES (1994)
Winslet’s first film role was in this hypnotic story of two teenage girls whose obsessive friendship goes tragically wrong. The two girls become increasingly dependent and when they are about to be separated the two decide to murder one of the girls’ mothers since they blame her for causing their impending separation.

6. LITTLE CHILDREN (2006)
Winslet received her fifth Oscar nomination for this film detailing suburban despair. She plays an unhappily married woman who meets a stay at home dad played by Patrick Wilson. His character is somewhat passive and emasculated by his career driven wife (Jennifer Connelly). The two begin an affair and fantasize about leaving their suburban enclave together.

5. STEVE JOBS (2015)
This biopic of the computer pioneer brought Winslet her seventh Oscar nomination, this time in the supporting category. She also won her third Golden Globe for the performance. Displaying a mousy wig and glasses, Winslet plays Job’s main assistant and guiding force. Winslet brings a core decency to her character that Steve Jobs himself sort of at times lacks.

4. IRIS (2001)
For the second time in her career, Winslet would receive an Oscar nomination for the younger version of a character while another actress would receive a nomination for the older version (the other film was “Titanic”). In this case Winslet and Judi Dench were nominated for this biopic of Iris Murdoch, an acclaimed novelist. The film details her youth and later battle with Alzheimer’s Disease.

3. SENSE AND SENSIBILITY (1995)
Winslet was launched to movie stardom as Emma Thompson’s younger sister in this adaptation of the Jane Austen novel. Thompson adapted the book into the film and won an Oscar for Best Adapted Screenplay. Winslet plays Marianne a young woman who falls in love with a dashing cad and nearly drives herself to death over her grief when he does not respond to her love the way she wants. Winslet won the SAG Award for Best Supporting Actress and went on to receive her first Oscar nomination for the film.

2. TITANIC (1997)
The film version of “Titanic” seemed to be following in the fate of the ocean liner when it faced massive delays and budget problems and was moved from its schedule summer blockbuster release slot to Christmas. With all that tumult behind it, it came as quite a shock when the end product turned out to be as compelling as it was. The film would become the biggest box office hit of its time and tie the record of most Oscar wins for a single film at 11.

1. ETERNAL SUNSHINE OF THE SPOTLESS MIND (2004)
In this film, Winslet was assigned the task of playing someone so lovable that a man would literally go through with an experimental mind technique to have her erased from his memory. The pain of not being able to be with her is so intense. Winslet is goofy, offbeat, funny and just oozes likability and sweetness as the woman Jim Carrey just can’t live without. She earned a Best Actress Oscar nomination for the role.