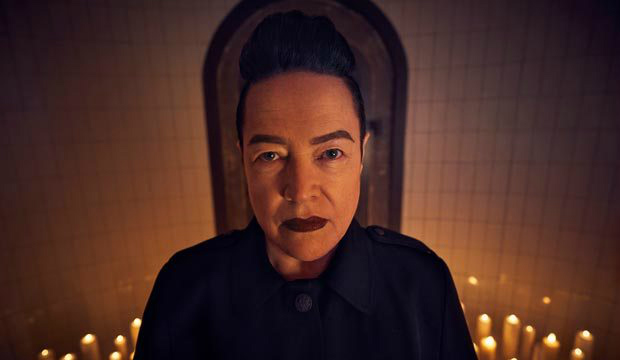 Good news, “American Horror Story” fans: Season 10 is scheduled to begin filming this month after previously being delayed due to the coronavirus pandemic. One of the cast members who’s signed on for the beach-themed new installment is Kathy Bates, who’s played six characters through the years since first joining the anthology series in Season 3. While we wait for specific details about her spooky new role, it’s the perfect time to look back on Bates’ contributions to the franchise. Below, we’ve ranked all six of her “AHS” characters from worst to best — does YOUR #1 choice match ours?

Bates is one of only three people to win Emmys for their wok on “American Horror Story,” the others being Jessica Lange (“Murder House” and “Coven”) and James Cromwell (“Asylum”). Bates prevailed for “Coven,” her debut season, in which she played Madame Delphine LaLaurie, an 1800s socialite who was known for abusing and killing her slaves. In addition, the actress took home another Emmy for “Two and a Half Men” (2012) and won an Oscar for “Misery” (1990).

6. Miriam Mead (“Apocalypse”) –In truth, Kathy Bates doesn’t have a bad character on “American Horror Story.” What makes Mead last here is there were so many standout characters in “Apocalypse” that she didn’t always stand out but she was still a fascinating, devil-worshipping human turned android with a penchant for killing.

5. Ethel Darling (“Freak Show”) — Ethel Darling, a bearded lady who performs in the freak show, is arguably the most sympathetic figure Bates has played on “AHS.” Her thick Baltimore accent made her a bit difficult to understand at times, but her struggles for acceptance made her a compelling presence compared to the evilness of other characters.

4. Iris (“Hotel”) — Iris may seem like the most unassuming character in Bates’ time on “American Horror Story,” but those low expectations made her actions in “Hotel” all the more incredible. The manager of the Hotel Cortez, Iris has a complex relationship with her son (Matt Bomer) that leads her to taking drastic action, including pushing a drug dealer out a window, almost committing suicide and ultimately seeking revenge on the Countess (Lady Gaga).

3. The Butcher (“Roanoke”) — As actress Agnes Mary Winstead playing the character of the Butcher in the documentary “My Roanoke Nightmare,” Bates was delightfully deranged. The Butcher, a.k.a. Thomasin White, was a colonial woman cast out by society who sought revenge through sacrificing humans to the witch Scáthach. You could tell Bates had a blast in the role.

2. Agnes Mary Winstead (“Roanoke”) — If the Butcher was a fun villain for Bates to play, one could only imagine how juicy it was to play Agnes Mary Winstead, an actress so obsessed with her character that she began to see herself as her. This resulted in attacking strangers on the street and later showing up on the sequel reality series, “Return to Roanoke” dressed as the Butcher and attacking the cast and crew. Truly wild stuff.

1. Madame Delphine LaLaurie (“Coven”/”Apocalypse”) — Madame Delphine LaLaurie was Bates’ introduction to “American Horror Story” and it will always be her best character. Based on the real-life New Orleans socialite who brutally abused and killed slaves, LaLaurie was cursed with eternal life by Marie Laveau (Angela Bassett) and later resurrected by Fiona (Jessica Lange). Her hissing “lies” at Fiona after being told America elected a black president will forever be iconic, as will her crying while watching “Roots” with her head detached from her body. The role justifiably won Bates a Primetime Emmy Award.