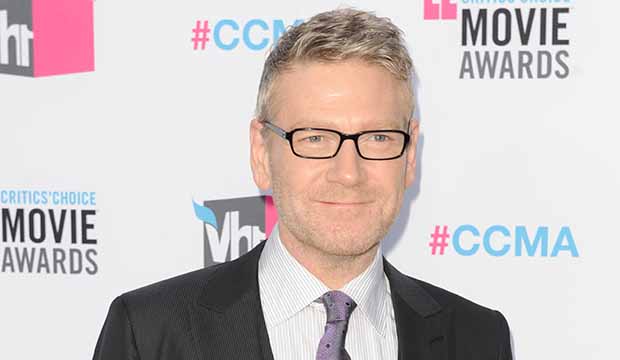 The festival itself also bestowed him with a Director Spotlight Award during the four-day event. Previously, the ‘60s-era look back at the ongoing troubles in Northern Ireland that besieged his hometown also claimed Toronto International Film Festival’s People’s Choice Award. Consider that all the nine previous winners made the cut for a Best Picture slot on the Oscar ballot..

Gold Derby chatted with Branagh at Middleburg as he talked about casting, making a movie during a pandemic and how he gently tweaked the story of his own childhood.

Q: This is quite a lovely movie as well as a true crowd-pleaser, judging from the reaction from the attendees.

A: It was a wonderful audience last night. They were quite engaged. I think we had a big enthusiasm with the screening this morning as well.

Q: Judi Dench, who plays your grandmother in “Belfast,” directed you in “Look Back in Anger,” both on TV and on stage in 1989. I never knew she tried her hand at helming.

A: She only did it a few times because she doesn’t like being on her own. She says, “I like to be in the pack.” She is a very good director but she likes to be in the group.

Q: The other thing I was impressed by was how your five Academy Award nominations are all for different categories – Best Director and Best Actor for “Henry V,” Best Live Action Short for “Swan Song,” Best Adapted Screenplay for “Hamlet” and Best Supporting Actor for “My Week With Marilyn.” When did you do a short film?

A: It ended up being nominated in the 1993 Oscars. It was a Chekov short story and it starred John Gielgud – not too bad. It was a great experience, too. He was a nice person and he was sort of Old World and he met and knew everyone. He had played the role on stage to entertain the troupes in the second World War, so he jumped at it because he really knew how to do it.

Q: Well, let’s talk about “Belfast.” How hard was it to shoot a film during a pandemic? Did you actually use a real city street for where your childhood home was?

A: No, we built it, largely because of COVID. We first went to Belfast to start with, and shot the exterior scenes there we did anything we could get a hold of. But between 85-year-old Judi Dench and 10-year-old Jude Hill (whose character is based on a young Branagh), we just had to consider what is the best COVID policy for these folks. A million studio spaces were occupied by productions that were shut down. So there were studios in Belfast we couldn’t use because things were standing by. It was just like weird aspect moment. Everyone had to test for two weeks and the whole crew had to test every day. It was a very sweaty moment each and every day. We got away with it. We shot in August during the period when there were very few infections. Then on the penultimate day, we had our first case. They were asymptomatic, thank God. Then it spread like dominos after that. We just about got it in on time. The side effects was that the cast acquired a family feeling almost immediately because they were living in a bubble.

Q: I wonder whether when actual audiences will want to go to theaters still. I’ve been watching most movies on streaming sites and also enjoying episodic TV shows as well. So many big-budget films were held back so they make a bigger profit at multiplexes. “No Time to Die” was moved back four times.

A: “Death on the Nile” (his second go at an Agatha Christie mystery, as he repeats his role as detective Hercule Poirot) has been changed three times. It’s now coming out on February 11 and I hope the similar environment continues to open up. Festivals become critical to it. At the center, if it works, it’s a common experience that feels safe. They are the spreaders of the word in the cinema.

Q: It is interesting that you made this film that has so many biographical elements from your life story. Central to making it all work is the casting the young version of yourself. I’m curious if doing that was a surreal thing to you?

A: It was going in, but not while I was doing it. I quickly became more specific about the character of Buddy. Once I started to name people in a different way, I was looking for somebody who would be the audience’s friend, who would be good company, which Jude very quickly was. He was somebody who was a good presence in the room, so he would be a good presence on the screen. I did not feel enslaved to anything. It didn’t have to be an encyclopedia of real things. Some things were, when you see this kid at the top of the street and you see this punch full length in slow motion. I never saw a proper street fight punch before when it happened. So that was very specific. He and the casting process opened it up.

Q: Jamie Dornan and Caitriona Balfe, who play Jude’s parents, are so gorgeous together, it hurt my eyes. She has that Marilyn Monroe look in this, even though she plays a mother.

A: It’s a visual beauty treatment. The funny thing is that Wakana Yoshihara , who was in charge of makeup and hair, said, “You must have glamorized your parents.” For Ma’s look, it was 15 pictures of Bridget Bardot. And for Jamie, it was 15 pictures of Marlon Brando.” They were these classic beautiful people who always seemed sort of effortlessly had that inner beauty.

Q. Are they still with us?

A: Sadly, no. They would have been appalled I was doing this, but they would have got it in the end. My brother and sister are very good allies to this project. We open the film on November 4 at the Belfast Film Festival.

Q: I don’t think Van Morrison, who also hails from Belfast, has ever written an original song for a movie before, although many of his hits have been used in countless films.

A: I believe “Down to Joy” would be his first original tune for a film soundtrack.

Q: Has there been any recent violence in the streets considering the status of Brexit?

A: There was some activity in the spring that raised concerns about street violence that emerged. Obviously, Brexit has thrown up a lot of issues. But, I think that on the ground amongst politicians, amongst social workers , amongst youth workers as well as — this is key –people on the ground who are where the flashpoints of that violence might happen and slip back.