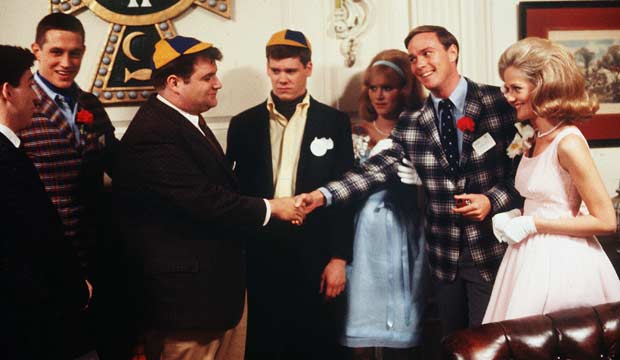 Actor Kevin Bacon celebrates his 61st birthday on July 8, 2019. He has worked steadily as an actor and appeared in so many different films that he actually spawned a trivia game called “Six Degrees of Kevin Bacon,” the purpose of which is to see if you can link Bacon to any other actor in less than six other movies.

Bacon started his career at the Circle in the Square Theater School in New York City, which then led to small roles in the immensely popular “Animal House” and in the Neil Simon film “Only When I Laugh.” He then appeared in the sleeper smash “Friday the 13th” where he was one of the early victims in the immensely popular series of films. Fame would come when he joined such other young actors as Steve Guttenberg, Daniel Stern, Ellen Barkin, Mickey Rourke, Tim Daly and Paul Reiser in the bittersweet comedy “Diner” from Barry Levinson. Two years later he would have his first starring role in the smash hit “Footloose” about a small town where dancing is forbidden. Bacon plays the rebellious outsider who tries to change this policy.

Despite his vast array of films Bacon’s only award recognition has come from his work in television. In 2009 he won the Golden Globe and was nominated for an Emmy for his performance in the TV movie “Taking Chance.” This film depicts the experience of a marine who volunteers to escort the body of a young soldier killed in battle back to his hometown. He has somehow never received an Oscar nomination yet.

Bacon has been married to fellow actor Kyra Sedgwick since 1988 and they have two children. To celebrate Bacon’s birthday, tour our photo gallery above featuring the titles already mentioned plus “JFK,” “The River Wild,” “Murder in the First,” “Mystic River,” “Apollo 13” and more. We rank his 15 greatest movie performances from worst to best.