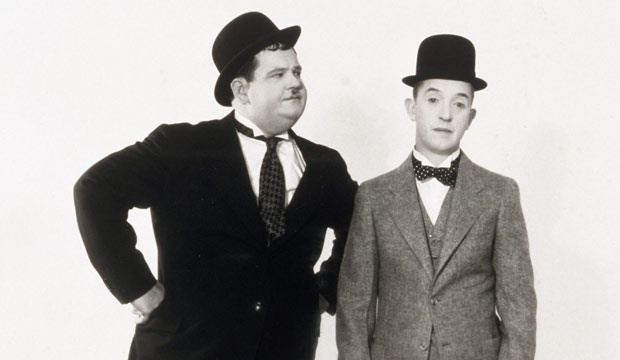 Oliver Hardy would’ve celebrated his 127th birthday on January 18, 2019. The actor became a Hollywood legend after pairing up with Stan Laurel to form the comedic duo Laurel and Hardy. Together, the pair produced 79 shorts (34 silent, 45 sound) and 27 features. Yet how many of those titles are classics? In honor of his birthday, let’s take a look back at 10 of Laurel and Hardy’s best feature films, ranked worst to best.

Laurel and Hardy were already established comedians in their own right before they teamed up for a series of shorts produced by Hal Roach (of “The Little Rascals” fame). One of their most famous, “The Music Box” (1934), won the Academy Award for Best Live Action Short (Comedy).

Their first official foray into features was a cameo appearance in “The Hollywood Revue of 1929” (1929), a musical variety meant to introduce MGM’s silent movie stars to sound. (It’s a sign of the times that this plotless hodgepodge managed to snag an Oscar nomination for Best Picture.) Just two year later, the two were headlining the full-length comedy “Pardon Us” (1931), which found Stan and Ollie behind bars for selling beer during Prohibition.

Although neither personally competed at the Academy Awards, Laurel did receive an Honorary Oscar in 1961 for his career in comedy. Sadly, Hardy died in 1957 before any such recognition could be bestowed upon him.

The two have been back in the headlines as of late thanks to the new film “Stan and Ollie” (2018), which casts John C. Reilly and Steve Coogan as the iconic pair. Reilly reaped a Golden Globe bid for his work, while Coogan was recognized at BAFTA, where the film also competes for Best British Film and Best Makeup/Hair.

Tour our photo gallery above of Laurel and Hardy’s 10 greatest films. Our list includes “Sons of the Desert,” “Way Out West” and more.