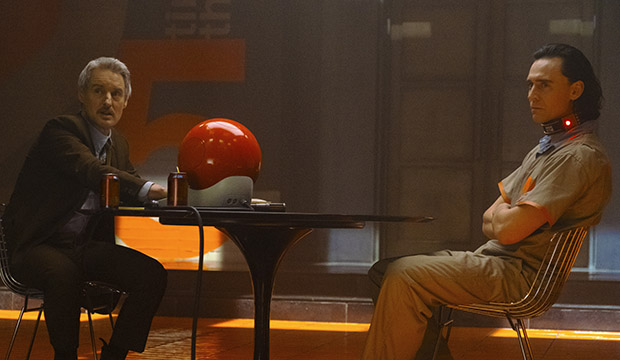 If there’s one lesson we’ve learned from the 13 years we’ve spent watching the films of the Marvel Cinematic Universe, it’s not to underestimate Tom Hiddleston’s Loki. Everyone’s favorite cunning and charismatic God of Mischief has escaped death a couple of times now in the course of his decade-long tenure in the MCU. Now he’s stepping out of his (adopted) brother’s shadow and getting his own show to further remind us why he’s one of the best characters the extended universe has ever produced.

Debuting Wednesday, June 9, “Loki” is the third original Marvel series to hit Disney+ this year after “WandaVision,” a sitcom pastiche with complex ruminations on grief, and “The Falcon and The Winter Soldier,” a timely two-hander that explored both trauma and racism through the lens of 2021. Directed by Kate Herron with Michael Waldron serving as head writer, the show follows Loki after he escaped with the Tesseract, aka the Space Stone, in 2012 during the time heist in “Avengers: Endgame” (2019). It promises to be another excellent chapter of Loki’s story, so in preparation for the show’s highly anticipated debut, we’ve gathered the seven most important things to know before you watch.

1. “Loki” is a time-traveling procedural
After dipping its toes into both sitcoms and buddy comedies, Marvel is going full “Doctor Who” for its third Disney+ series. Kidding. Sort of. “Loki” finds its leading man butting heads with Owen Wilson’s Mobius M. Mobius and other members of the bureaucratic Time Variance Authority, an organization that is dedicated to protecting the proper flow of time. While there is still a lot about the show that is shrouded in mystery — Marvel gonna Marvel, y’all — we know that across the show’s six episodes, Loki travels through time and space in order to help the TVA fix the timeline he broke when he stole the Tesseract and created a branched reality. Of course, Loki is also obsessed with chaos, while the TVA is concerned with keeping order, so this should create a rather exciting dynamic week to week.

Additionally, because of “Loki’s” nature and the fact the show is going to be traveling through time and existing in a new version of reality every week, each episode of the show is also able to take on a different look or feel. According to Waldron, the writers and producers took inspiration from various pieces of popular culture, noting during an interview with Entertainment Weekly that “Blade Runner” (1982) was one example of an aesthetic that they looked to when creating the show.

2. This isn’t the evolved Loki of “Thor: Ragnarok” (2017) and “Avengers: Infinity War” (2018)
One crucial thing to remember is that “Loki” is set after the events of “Avengers: Endgame” and that the Loki of the show is not the same person who returned to help Thor (Chris Hemsworth), Bruce Banner (Mark Ruffalo) and Valkyrie (Tessa Thompson) take on Hela (Cate Blanchett) and her forces at the end of “Ragnarok.” He’s also not the person who went toe to toe with Thanos (Josh Brolin) in an attempt to save his brother at the beginning of “Infinity War.” This is the Loki we saw in “The Avengers” (2012), which means he still believes he’s meant to rule, has just been Hulk-smashed and there’s a lot of emotional growth that has yet to happen. But that’s not necessarily a bad thing; this new direction preserves Loki’s original narrative arc without damaging it while still allowing the character, who has become a fan favorite, to continue to exist in the extended Marvel universe.

3. We’ll finally get to explore Loki outside of his relationship with Thor
Although Loki has been a mainstay of the MCU since his introduction in 2011’s “Thor,” his appearances have always been connected to or revolved around the complicated, fractured relationship he has with his brother. Even his turn as the villain of “The Avengers” was rooted in betrayal and the anger he felt toward Thor and the rest of his family. This new show finally puts Loki in the spotlight in a way he’s never been before, which means we’re going to get to explore the character in a way that isn’t necessarily tied to any of his familial relationships. It’s one of the aspects of the project that Hiddleston loved most. “One of the things [Marvel boss] Kevin Feige led on was, ‘I think we should find a way of exploring the parts of Loki that are independent of his relationship with Thor,’ or see him in a duality or in relationship with others, which I thought was very exciting,” said Hiddleston in his EW interview.

4. We’ll see a lot more of Loki’s shapeshifting
Loki possesses a number of unique abilities, including being able to create illusions and shapeshift. We’ve seen him use the former throughout his time in the MCU to conceal his true motives or hide his vulnerabilities. Meanwhile, the latter was on display when he masqueraded as his father, Odin (Anthony Hopkins), in “Ragnarok” and briefly pretended to be Steve Rogers (Chris Evans) in “Thor: The Dark World” (2013). Plus, we can’t forget Thor’s classic story from the former film about the time Loki transformed himself into a snake to mess with him. Now it seems that the show will make even greater use of the Trickster God’s ability to shapeshift as he moves throughout time, which plays into the show’s overall theme and leads us to…

5. Loki’s struggle with his identity will be a major focus
A lot of Loki’s actions can be traced back to his struggles with his identity, especially after learning the truth about his origins as a Frost Giant. Waldron teased on the Writers Panel Podcast that he was drawn to the series because of this and revealed during his interview with EW that the character’s interactions with the TVA will force him to look into the mirror and “confront who he is and who he was supposed to be.” Hiddleston also addressed the topic, saying, “If he’s shapeshifting so often, does he even know who he is? And is he even interested in understanding who he is? Underneath all those masks, underneath the charm and the wit, which is kind of a defense anyway, does Loki have an authentic self? Is he introspective enough or brave enough to find out? I think all of those ideas are all in the series — ideas about identity, ideas about self-knowledge, self-acceptance, and the difficulty of it.”

If we were to run with this idea, it would certainly make it easy for “Loki” to lead into “Doctor Strange in the Multiverse of Madness” (2022). Feige seemed to confirm this to be the case ages ago but has now backtracked a bit. Of course, it’s also possible that “Loki” might tie into the next “Thor” film, titled “Thor: Love and Thunder” (2022), which we know for a fact will find Natalie Portman playing a female Thor. It definitely all seems connected.

7. There could be a second season instead of a feature film tie-in
If “Loki” does not connect to either of those films, it’s still possible we’ll see the character again after these six episodes. Feige confirmed in February that some of the Disney+ shows Marvel is developing are intended to run for multiple seasons. Although he has not confirmed which shows those are, or even tipped his infamous hat one way or another, “Loki” is definitely one of the shows that would easily lend itself to multiple seasons. It already exists outside of the main timeline of the MCU, which means the events of the show potentially have little to no effect on the events playing out in the other shows or on the big screen.

This obviously all depends on how the six-episode first season plays out, of course, but it seems that Feige and Hiddleston have found a way to keep the latter around the MCU for as long as he wants to don the costume of the God of Mischief. And from everything we’ve seen or heard from him over the years, it sounds like he’d be more than happy to stick around forever.