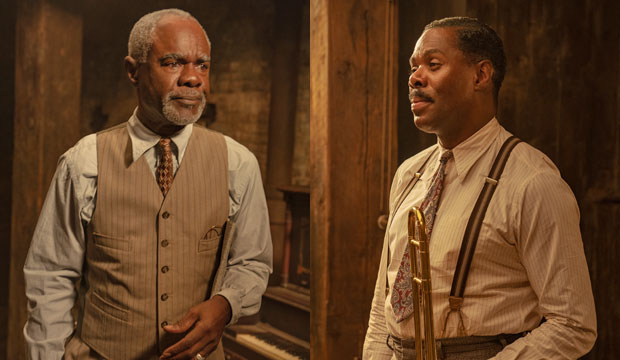 “Ma Rainey’s Black Bottom” premiered in limited theatrical release on November 20, 2020 before streaming on Netflix December 18, 2020. It is an adaptation of the celebrated play of the same title by the late August Wilson. The film is the second adaptation of Wilson’s ten-play Century Cycle, which is being committed to the screen by producer Denzel Washington. Scroll down to watch exclusive video interviews with top Oscar contenders from the film.

The story takes place in 1927 Chicago, detailing behind the scenes drama of a recording session for the real-life “Mother of Blues,” Ma Rainey (Viola Davis). The band arrives at the studio first, where veteran musicians Toledo (Glynn Turman), Cutler (Colman Domingo), and Slow Drag (Michael Potts), are joined by the young and headstrong trumpeter Levee (Chadwick Boseman). Levee is not content with being a background player, and his career ambitions put him in conflict with Ma and the band.

The starry cast is sure to attract Oscar attention. Davis and Boseman have already earned nominations from SAG and the Golden Globes. Davis could become just the second Black woman to win Best Actress at the Oscars, while Boseman could become the third actor to win a posthumous Oscar. As for the supporting players, Domingo and Turman were both nominated at the Indie Spirit Awards. Turman won the Supporting Actor prize from the National Society of Film Critics. The entire cast was nominated for the SAG film ensemble prize.

Wilson himself was a posthumous Oscar nominee for “Fences,” and Ruben Santiago-Hudson will hope to follow in the legendary playwright’s footsteps. Santiago-Hudons’ adaptation of Wilson’s drama has so far picked up nominations from Critics Choice, Writers Guild, and USC Scripter Awards.

With an impressive team both above and below the line, is “Ma Rainey” destined for a massive Oscar haul? Though the play is from 1982 and the story takes place in 1927, the themes of systemic racism and exploitation of Black artists feels as relevant as ever today. The combination of the film’s timely subject matter, reverence for August Wilson, and sentiment for Boseman make this movie a force to be reckoned with at this year’s Academy Awards. Follow the links below to see what the creatives had to say about their experience making “Ma Rainey’s Black Bottom.”