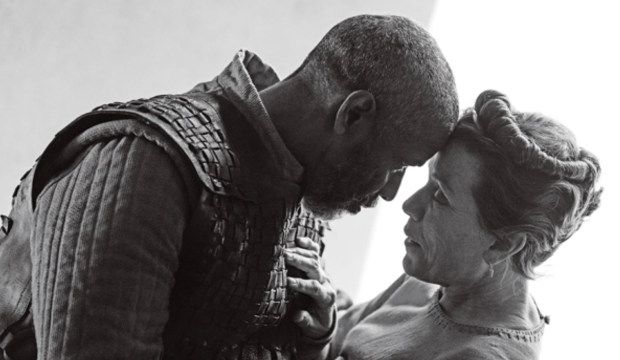 Something wicked this way comes to theaters on Christmas Day: Joel Coen’s “The Tragedy of Macbeth.” (The film will begin streaming on Apple TV + on Jan. 14, 2022). The latest interpretation of Shakespeare’s 1606 Scottish play stars Oscar-winners Denzel Washington as Macbeth, a brave general who hears a prophecy from a trio of witches that he will become king, and Frances McDormand as Lady Macbeth, the general’s ambitious wife, who goads him into killing the King.

It’s the first film the Oscar-winning Coen (“Fargo,” “No Country for Old Men”) has done without his brother Ethan. Coen directed his wife McDormand (they married in 1984) to the first of her three Oscars with 1996’s “Fargo.’ Could this film bag her a 4th?

Even though the play is considered “cursed” that hasn’t stopped directors and actors from tackling the powerful tragedy. The last screen version starring Michael Fassbender and Marion Cotillard and directed by Justin Kurzel was released in 2015. Reviews were generally good; the box office wasn’t.

Several “Macbeth” films were made during the silent era. Though it is considered lost, the most well-known of these silent adaptations was 1916’s feature starring the legendary British stage actor Sir Herbert Beerbohm Tree. He had performed the role numerous times on stage in decided to do a film version so his acclaimed performance would be preserved. D.W. Griffith was a producer; Oscar-winning director Victor Fleming of “Gone with the Wind” fame was one of the cinematographers and Erich von Stroheim, no less, was the assistant director

Shakespeare didn’t have the same appeal with the advent of sound. There was the 1929 “The Taming of the Shrew” with Mary Pickford and Douglas Fairbanks; 1935’s all-star “A Midsummer Night’s Dream”; and 1936’s lavish “Romeo and Juliet” with 34-year-old Norma Shearer and 43-year-old Leslie Howard as the star-crossed “teen” lovers.

It was a dozen years after “Romeo and Juliet” that Orson Welles made “Macbeth” for Republic Pictures. Best known at the time for Roy Rogers Westerns, the studio did occasionally stray into more prestigious production. John Ford’s 1952 “The Quiet Man,” for which he won his fourth directing Oscar, was produced by Republic. Welles was no stranger to the Bard’s play. He was all of 20 when he adapted and directed the 1936 all-black Broadway production of “Macbeth” set in the Caribbean. Known as “Voodoo Macbeth,” it caused a sensation on Broadway and helped to solidify Welles as a major talent.

Welles cast himself in the title role. After Tallulah Bankhead turned him down, he hired longtime Mercury Theatre actress Jeanette Nolan to play Lady M. Because of the film’s low budget, he rehearsed the actors during a short stage production in Utah and pre-recorded the dialogue. Welles had the actors speak in Scottish accents and then had the actors lip-sync the lines. Welles also used the pre-recordings as inner monologues. He changed several aspects of the play including combining the first and second acts. Shot on 23 days, the film benefits from John L. Russell’s moody, atmospheric black-and-white cinematography,

“Macbeth,” which Welles referred to as an experimental film, was not warmly embraced when it previewed in San Francisco and Salt Lake City in the fall of 1948. Audiences complained that they couldn’t understand the actors because of the heavy Scottish accents and found Nolan’s performance too stylized. The Hollywood Reporter declared it “one of the most disastrous of motion picture enterprises.” With Welles out of the country, Republic put the film’s associate producer Richard Wilson in charge of re-editing and re-recording “Macbeth.” The edited version-clocking in at a trim 86 minutes-was released in 1950. It flopped with both critic and audiences. Both its reputation has grown enormously since it was restored by UCLA Film and Television Archive in 1980. The 21-minutes that were cut by Republic were restored, as well as the original audio track.

Roman Polanski also endured slings and arrows from the critics and audiences with his violent 1971 take “The Tragedy of Macbeth,” starring the young and sexy Jon Finch and Francesca Annis and produced by Hugh Hefner’s Playboy Enterprises. Shot on the British Isles, the stark, violent and nudity-laden was informed by the murder two years earlier of his wife Sharon Tate and their unborn son by the Manson Family. Britain’s official film censors were shocked at the film with one examiner horrified of “a disgusting savage and horrid murder” and “infants murdered and ground into blood.” The examiner was especially angered that Lady Macbeth was nude while sleeping walking. The examiner stated, “this is classic horror comic stuff and reeks of the Sharon Tate shambles. And just as Welles’ “Macbeth,” the Polanski’s version is now considered one of his best works.

Even more unusual adaptations of the Scottish playing include 1955’s “Joe Macbeth,” which moved the action to the criminal underworld in the U.S. during the Depression, and 2001’s dark comedy ‘Scotland, PA.” centered around the small-town diner.

Akira Kurosawa brilliantly transformed “Macbeth” from medieval Scotland to feudal Japan and incorporated many aspects of Noh drama, the classic stylistic form of dance-drama that began in Japan since the 14th century, in his 1957 masterpiece “Throne of Blood.” The phantasmagorical production starred frequent Kurosawa leading man, Toshiro Mifune as General Washizu and Isuza Yamada as his devious, manipulative wife. Three years later, Kurosawa used “Hamlet” as the inspiration for “The Bad Sleep Well” and earned his first and only Oscar nomination for Best Director for 1985’s “Ran,” the filmmaker’s take on “King Lear.”