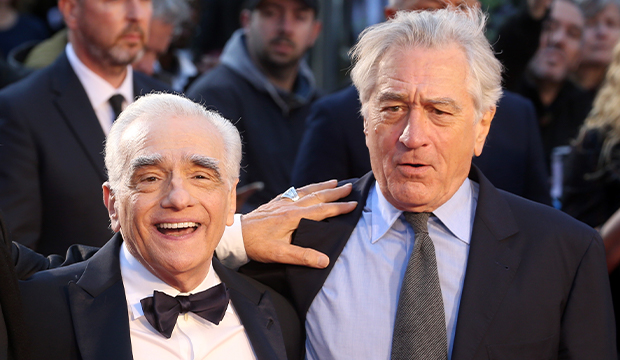 Among the most fruitful actor-director pairings in movie history, Martin Scorsese and Robert De Niro have earned critical plaudits and a slew of awards for their collaborations over the years. The two first paired up for the Little Italy coming-of-age story “Mean Streets” (1973), a commercial breakout for both that established them as a duo to watch in the burgeoning New Hollywood of the 1970s.

They followed that up with “Taxi Driver” (1976), a violent character study which earned De Niro a Best Actor Oscar nomination and won Scorsese the Palme d’Or at Cannes. Their next outing, the ambitious musical “New York, New York” (1977), brought De Niro a Golden Globe nomination as Best Comedy/Musical Actor.

They had greater Oscar success with the boxing biopic “Raging Bull” (1980), which won De Niro Best Actor and earned Scorsese his first bid as Best Director. Both competed at BAFTA for the darkly comic “The King of Comedy” (1982), while Scorsese contended for both writing and directing the gangland epic “GoodFellas” (1990), their next collaboration after eight years apart.

De Niro returned to the Oscar Best Actor race with “Cape Fear” (1991), Scorsese’s violent update of the 1962 Robert Mitchum/Gregory Peck thriller. They followed that up with “Casino” (1995), a sort of spiritual “GoodFellas” sequel set in Las Vegas which brought the director a Golden Globe bid. Another 24 years would pass before the two teamed up again for “The Irishman” (2019), a decades-spanning mob drama which earned them both an Oscar nomination for Best Picture, plus another directing bid for Scorsese.

All of these titles are featured on our list of Martin Scorsese and Robert De Niro’s movies ranked. Where does your favorite place on the list?

An uneasy collision between the colorful extravagance of Old Hollywood musicals and John Cassavetes-style improvisational realism, “New York, New York” is scattershot but never boring. Set during WWII, it stars De Niro as a jazz saxophonist who embarks on a doomed romance with an aspiring singer (Liza Minnelli). A notorious bomb in its day, it’s got moments of brilliance thanks to the passionate performance and the sheer scale of it all. Minnelli’s signature number, the Kander and Ebb-penned “New York, New York,” is a particular highlight, and the tune later became a hit for Frank Sinatra. The movie earned four Golden Globe bids, including Best Comedy/Musical Film, acting bids for De Niro and Minnelli and Best Song.

There’s no competing with Robert Mitchum’s performance in the original “Cape Fear” (1962), so De Niro doesn’t even try. He instead creates his own bone-chilling villain in Scorsese’s bloody remake, which adds a psychological complexity to the classic thriller. In this version, Max Cady, a convicted rapist stalking the defense lawyer (Nick Nolte) who sent him to prison, is an almost Biblical baddie, replete with tattoos and a wrathful rage. There’s also an eerie charisma to him, showcased in the scene where he seduces the attorney’s teenage daughter (Juliette Lewis), which makes our skin crawl with its creepy sensuality. The results are one of the biggest box office successes from the director and star, one that brought De Niro a Best Actor Oscar bid.

Often dismissed as a second-tier “GoodFellas,” “Casino” is a wildly ambitious, glorious entertainment in its own right. De Niro anchors this operatic saga as Sam “Ace” Rothstein, a Jewish American gangster placed in charge of the Tangiers Casino in Las Vegas. (His character is based on real life mafioso Frank Rosenthal.) Though he tries to stay above the fray, the glitz and glamour of Sin City soon destroy him, his hooker wife (Best Actress Oscar nominee Sharon Stone) and his mob enforcer pal (Joe Pesci). An actor known for playing big, De Niro proves to be just as menacing when scaling back, with a violent rage boiling underneath. Scorsese’s colorful direction of this three-hour epic earned him a Golden Globe nomination.

For anyone who’s ever chased the spotlight at the expense of everything else, Scorsese’s darkly funny “The King of Comedy” might serve as a cautionary tale. De Niro stars as Rupert Pupkin, a seriously delusional would-be comic who practices his mediocre routines in his basement, complete with a mock set-up and cardboard cutouts of celebs. He idolizes the nation’s top late night host, Jerry Langford (Jerry Lewis), and relentlessly pursues him with his equally unstable friend (Sandra Bernhard). When his stalking gets out of control, he kidnaps his hero and refuses to release him until he’s given a prime spot on his show. A middling success in its day, the film did nevertheless earn BAFTA nominations for De Niro, Scorsese and Lewis.

This Little Italy-set ode to Federico Fellini‘s “I Vitelloni” (1953) was the first collaboration between De Niro and Scorsese, and what a way to kick things off! As Johnny Boy, a petty hood who behaves like a court jester, the actor gave the performance that made him a star, perfectly embodying the tightrope-walk between joviality and violence that came to define his favorite director’s best work. Johnny Boy is a constant hassle for his best friend, Charlie (Harvey Keitel), insulting mob bosses by borrowing their money and failing to pay them back, then laughing in their faces about it. The whole thing ends with a bloodbath that tears the two apart as they try to escape their dead end lives.

At three-and-a-half-hours, “The Irishman” is a sprawling culmination of the many themes the director and star have explored throughout their careers, foregoing the glitz and glamour of their other gangster films (particularly “GoodFellas”) for a somber and funereal mob epic. De Niro plays Frank Sheeran, a low level truck driver who becomes a hitman after crossing paths with Teamsters head Jimmy Hoffa (Al Pacino) and Mafia bigwig Russell Bufalino (Joe Pesci). Groundbreaking special effects and makeup allow the actor to play the character throughout several decades, from his humble beginnings to his tragic end. The film brought De Niro and Scorsese an Oscar bid for Best Picture, while Scorsese competed once again for Best Director.

One of the great qualities of Scorsese’s working man’s gangster flick is how it creates a sense of family amongst criminals. For Henry Hill (Ray Liotta), it’s not just the money, girls and great food that makes him want to be a wiseguy: it’s the feeling of acceptance from his fellow hoods. There’s a brotherhood formed with the practical, fatherly Jimmy Conway (De Niro) and the fiery, hair-trigger Tommy DeVito (Joe Pesci in an Oscar-winning performance), which makes the eventual dissolution of their relationships all the more tragic. But before that, “GoodFellas” is the liveliest and most entertaining mafia movie ever made (all due respect to “The Godfather”), and Scorsese was rewarded with Oscar bids for writing and directing.

There are few moments as chilling as when alienated cabbie Travis Bickle (De Niro) stares in the mirror and asks, “Are you talking to me? Well, I’m the only one here.” Paul Schrader‘s nightmare fantasia follows Bickle as he prowls the New York streets at night in his yellow chariot. Every attempt to connect fails, most spectacularly with a beautiful political campaign worker (Cybill Shepherd). But there’s a chance at bloody redemption when he decides to rescue a teenage prostitute (Jodie Foster) from her pimp (Harvey Keitel). Scorsese burrows deep into the character’s scarred psyche, and the results are truly frightening. De Niro earned an Oscar bid for Best Actor, while Scorsese won the Palme d’Or at Cannes and competed at DGA.

De Niro’s performance as boxer Jake LaMotta quickly became the stuff of legends. After filming the first half, production shut down for four months so that he could gain a whopping 70 pounds to play the former heavyweight in middle age. Yet it’s not just the massive belly that’s impressive: the actor dives headfirst into the soul of a man who allowed his body to be pummeled as retribution for the the jealous rage that drove away his wife (Cathy Moriarty) and manager brother (Joe Pesci). Scorsese’s direction gets viewers uncomfortably close to the violence inside the ring and the home, creating a fascinating character study masked as a sports drama. De Niro won the Oscar for Best Actor, while Scorsese earned his first nomination for Best Director.