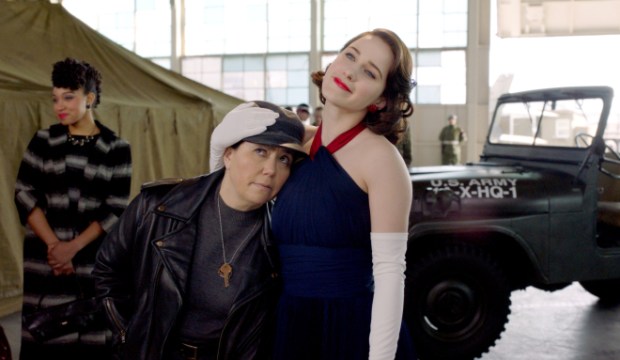 The Amazon comedy series “The Marvelous Mrs. Maisel” premiered its first season on March 17, 2017. Produced by the married team of Amy Sherman-Palladino and Dan Palladino (“Gilmore Girls,” “Bunheads”), the show is set in the late ’50s and early ’60s and revolves around Miriam “Midge” Maisel (Rachel Brosnahan), a young Upper West Side Jewish homemaker and mother of two. She decides to pursue a secret career as a stand-up comic after her husband Joel (Michael Zegen) has an affair with a co-worker and leaves her. Scroll down for our exclusive video interviews with top Emmy contenders from Season 3.

SEE‘The Marvelous Mrs. Maisel’ ties its own Emmy record for a comedy series: 8 wins in a single year

Brosnahan won a Best Comedy Actress Emmy as the adorably profane if self-absorbed clotheshorse Midge for her first-season performance, contributing to the show’s record eight wins for a comedy series in a single year. In addition to winning Best Comedy Series, Sherman-Palladino became the first woman in history to claim trophies for both Best Comedy Writing and Best Comedy Directing.

Season 2 premiered on December 5, 2018 and managed to tie the show’s Season 1 record with eight Emmys. Viewers were able to visit Paris with Midge and her parents Abe (Best Comedy Supporting Actor winner Tony Shalhoub) and Rose (Marin Hinkle) and tagged along on their annual summer family getaway at a Catskills resort.

The final two episodes involving a fortuitous meeting during a telethon set up Season 3, which premiered on December 6, 2019. In that most recent collection of episodes, Midge and her manager Susie Myerson (two-time Emmy winner Alex Borstein) hit the road and went on tour with popular crooner Shy Baldwin (Leroy McClain) to Las Vegas and Miami Beach. Matters end badly, however, for Midge and Susie, both financially and career-wise.

Season 4 will become a reality once the COVID-19 pandemic is over and production can safely resume. In the meantime, follow the links below to see what cast members and the creative team have to say about the show’s most recent episodes.