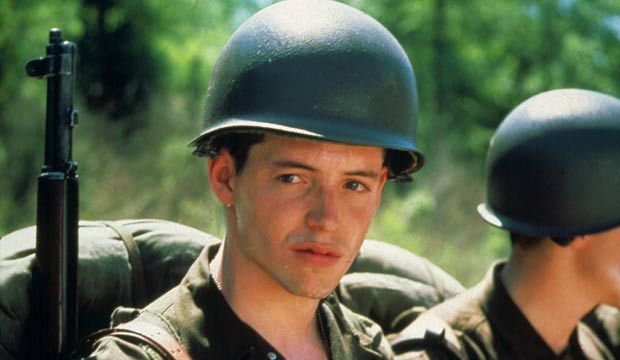 Happy 57th birthday to Matthew Broderick on March 21, 2019! A true star of stage, screen and television, Broderick first came to moviegoers’ attention 36 years ago in the thriller “WarGames” and since then has triumphed in comedies, dramas and musicals both on stage and in film.  Add to that his 22 year marriage to Sarah Jessica Parker, and there’s a lot for him to celebrate.

For his stage work, Broderick has won two Tony Awards (as Best Featured Actor for 1983’s “Brighton Beach Memoirs” and as Best Actor for the 1995 revival of the musical “How to Succeed in Business Without Really Trying”), as well as an additional Best Actor nom for 2001’s “The Producers” for a performance that he brought to the screen in the 2005 film. In 1993, he was also nominated for a Primetime Emmy for his supporting performance in “A Life in the Theatre.” And for his film work, Broderick earned a Golden Globe nomination for 1986’s “Ferris Bueller’s Day Off,” as well as a SAG ensemble nomination for “Manchester by the Sea” in 2016.

So let’s raise a glass to the great Matthew Broderick with the photo gallery above. It features his 12 greatest movie performances, ranked worst to best, including the films mentioned earlier plus “Glory,” “Election,” “The Lion King” and more.

Check out how our experts rank this year’s Emmy contenders. Then take a look at the most up-to-date combined odds before you make your own 2019 Emmy predictions. Don’t be afraid to jump in now since you can keep changing your predictions until just before nominations are announced on July 16.