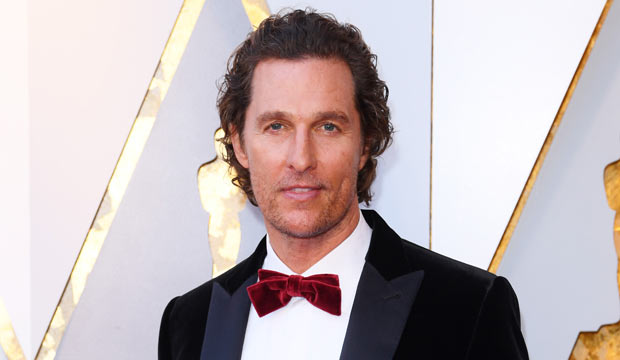 Matthew McConaughey‘s career has had more ups and downs than a sentence delivered in his usual Texas twang. After a few small roles, McConaughey was cast opposite an equally unknown Renee Zellweger in “Texas Chainsaw Massacre: The Next Generation” one of the many incarnations of that horror series. Then things suddenly seemed to blossom for the Texas actor and suddenly he had the lead in an adaptation of the John Grisham novel “A Time to Kill” and was on the cover of Vanity Fair magazine being hailed as the new Paul Newman. After a series of successful films, things seemed to go off track for McConaughey. He did a number of less than stellar romantic comedies and became more known for his tanned muscular torso than his acting talents.

McConaughey seemed to become aware of his career slump in the early 2010s and made a conscious change to redirect his career. He started turning down roles that emphasized his hunk status and instead looked for roles in small independent films which flexed his acting muscles rather than his biceps. The move worked. In early 2014 McConaughey found himself at the top of the heap in two mediums. On television he starred in the highly acclaimed first season of “True Detective” (ultimately earning an Emmy nomination), and on film his appearance in “Dallas Buyers Club” earned him the Oscar for Best Actor, an achievement that once did not seem in the cards for the actor.

He now has the film “White Boy Rick,” which tells the story of a teenage boy who gets involved with drug trafficking after being hired by the F.B.I. as an informant. To coincide with the opening of that film, Gold Derby takes a photo gallery tour of his 15 greatest movies, ranked worst to best, including the ones mentioned above plus “Interstellar,” “Mud” and “Magic Mike.”

15. THE LINCOLN LAWYER (2011)
McConaughey plays a sophisticated Los Angeles attorney who does most of his business in the back seat of his chauffeur driven Lincoln Town Car in this John Grisham-like courtroom drama. The character tries to defend a wealthy Beverly Hills playboy who is accused of murdering a prostitute. McConaughey finds himself in a moral quandary when he begins to think his client might be guilty.

14. AMISTAD (1997)
“Amistad” tells the story of a slave revolt on a ship bringing Africans to the United States. McConaughey plays a lawyer assigned to defend the slaves. He was pretty new to historical prestige pictures such as this and has discussed how Steven Spielberg asked him to work harder on his accent and character to keep up with the level of acting he expected.

13. CONTACT (1997)
“Contact” is a strange film on McConaughey’s resume. While it is one of the best films he has ever been in his character always seemed a bit out of place and unnecessary in the film. The film stars Jodie Foster as a researcher trying to make “contact” with alien life forms from other planets. McConaughey plays her love interest who is a Christian philosopher battling with his faith and the religious implications of making alien contact.

12. FRAILTY (2001)
Bill Paxton directed and starred in this thriller about a man obsessed with destroying the demons he sees around him due to his religious fanaticism. His two young sons are greatly influenced by the father’s rages. McConaughey plays the adult version of one of the boys who believes his brother has become a serial killer.

11. BERNIE (2012)
McConaughey reunited with director Richard Linklater for this film about a small town mortician (Jack Black) who befriends a local widow (Shirley MacLaine in one of her angry old women roles) and then murders her after suffering much abuse from her. The woman is so hated that some townspeople think she deserved to die, and McConaughey his a rough time prosecuting the murderer.

10. LONE STAR (1996)
MConaughey had one of his first lead roles in this film from pioneering independent filmmaker John Sayles. He plays a small town sheriff who tries to unravel the complicated story of how his predecessor in the role of sheriff was killed.

9. BOYS ON THE SIDE (1995)
This road movie features three women traveling across country each trying to escape a troubled past and start life anew. Drew Barrymore plays the youngest and flightiest of the three. She is pregnant and fleeing her abusive boyfriend. McConaughey plays a sensitive cop the three women meet and with whom Barrymore’s character falls in love.

8. INTERSTELLAR (2014)
Director Christopher Nolan cast McConaughey as an engineer who travels through a worm hole in space in an effort to save humanity. By taking on the mission, he is forced to leave behind his young daughter. That daughter though will grow up to play a highly important part in humanity’s survival.

7. THE WOLF OF WALL STREET (2013)
The front runners for the 2013 Oscar race were McConaughey for “Dallas Buyers Club” and Leonardo DiCaprio for “The Wolf of Wall Street.” Ironically McConaughey had a small role opposite DiCaprio in this Martin Scorsese film. The film is a true story of the sordid and corrupt side of Wall Street with McConaughey as DiCaprio’s first boss, who lures him into the profession with an elaborate lunch in a fancy restaurant.

6. DAZED AND CONFUSED (1993)
This film about the last days of a high school year in suburban Texas was highly acclaimed for its improvisational style and realistic filming by Richard Linklater. The film features a huge cast many of which went on to prominence (Renee Zellweger, Ben Affleck, Parker Posey.) The film is responsible for giving McConaughey his laid back stoner image which haunted him a bit through his early career.

5. A TIME TO KILL (1996)
In 1996, adaptations of John Grisham novels were quite profitable and drawing A-List stars as their lead performers. Tom Cruise did “The Firm”. Julia Roberts did “The Pelican Brief.” When it came to this film, though, Grisham insisted on casting an actual southern actor in the lead role. The little known McConaughey was given the lead. To compensate for having a lesser known leading male, Sandra Bullock was enlisted for the second lead and given top billing on the film.

4. KILLER JOE (2011)
Based on a play by writer and actor Tracey Letts, this was the second time director William Friedkin had chosen to adapt one of Lett’s plays. He had previously made the film “Bug” starring Ashley Judd and Michael Shannon. McConaughey plays a police detective and part time contract killer who is hired by a young drug dealer in debt.

3. MAGIC MIKE (2012)
By 2012 McConaughey had become more famous for taking his shirt off in romantic comedies than for genuine acting talent. He consciously tried to alter that image, and ironically this film about male strippers was one of the ones that made that transition possible. McConaughey parodied his image as a preening exhibisionist with such skill that he won the Independent Spirit and New York Film Critics Circle Awards as Best Supporting Actor.

2. MUD (2013)
McConaughey plays a fugitive who convinces two young boys to help him evade a vigilante group that is pursuing him and help reunite him with his first love played by Reese Witherspoon. The movie received great acclaim and was another key stepping stone in helping McConaughey redirect his career towards serious roles.

1. DALLAS BUYERS CLUB (2013)
“Dallas Buyers Club” marked the culmination of McConaughey’s refocusing of his career away from romantic fluff and towards serious film. He plays a real life man dying of AIDS who creates a business that helps get a drug to suffering patients which they are unable to get from the medical community. McConaughey won a slew of awards for the role including the 2013 Oscar for Best Actor.