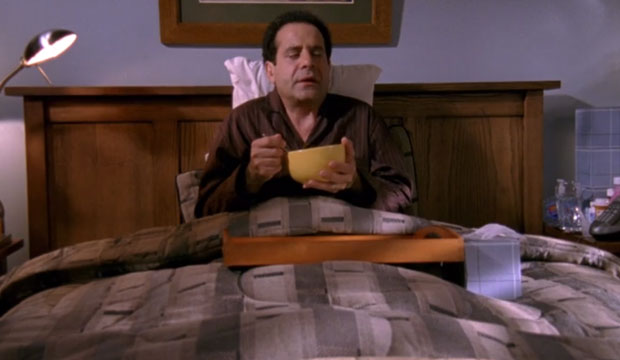 Here’s what happened. . .  San Francisco Police Department detective Adrian Monk (Tony Shalhoub) had his wife Trudy helping him to conquer many of his numerous phobias and extreme OCD. She was then killed by a car bomb. It’s the one crime the brilliant detective can’t solve, catapulting him into a severe depression, making all of his fixations and neuroses even more extreme. Although he’s convinced he’ll never be happy again and knows it’s a jungle out there, he rejoins the world as a private detective, often consulting with the SFPD and his former colleague Captain Leland Stottlemeyer (Ted Levine).

Poor Stottlemeyer is often exasperated by Monk, whose 312 phobias, extreme OCD and obsession with his wife’s death sometimes hinder an investigation. But the homicide chief also acknowledges that Monk is the greatest living detective, with his idiosyncrasies giving him the ability to pick up details that others miss, often using his hands as a guide to see the smaller parts of a bigger picture. Monk is always right, uncovering truths when at times foul play isn’t even suspected, bringing principle characters back in an old-fashioned “here’s what happened” moment. Because of Monk’s perfect track record, Stottlemeyer is firmly in Monk’s corner, helping him in his goal to get his badge back.

It took a few years for “Monk” to come together, with the biggest challenge in finding the perfect actor to portray this over-the-top character without making him a caricature. John Ritter, Henry Winkler, Michael Richards, Stanley Tucci and Alfred Molina were all considered, with the last two appearing as guest stars during the show’s run. But it was Shalhoub who realistically brought humor and humanity to a character that could have easily crossed the line to obnoxiousness; in the process, Shalhoub took home three Emmys, two SAG awards and a Golden  Globe.

Such a quirky and memorable character deserves a proper intro, and Monk had not one, but two. Jeff Beal wrote the instrumental “Monk’s Theme” for Season One, winning an Emmy; for Season Two, Randy Newman‘s “It’s a Jungle Out There” took over, and also won an Emmy. “Monk” is the first series to have two different theme songs win in consecutive years. The decision to change theme songs was controversial, which was referenced in a couple of episodes; “Monk’s Theme” continued to be used at various points throughout the series.  Newman won an additional Emmy for “When I’m Gone,” which was written for the last episode of the series.

We all felt Monk’s pain over the tragic loss of his wife, cheered him on when he’d move a step closer, and felt his grief, when in the end, he discovered that one of his greatest obsessions was actually the clue to solving the crime. But until that point, for 125 episodes, we got to see the “defective detective” at work — here are 25 of the most memorable in our photo gallery celebrating the USA Network’s 20th anniversary.