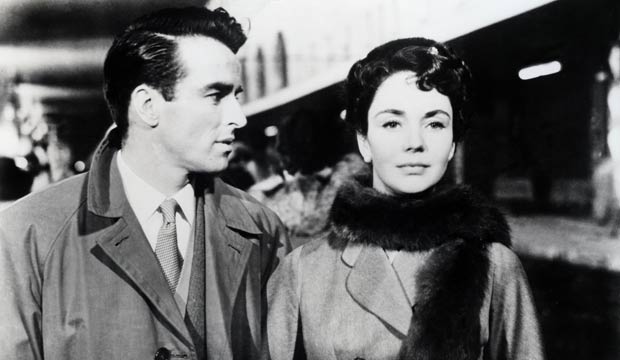 Montgomery Clift would’ve celebrated his 98th birthday on October 17, 2018. The iconic actor gave only a small number of onscreen performances before his untimely death in 1966 at the age of 45. Yet several of those titles remain classics. In honor of his birthday, let’s take a look back at 12 of his greatest films, ranked worst to best.

A product of the Actor’s Studio, where he studied under Lee Strasberg and Elia Kazan, Clift had a successful Broadway career before moving to Hollywood. Among his notable stage credits was the role of Henry in Thornton Wilder’s Pulitzer Prize-winning “The Skin of Our Teeth.” Like James Dean and Marlon Brando, he was one of the original method actors, calling upon past memories and experiences to inform his performances.

He came to the attention of movie audiences in 1948 with a pair of releases: Howard Hawks‘ western “Red River” and Fred Zinnemann‘s WWII drama “The Search.” The latter film brought him an Academy Award nomination as Best Actor. He would contend three more times at the Oscars (Best Actor for “A Place in the Sun” in 1951 and “From Here to Eternity” in 1953; Best Supporting Actor for “Judgment at Nuremberg” in 1961).

Clift’s career was irrevocably altered by a near-fatal car accident during the filming of “Raintree County” (1956). He apparently fell asleep behind the wheel and crashed into a tree when leaving a dinner party held by his longtime friend and costar Elizabeth Taylor, who saved his life by digging a tooth out of his throat. Though plastic surgery partially reconstructed his face, he became increasingly dependent on drugs and alcohol to work through his physical and emotional pain. As a result, his film roles became fewer and farther between.

Tour our photo gallery above of Clift’s 12 greatest films, including a few performances that should’ve resulted in Oscar victories.

12. INDISCRETION OF AN AMERICAN WIFE (1953)
Also known as “Terminal Station,” this film had a troubled journey to the screen. Vittorio De Sica, the Italian neorealist behind “Bicycle Thieves” and “Umberto D.,” was hired by mega-producer David O. Selznick (“Gone with the Wind”) to helm this romantic drama as a vehicle for his wife, Jennifer Jones. She plays the titular housewife, who falls in love with a dashing Italian (Clift) while on vacation abroad.

11. THE YOUNG LIONS (1958)
This rousing adaptation of Irwin Shaw’s epic novel centers on three disparate soldiers during WWII: a German (Marlon Brando) disillusioned with Nazism; a Jewish American (Clift) who has to deal with antisemitism within his own ranks; and an entertainer (Dean Martin) drafted into service just as his career is lifting off. Though trimmed for censorship concerns, director Edward Dmytryk and screenwriter Edward Anhalt capture the scope and intimacy of the original story.

10. SUDDENLY, LAST SUMMER (1959)
“Suddenly, Last Summer” is the kind of lurid blending of homosexuality and cannibalism that only Tennessee Williams could conceive. Clift plays a psychiatrist summoned by the wealthy Mrs. Venable (Katharine Hepburn) to lobotomize her niece (Elizabeth Taylor), who harbors a terrible secret about the death of her cousin, Sebastian. Director Joseph L. Mankiewicz films this disturbing material as explicitly as the censors would allow,.

9. WILD RIVER (1960)
In “Wild River,” Clift gives one of his best performances as Chuck Glover, a TVA bureaucrat trying to get a stubborn octogenarian (Jo Van Fleet) to sell her riverside property for future development. At the same time, Glover runs afoul of the locals for his humane treatment of the town’s black population. Elia Kazan’s evocative recreation of 1930s Tennessee and the tender romance between Clift and Lee Remick as the woman’s granddaughter make this a must-see hidden gem. Look out for an uncredited Bruce Dern in his acting debut.

8. I CONFESS (1953)
“I Confess” isn’t mentioned much by Alfred Hitchcock aficionados, or fans of Clift for that matter. Indeed, this drama about a priest who hears a murder confession and is wrongfully accused of the crime was largely overlooked upon its release. Yet the stark, black-and-white cinematography (courtesy of frequent collaborator Robert Burks) showcases some of the director’s most striking imagery and symbolism. Clift is brilliant as always as a man conflicted by commitment to his profession and commitment to his freedom.

7. THE MISFITS (1961)
John Huston’s “The Misfits” occupies a sad place in cinema history: Clark Gable died before the it’s release, Marilyn Monroe shortly thereafter, while Clift would make only three more movies before his own untimely demise in 1966. Written by Monroe’s then-husband, Arthur Miller, it revolves around a beautiful divorcee (Monroe) in love with a past-his-prime cowboy (Gable) who, along with his partners (Clift and Eli Wallach), grinds up “misfit” horses into dog food.

6. THE SEARCH (1948)
Clift first came to the attentions of movie audiences in this war drama from Fred Zinnemann (his feature debut, “Red River,” was shot in 1946 but wasn’t released until six months after this one). He plays Ralph Stevenson, an American G.I. stationed in post-war Berlin helping a young Czech boy (Ivan Jandl) find his mother (Jarmila Novotna), who lost contact with him while in Auschwitz. Shot on location in Europe, “The Search” benefits from a gritty naturalism in its direction and performances

5. THE HEIRESS (1949)
Clift became a romantic lead with this sensitive melodrama by William Wyler, adapted from Ruth and Augustus Goetz’s play (itself based on Henry James’ novel “Washington Square”). Olivia de Havilland won her second Best Actress Oscar for playing a dowdy spinster in 19th century New York who falls in love with a raffish young man (Clift) despite protestations from her cruel father (Ralph Richardson). Turns out the old man is right, since her lover is just in it for the money.

4. JUDGMENT AT NUREMBERG (1961)
This long, engrossing adaptation of Abby Mann’s “Playhouse 90” television play remains one of the most powerful dramas about the atrocities of the Holocaust. Directed by Stanley Kramer, “Judgment at Nuremberg” centers on an American judge (Spencer Tracy) in 1948 Germany presiding over the trial of four Nazi judges (most notably Burt Lancaster and Werner Klemperer) convicted of war crimes. Clift gives a brief yet memorable performance as a haunted victim of forced sterilization who testifies on the stand.

3. FROM HERE TO ETERNITY (1953)
James Jones’ epic novel translates beautifully to the screen in this Best Picture winner, albeit with a few alterations for length and content. Directed by Fred Zinnemann, the film centers on the lives of three U.S. soldiers (Clift, Burt Lancaster and Frank Sinatra) stationed in Hawaii in the months leading up to the attacks on Pearl Harbor. Clift plays Private Robert E. Lee Prewitt, a sensitive soul cruelly punished for not boxing on the unit’s team.

2. RED RIVER (1948)
Clift made his movie debut in this quintessential western from Howard Hawks (though it was released six months after his second feature, “The Search”). “Red River” centers on the conflict between headstrong rancher Tom Dunson (John Wayne) and his adoptive son, Matt Garth (Clift), during a cattle drive. Tom’s tyrannical behavior leads to a mutiny and a bitter rivalry between the two. The film is notable for its buried gay subtext between Matt and the rambunctious cowboy Cherry Valance (John Ireland).

1. A PLACE IN THE SUN (1951)
Though it won raves from critics and snatched up 6 Academy Awards (including Best Director for George Stevens), today’s viewers often dismiss “A Place in the Sun” as pat and outdated. Yet this story of an ambitious social-climber (Clift) who marries a dowdy factory worker (Shelley Winters) and falls in love with a glamorous socialite (Elizabeth Taylor) remains a powerful and enchanting melodrama. The chemistry between its two leads — who would remain lifelong friends throughout their many ups-and-downs — is heartbreaking in its intensity.