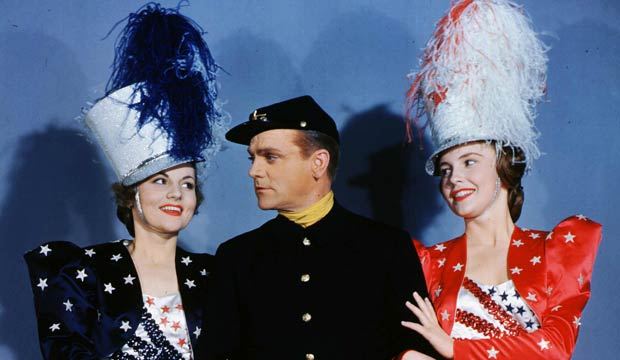 Six years before his death in 1996, “Rent” composer Jonathan Larson began performing a solo semi-autobiographical musical “tick, tick … Boom!” about a young struggling composer named Jon who fears that he has made the wrong career choice. After his death, Larson’s show was expanded into a three-person piece by David Auburn that ran in London, off-Broadway, and as a national tour. Now it is an acclaimed new Netflix movie directed by Lin-Manuel Miranda (who appeared in a Encores production of the musical in 2014) and starring Andrew Garfield.

The composer bio movie genre has long been a favorite of Hollywood, especially during its Golden Age. But these bio-pics played fast and loose with the facts. The Production Code prevented these films from exploring the fact that Cole Porter and Lorenz Hart were gay. And some of these composers and/or their families were still alive and wanted a certain image presented on the big screen. As Oscar Levant quipped about “Rhapsody in Blue,” the 1945 film about George Gershwin, “even the lies about him were being distorted.” Let’s take a closer look at some of these classic movie musicals.

“Yankee Doodle Dandy” (1942)
The Rolls-Royce of composer-bio pics thanks to Michael Curtiz’ fluid direction and James Cagney’s Oscar-winning powerhouse performance as George M. Cohan, who was alive when the film was in production and died five months after it was released. Cohan had written and produced some 35 plays and wrote 500 songs including such standards as “Give My Regards to Broadway,” “I’m a Yankee Doodle Dandy,” “Over There “ and “Mary.” Though Cagney was best known for playing steely-eyed gangsters, he was a song-and-dance before his movie stardom, and the actor is exuberant in his musical numbers especially “Give My Regards to Broadway.” It’s a performance for the ages and Cagney’s only Oscar.

Cohan had complained about how he was being depicted in the script. Associate producer William Cagney, the actor’s brother, executive producer Hal B. Wallis, and screenwriter Robert Buckner sent a letter to Cohan explaining that bio-pics produced by Warner Brothers often change the facts for dramatic purposes: “Under your construction…the story is concerned largely with your chronology of production, interspersed with personal scenes…We believe that the deep-dyed Americanism of your life is a much greater theme than the success story.” Thirteen years later, Cagney reprised his role of Cohan in a sprightly dance number with Bob Hope in “The Seven Little Foys.”

“Rhapsody in Blue” (1945)
This “biography” of George Gershwin, who had tragically died of a brain tumor at the age of 38 in 1937, was a huge hit for Warner Bros.  Robert Alda, dad of Alan, stars as Gershwin in the film that featured Oscar Levant, Al Jolson and Paul Whiteman playing themselves as well as 22 of George and his brother Ira’s best-loved songs. According to TCM.com, the reason why so many writers were put on the project was because “the lack of dramatic material in Gershwin’s life. It wasn’t that his life was devoid of romance. He was rumored to have had flings with everyone from Adele Astaire to Fay Wray. Friends noticed that he was always proposing to beautiful women, none of whom took him seriously. None of that was considered screen worthy, so writers Sonya Levien, Elliot Paul and Howard Koch created two fictional romances for the film.”

“Night and Day” (1946)
With the success of “Rhapsody in Blue,” Warner Bros. next explored the life and music of Cole Porter of “Anything Goes” fame who was still a major player on Broadway and in films. Cary Grant was selected to play Porter and Alexis Smith  his wife Linda. Curtiz also directed this Technicolor hit which totally skirts the composer’s homosexuality-after all it’s 1946. The musical numbers are great fun and you’ll have a kick watching Grant in his first color film.

“Till the Clouds Roll By” (1946)
MGM recruited its top musical stars for this basically fictitious, Technicolor bio-pic on Jerome Kern (“Show Boat”) including Judy Garland, June Allyson, Van Johnson, Angela Lansbury, Lena Horne, Frank Sinatra, Kathryn Grayson and Lucille Bremer to appear in the numerous numbers. The studio’s boy-next-door star Robert Walker plays Kern, who had died in Nov. 1945. Critics were not happy with this film, especially the New York Times: “Why did Metro…have to cook up a thoroughly phony yarn about the struggles of a chirpy young composer to carry the lovely songs of Jerry Kern? And why did it have to do it in such a hackneyed and sentimental way as to grate on the sensibilities of even the most affectionately disposed?” Still, MGM must have thought Walker made beautiful musical playing composers because the following year he played Johannes Brahms in “Song of Love.”

“Words and Music” (1948)
Sumptuous Technicolor MGM musical bio-pic on composers Lorenz Hart and Richard Rodgers (“Pal Joey,” “On Your Toes”) which shies away from reality. Hart (Mickey Rooney) was a gay, alcoholic, who was just 48 when he died in 1943, and Rodgers (Tom Drake) played his personal cards close to his vest. The best and really only reason to watch the film is for the 14 musicals numbers including Rooney and Garland singing “I Wish I Were in Love Again” and Lena Horne’s renditions of “The Lady is a Tramp” and “Where or When.” The real showstopper is Gene Kelly and Vera-Ellen dancing the very sexy “Slaughter on Tenth Avenue” ballet from “On Your Toes.”

“Three Little Words” (1950)
MGM was back in the “so-called” bio-business with this Technicolor hit based on the lives and songs of Bert Kalmar (Fred Astaire) and Harry Ruby (Red Skelton). The film also stars Gloria De Haven -playing her own mother- young Debbie Reynolds as singer Helen Kane, as well as Vera-Ellen, who makes a lovely dance partner with Astaire, and Keenan Wynn. “Three Little Words” was more factual than the usual bio-fare (Kalmer had died in 1947)) and was one of Astaire’s personal favorites. Among the great songs featured including the title tune, “Who’s Sorry Now?” and “I Wanna Be Loved by You.” And a lot of the critics had love for the film including Variety: “For Astaire, it’s unquestionably his best picture in sometime. His [dancing],  as always, is tops, his singing is adequate and his characterization of Kalmar, while never deeply-etched, does full justice to the late songwriter’s many talents,” adding that Vera-Ellen matches Astaire “tap for tap…and looks to be the best partner he’s ever had.”

“The Best Things in Life are Free” (1956)
When one thinks of movie musicals, one doesn’t envision Ernest Borgnine as one of the stars. But Borgnine, then a recent Oscar winner, is playing composer Lew Brown, who joins forces in the 1920s with fellow Tin Pan Alley composers Buddy De Sylva (Gordon MacRae) and Ray Henderson (Dan Dailey).  Borgnine doesn’t sing in the film but musical vets Dailey and MacRae are in fine form performing such standards as “Button Up Your Overcoat” and “You’re the Cream in My Coffee,” Musical-bio-pic veteran Michael Curtiz was the director. Reviews were mixed. The New York Times found it “occasionally diverting and generally harmless” because of the music and “some amiable people,” adding “but as a rather polite career biography of three seasoned professionals it seems an extremely mild, even careless reflection of show business history and the era itself.”