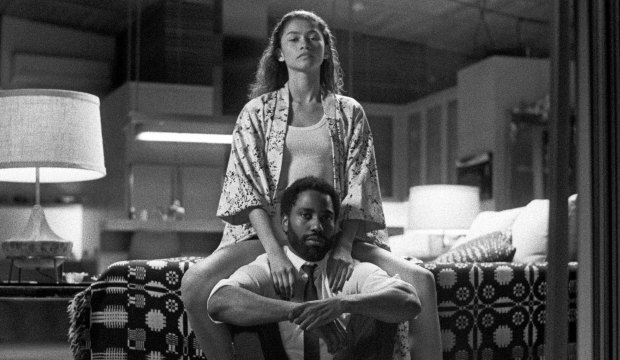 The extended awards season calendar has allowed Netflix to drop even more Oscars 2021 contenders into its already packed slate.

After debuting “The White Tiger” and “Pieces of a Woman” in January, the streaming service adds the highly anticipated (if already polarizing) “Malcolm & Marie” to the mix, along with the black comedy “I Care A Lot.” Those Netflix movies join an already impressive roster of features vying for Academy Awards attention in 2021, including “Mank,” “Ma Rainey’s Black Bottom,” “The Trial of the Chicago 7,” and “The Prom.”

Should one of those features win the Oscars’ top prize, it would be a historic moment. Netflix has yet to win an Oscar for Best Picture, but the studio has become a dominant force in the awards conversation over the last few years. In 2020, Netflix received more Oscar nominations (24) than any other studio, including 10 for Martin Scorsese’s “The Irishman”: Best Picture, Best Director (Scorsese), Best Supporting Actor (Al Pacino and Joe Pesci), Best Adapted Screenplay, Best Production Design, Best Cinematography, Best Costume Design, Best Editing, and Best Visual Effects. But despite that haul, the service won just two Oscars at the 2020 ceremony: Best Supporting Actress for Laura Dern and Best Documentary for “American Factory.” The Scorsese film was shut out completely.

“One of the interesting things you recognize when you’ve got a global audience is, you’re trying to assimilate and make the films that they love,” Netflix Original Films head Scott Stuber told Variety in January when it was revealed Netflix planned to debut new films every single week. “I see very diverse taste around the world.”

With the Oscars calendar adjusted to account for the coronavirus pandemic, eligibility for the 2021 ceremony has extended to February 28. Ahead, the top Netflix movies in the 2020-2021 awards conversation.

Seven years after her awards breakthrough with “Gone Girl,” actress Rosamund Pike stars in this dark comedy about a con artist from director J Blakeson.

Zendaya and John David Washington star in this Sam Levinson relationship drama that shot during the coronavirus pandemic and has already generated massive awards buzz for its two leads — despite a somewhat divided response from critics thus far.

Directed by Ramin Bahrani and produced by Priyanka Chopra Jonas, “The White Tiger” could be a late-breaking Oscars contender.

Like “Ma Rainey’s Black Bottom,” the expectation among Gold Derby Experts is that two “Pieces of a Woman” performances will be recognized by Oscars voters: Vanessa Kirby in the Best Actress category and Ellen Burstyn for Best Supporting Actress.

The science-fiction film has generated some outside buzz for George Clooney, who stars in the project and also directs.

Based on the August Wilson play of the same name, “Ma Rainey’s Black Bottom” is a major contender for 2021 Oscars, including Best Actor for the late Chadwick Boseman and Best Actress for Viola Davis.

Directed by Ryan Murphy and based on the Tony Award-nominated musical of the same name, the star-studded “The Prom” should find its way to numerous Golden Globe nominations, including Best Actress in a Musical or Comedy for Meryl Streep.

Directed by David Fincher and based on a script by Fincher’s late father, Jack, “Mank” is a true Hollywood story about Herman J. Mankiewicz (Gary Oldman), the co-writer of “Citizen Kane.” A heavy favorite before it even screened for pundits, “Mank” is expected to compete across the board, from Best Picture and Best Director to Best Actor (Oldman) and Best Supporting Actress (Amanda Seyfried) to Best Original Score (Trent Reznor and Atticus Ross).

Ron Howard’s family drama was drubbed by critics upon its release, but star Glenn Close is still a major factor in the Best Supporting Actress race.

Sophia Loren returns to the screen for the first time since 2009’s “Nine” in “The Life Ahead,” a film directed by her son. If she’s nominated for Best Actress, Loren would make Oscars history for the longest gap between nominations. She was last in contention for Best Actress in 1965.

Directed by acclaimed animator Glen Keane, an Oscar winner at the 2018 Academy Awards for Kobe Bryant’s “Dear Basketball,” “Over the Moon” could find itself in the thick of the Best Animated Feature race.

Written and directed by first-time feature filmmaker Radha Blank, who also stars, “The 40-Year-Old Version” has received a number of critics’ groups awards thus far as well as a Gotham Award for Best Screenplay.

Directed by “Cameraperson” filmmaker Kristen Johnson, “Dick Johnson Is Dead” is a love letter to Johnson’s father, and uses both non-fiction and fiction conceits to tell its heartwarming story. A nomination in the Best Documentary category is well within reach.

The timely film about the corrosive damage caused by social media is a possible nominee for Best Documentary.

Written and directed by Charlie Kaufman, the strange and unsettling drama was a critical favorite and could put Kaufman — an Oscar winner for his “Eternal Sunshine of the Spotless Mind” script and a four-time nominee — back in the race for his adapted screenplay.

The lighthearted comedy with Will Ferrell and Rachel McAdams features a number of Best Original Song contenders, from the silly “Jaja Ding Dong” to the soaring “My Home Town.”

The powerful and heartwrenching film about sexual abuse inside the world of women’s competitive gymnastics is a contender for a Best Documentary nomination.

Touted by filmmaker Kris Pearn as a cross between “Arrested Development” and “Grey Gardens,” this Netflix animated movie is among the contenders in the Best Animated Feature category at the 2021 Oscars.

Produced by Higher Ground Productions, the company former President Barack Obama and former First Lady Michelle Obama launched in 2018, “Crip Camp” could follow in the footsteps of the Higher Ground Netflix doc “American Factory,” which won Best Documentary at the Academy Awards in 2020.

Directed by Lana Wilson, the Taylor Swift documentary is a potential awards contender in both the Best Documentary category as well as Best Original Song, where Swift’s track “Only the Young” could compete.