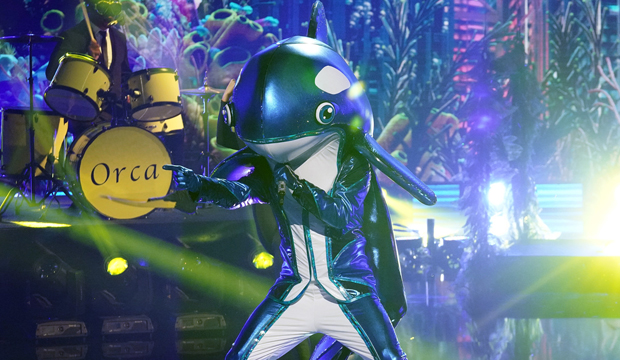 As the first wild card contestant in “The Masked Singer” history, Orca had a lot riding on his first performance … and he delivered. This blue-and-white killer whale had the panelists dancing on top of the table during his initial appearance on Fox’s reality TV show. His rock star persona and effortless vocals definitely made a him a front-runner to surf all the way to the finish line. “First wild card and you delivered,” shouted Jenny McCarthy following Orca’s rendition of “We’re Not Gonna Take It” on Wednesday, March 24. “You killed it, man!”

Below, see all of Orca’s “The Masked Singer” performances ranked worst to best. Bookmark this page as we’ll be updating it throughout the season.

Here is how Orca describes himself in his own words: “Welcome to Orca’s Piehole! Let me tell you the funny tale of how pizza shaped my life. You see, I was 24 and closer to becoming a punchline than achieving my goal of becoming a big star. My dad told me if I didn’t make waves by 25, it was time to move on. The clock was ticking. I had to hustle. So I improvised. I hid my audition tapes inside boxes of pizza and delivered them all around the town. It was my last shot. And at the 11th hour — boom! That’s how I accomplished my wildest dreams. And now as the wildest card yet I’m gonna blow up this competition. Now call and order our killer special: extra large and extra anchovies.”

Guest host Niecy Nash joked that she thought Nicole Scherzinger‘s pigtails were going to pop off because of how much the judge was rocking out to Orca’s first performance. Nicole laughed, “I did too! They were like, ‘I’m not gonna take it anymore.'” Robin Thicke agreed, saying the whale’s voice was one “you can’t fake … you can’t know how to get to the grit on the right notes.” He then added it was one of his “favorite performances of any season at any time.” Can Orca end up out-swimming the competition to claim the Golden Mask for Season 5?