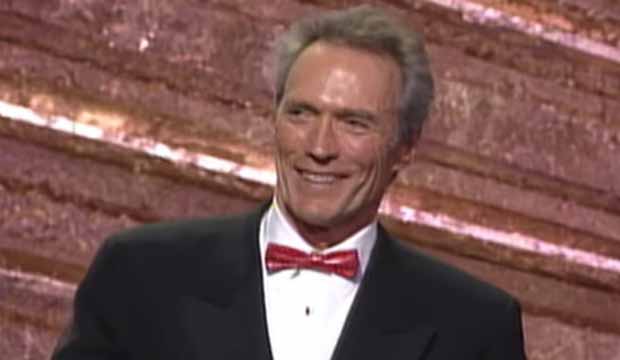 Some well-established actors and a composer achieved unusual Oscar feats, while a young and upcoming actress had a surprising win. Enjoy our flashback 30 years to the Academy Awards ceremony of 1993.

Hosting for the fourth consecutive year, Billy Crystal began the 65th Academy Awards ceremony by entering astride a gigantic Oscar statue pulled by . . . the Best Supporting Actor winner from the year before, Jack Palance, who had memorably shown off his impressive push-up abilities during his acceptance speech.

Five diverse but memorable films made it into the top category of the night, and none swept; in fact, at the end of the event, 11 movies had won one award each. One of the biggest box office draws of 1992 earned a Best Picture nomination; however, “A Few Good Men” failed to claim any of its four bids. The film with one of the most infamous surprise twists in cinema history garnered six bids; the sole win for “The Crying Game” was (unsurprisingly) Best Original Screenplay. “Scent of a Woman” would also end the night with one win (out of four nominations). Two of the Best Picture nominees came into the night with nine nominations each – the period drama “Howards End,” which would end with three victories (including Best Adapted Screenplay), and Clint Eastwood‘s revisionist western “Unforgiven,” which came out with the most wins at four, as well as the top prize. Jack Nicholson presented the statue to his fellow “New Hollywood” actor Eastwood, who claimed the stage for the second time that evening.

During this awards season, Eastwood joined a shortlist of distinguished men who had earned nominations for Best Director and Best Actor for the same film — Orson Welles, Laurence Olivier, Woody Allen, Warren Beatty, Kenneth Branagh and Kevin Costner, and was the fourth to win Best Director. In a nearly four-decade career, these were Eastwood’s first Academy Award nominations; although he lost the acting bid, two out of three isn’t bad – and he would repeat this feat 12 years later with “Million Dollar Baby.” Four of the five Best Picture nominees earned directing bids: Neil Jordan (“The Crying Game”), James Ivory (“Howards End”) and Martin Brest (“Scent of a Woman”). Robert Altman earned a spot for “The Player,” while Rob Reiner was shut out for “A Few Good Men.”

Eastwood lost out on Best Actor, but one of his contemporaries finally received his due. Over the previous 20 years, Al Pacino had received six acting nominations, and at this ceremony he earned not one, but two. He joined a short list of actors, becoming the sixth performer to earn double acting nominations in a single year. He lost in supporting, but but finally claimed victory for Best Actor for his portrayal a bad-tempered blind man in “Scent of a Woman.” His competition was formidable; besides Eastwood, he was up against Robert Downey Jr. and Denzel Washington for their leads in the biopics “Chaplin” and “Malcolm X,” and Stephen Rea for the critically acclaimed “The Crying Game.”

Three of the five Best Actress nominees had each earned acting bids in the past, but never won — Mary McDonnell (“Passion Fish”), Michelle Pfeiffer (“Love Field”) and Susan Sarandon (“Lorenzo’s Oil”) — while the other two were first-time nominees. Well-renowned French actress Catherine Deneuve received her sole nomination for “Indochine,” which did win for Best Foreign Language Film. This was the first nomination and first win for Emma Thompson, who earned a statue for “Howards End;” she, too would go on to join a short list of performers. Her Best Adapted Screenplay win for “Sense and Sensibility” in 1996 would make her the second, and one of a few actors (with Barbra Streisand, Michael Douglas, George Clooney, Brad Pitt and Frances McDormand) to have earned an acting and non-acting Oscar.

Another performer who joined an elite group was Gene Hackman. He became the fourth man (out of six currently) to obtain wins for Best Actor (for “French Connection,” 1972) and Best Supporting Actor, for “Unforgiven,” and was up against one of the men who had previously achieved this feat, Jack Nicholson (“A Few Good Men”). Also competing were Pacino (“Glengarry Glen Ross”) and popular character actor David Paymer (“Mr. Saturday Night”). Rounding out the category was the legendary performance by Jaye Davidson in “The Crying Game,” the first of only two films the model has made.

The biggest surprise of the night was the Best Supporting Actress winner, with Marisa Tomei claiming victory for her portrayal of the fast-talking Mona Lisa Vito in “My Cousin Vinny” — her first major film role. Presenter Jack Palance joked, “This is one of the few times in the history of Academy Awards that five foreign actresses were up for the same award — four English and one from Brooklyn.” Indeed, Tomei was up against four esteemed foreign actresses — although one, Judy Davis (“Husbands and Wives”) is actually Australian. The other nominees were Joan Plowright (“Enchanted April”), Vanessa Redgrave (“Howards End”) and Miranda Richardson (“Damage”).

Another Oscar rarity was achieved by composer Alan Menken. With his wins for Best Original Song (“A Whole New World,” shared with Tim Rice) and Best Original Score, both from “Aladdin,” he became the third person to win two Oscars in back-to-back ceremonies (he had won the previous year in the same categories for “Beauty and the Beast”).

Two legendary actresses and one legendary director were honored. Elizabeth Taylor and Audrey Hepburn (who had sadly passed away two months prior) were each bestowed the Jean Hersholt Humanitarian Award, while Federico Fellini was given an Honorary Oscar.