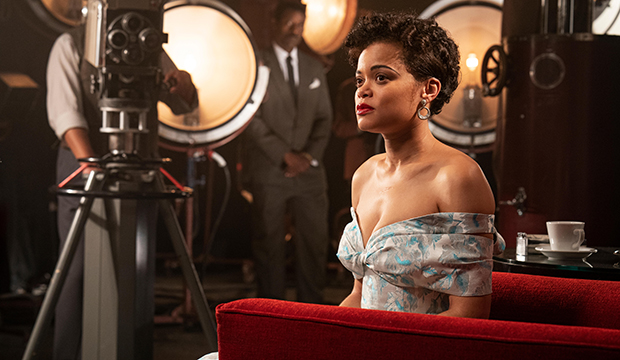 Last year we watched as Renee Zellweger followed the yellow brick road all the way to the Wizard of Oscar as Judy Garland in “Judy.” Can lightning (or a tornado) strike two years in a row? That’s surely the hope of Andra Day, looking like a strong Best Actress Oscar contender for her title role in “The United States vs. Billie Holiday.” Like Garland, Holiday rose to stardom in the late 1930s. She also had multiple marriages, faced financial woes and struggled with drugs and alcohol. The question is: can the role in this Hulu release deliver the Oscar to Day?

Before making a decision, keep in mind that the academy has a long history of recognizing actresses for portraying other actresses or entertainers. And the more drama, trauma and tragedy the better. Even raging and hysterical divas are welcome.  Let’s look back at some prime and primadonna examples from Oscar’s history.

Grace Moore played an opera singer in 1934’s “One Night of Love.” She would fail to grace Oscar’s stage, as the prize went to Claudette Colbert in “It Happened One Night.”

1950 presented the ultimate showdown between two major divas both in ironic diva roles. Bette Davis was all about winning her third Best Actress trophy (it would’ve set a record back then) for having the guts to portray, so sassily, an aging actress in Best Picture champ “All About Eve.” Most pundits assumed her chief competition was one-time screen queen Gloria Swanson, who was suddenly having a big career comeback thanks to portraying, so flamboyantly, a pathetic has-been silent-film star in “Sunset Boulevard.” The Oscars took a diva detour, providing Judy Holliday the ultimate holiday for “Born Yesterday.”

Davis would return to the race again in two years, this time portraying an Oscar-winning star in “The Star.” Joining her was Susan Hayward as a rising singing star in “With a Song in My Heart.” Voters opted for a different tune, as Shirley Booth in “Come Back, Little Sheba” would come to collect the little gold man.

In 1954, Judy Garland made her big Hollywood comeback in the remake of “A Star Is Born.” Widely seen as the frontrunner, Garland lost to a future princess Grace Kelly (“The Country Girl”).

1955 brought Eleanor Parker her third Best Actress nomination, for her depiction of a real-life opera singer in “Interrupted Melody.” But the music faded as Anna Magnani blossomed to Oscar glory in “The Rose Tattoo.” Also left out: Susan Hayward as a Broadway star in “I’ll Cry Tomorrow.”

1962 would bring back Bette Davis for her tenth and final chance at another Oscar, for her grotesquely terrifying portrayal of a former child actress in “Whatever Happened to Baby Jane?” Davis got the nomination over her co-star Joan Crawford, creating a rivalry almost more intense than the one onscreen. As if the presence of Davis wasn’t enough, Geraldine Page was also in the category for her role as a faded movie star in “Sweet Bird of Youth.” The Oscar went to Anne Bancroft for her portraying Helen Keller‘s heroic mentor in “The Miracle Worker.”

In 1968, sudden superstar Barbra Streisand won for portraying a young, heart-broken version of vaudeville/radio legend  Fanny Brice in Streisand’s film debut, “Funny Girl.” But she had to share with Katharine Hepburn (“The Lion in Winter”) when a rare tie occurred in the voting.

1972 provided the first time for Billie Holiday to be acknowledged by the academy when Diana Ross scored a nomination for portraying the jazz icon in “Lady Sings the Blues.” Ross would be left singing the blues, as Liza Minnelli’s role of cabaret crooner Sally Bowles in “Cabaret” prevailed.

Bette Midler rose to film stardom thanks to her presentation of a self-destructive rock star in 1979’s “The Rose.” Midler had all the right material, yet failed to work the magic. It was Sally Field who would bloom to victory as Norm Rae in “Norma Rae.”

1982 provided the ultimate showcase for dueling divas. Julie Andrews hoped to victor for her roles as nightclub singers in “Victor/Victoria.” Meanwhile Jessica Lange showcased the darker side of show business as troubled actress Frances Farmer in “Frances.” The Academy’s choice would eventually be Meryl Streep in “Sophie’s Choice.” Lange would at least get a consolation Best Supporting Actress prize for acting out as another actress opposite Dustin Hoffman in “Tootsie.” And Andrews would still have for statute for 1964’s “Mary Poppins.” Lange would go on to compete for Best Actress for playing the famed yet ill-fated vocalist Patsy Cline in 1985’s “Sweet Dreams.” It was Geraldine Page whose sweet dream would finally come true, triumphing on her eighth trip to the Oscars for “The Trip to Bountiful.”

Michelle Pfeiffer received one of three Oscar nominations for her sultry nightclub singer Susie Diamond in 1989’s “The Fabulous Baker Boys.” As fabulous as Pfeiffer was, the jewel predictably went to Jessica Tandy in the year’s Best Picture, “Driving Miss Daisy.”

Meryl Streep would be back in the running the next year, for playing a Hollywood actress recovering from drug addiction in “Postcards from the Edge.” Kathy Bates in “Misery” ultimately edged out the competition.

Bette Midler would see her second shot at Oscar for playing a 1940’s entertainer in 1991’s “For the Boys.” She was silenced by Jodie Foster in “The Silence of the Lambs.”

In 1993, Angela Bassett became a star for tackling Tina Turner in the biopic “What’s Love Got to Do With It.” It was Holly Hunter in “The Piano” who hit all the right notes with the academy.

In 2001, Nicole Kidman received her first Oscar nomination for playing a doomed Paris singer in “Moulin Rouge!” Halle Berry would prove to be the bell of the ball for “Monster’s Ball.” Kidman would get her payback the following year, accepting Best Actress for her short performance in “The Hours.” Her biggest threat? Renee Zellweger as the scheming Roxie Hart in the premiere show business show, “Chicago.” Zellweger’s screen rival Catherine Zeta-Jones as Velma Kelly would prevail in the Supporting Actress sweepstakes.

25 years after Spacek triumphed for “Coal Miner’s Daughter,” another country music icon would be celebrated when Reese Witherspoon walked the line to Oscar glory as June Carter Cash in “Walk the Line.”

The following year, another noted showgirl would claim the Oscar spotlight. “American Idol” loser Jennifer Hudson’s dreams would come true when she nabbed the Oscar for playing one-third of the trio in the musical “Dreamgirls.”

In 2007, the relatively unknown Marion Cotillard dazzled critics and audiences alike with her electrifying portrayal of legendary French singer Edith Piaf in “La Vie en Rose.” Given her lack of name recognition and the foreign language performance hurdle, Cotillard was considered a dark horse against Julie Christie in “Away from Her.” In a major upset, the Oscar went away from Christie and right to Cotillard, paving the way for a life in gold.

Natalie Portman took on the challenge of playing a New York City ballerina in 2010’s “Black Swan.” It was a performance filled with theatrics, allowing Portman to dance away with the Oscar for Best Actress.

One year later, Michelle Williams reaped her third Oscar bud for portraying Marilyn Monroe in “My Week with Marilyn.” In a fiercely tough race, Meryl Streep became Oscar’s lady for “The Iron Lady.”

Streep would be back in the running in 2016 for playing a very different type of lady: an amateur singer in “Florence Foster Jenkins.” The Oscar would go to Emma Stone as a struggling actress (and probably diva in the making) in the year’s Best Picture (but for only a moment,) “La La Land.”

Another type of show biz vixen would show up at the Oscars the next year. Margot Robbie received her first nomination for tackling notorious figure skater Tonya Harding. Robbie was lucky to crack the category, but had to watch as Frances McDormand clinched the gold medal for “Three Billboards Outside Ebbing, Missouri.”

In 2018, Lady Gaga hoped to do what Judy Garland couldn’t: win Best Actress for “A Star Is Born.” Her early momentum quickly faded, and she was widely expected to lose to Glenn Close in “The Wife.” In a classic close race, a star was indeed born when Olivia Colman in “The Favorite” was proclaimed the Academy’s favorite.

Getting back to future, there seems to be good precedent for Day as Billie Holliday to make the Oscar list, and possibly go all the way. The academy clearly dotes on divas, meaning Day could have her day at Hollywood’s ultimate holiday party. 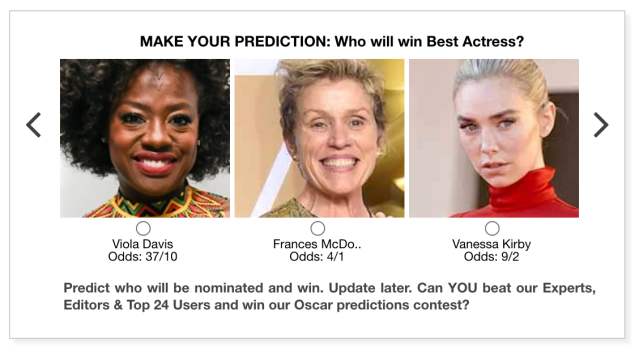