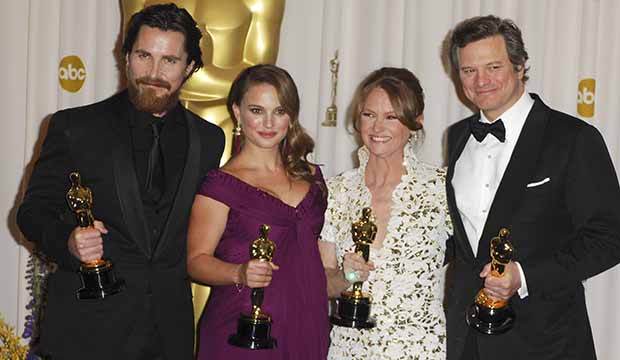 It was the year of “The King’s Speech” versus “The Social Network,” a couple of memorable (not in a good way) hosts and some exceptional acceptance speeches. The 83rd Annual Academy Awards ceremony was held on February 27, 2011, and there were some noticeable changes as the Academy tried to attract a younger audience, including a revamped website, the opportunity for people to post questions on Twitter or Facebook for any celebrity on the red carpet and a new design for the winners’ envelopes.

In their effort to appeal to a younger demographic, the Academy chose James Franco and Anne Hathaway to host the broadcast. They were the first male-female duo to co-host the event in 54 years, when another odd pairing – Jerry Lewis and Celeste Helm – reigned over the 29th ceremony. Hathaway, who was 28 at the time, is also the youngest person to ever host the Oscars, and Franco is one of the few hosts in Oscar history to also be up for an award the same night (for Best Actor in “127 Hours”). Unfortunately, the two never meshed, with Hathaway’s perky zingers landing flat against Franco’s almost detached demeanor. Perhaps it was nerves, but the two did not have chemistry, and are mostly remembered for being among the worst hosts in the history of the ceremony. Their shortcomings were perhaps highlighted by the surprise appearance of an iconic host celebrating a legendary host. Nine-time host Billy Crystal, with his deadpan humor, introduced a clip of 19-time host Bob Hope, and in mere five minutes proved why these two are among the best ever. Despite any issues, it was actually a great year of film and performances, with ten movies nominated for Best Picture in the second year since the Academy did away with the five-picture rule.

It was a nail biter to the end, with the two Best Screenplay winners neck-to-neck to win the big prize. In the end, Steven Spielberg presented the top award to “The King’s Speech,” which had come into the night with 12 nominations, but only left with four wins; however, they were big wins. Colin Firth unsurprisingly took home the Best Actor statue for his portrayal of King George VI and his efforts to learn to manage his stutter. 74-year-old David Seidler won for Best Original Screenplay on his (thus far) only nomination, and poked fun at his age, dryly declaring, “My father always said I’d be a late bloomer. I believe I am the oldest person to win this particular award. I hope that record is broken quickly and often.” (In 2018, 89-year-old James Ivory would win Best Adapted Screenplay for “Call Me By Your Name,” becoming the oldest person to win an Oscar). Director Tom Hooper also won his category on his only nomination to date, beating out two other first-time nominees, Darren Aronofsky (“Black Swan”) and David O. Russell (“The Fighter”), as well as Oscar veterans and former winners Joel and Ethan Coen (“True Grit”) and David Fincher (“The Social Network”), who had earned his second of two career nominations.

“The Social Network” was “The King’s Speech” biggest competition for the night, and ended up with three wins out of eight nominations. Besides Best Film Editing and Best Original Score, Aaron Sorkin won for his Adapted Screenplay. Sorkin has since earned two more nominations, and is hoping for yet another this year for “The Trial of the Chicago 7.”

For the first time in 25 years, both wins in the supporting acting categories came from the same film. Best Picture nominee “The Fighter” earned seven nominations, and its only two wins were for Best Supporting Actor Christian Bale and Best Supporting Actress Melissa Leo. Leo’s win was perhaps the most memorable of the evening, with the award being presented by 94-year-old legendary actor Kirk Douglas, who clearly enjoyed his time in the spotlight by flirting with host Hathaway and taking his time announcing the winner. A truly overwhelmed and clearly nervous Leo bantered with him before launching into her speech, memorably exclaiming, “When I watched Kate (Winslet) two years ago, she made it look so f**** easy!” Thus far, surprisingly she is the only one to have dropped the f-bomb during the typically stuffy evening.

The Best Picture contender with the second-most nominations was “True Grit,” which has the unfortunate distinction of being one of the few films in Academy history with double-digit nominations to lose in all categories. The film, which garnered critical acclaim, received ten nominations, including Best Director and Best Adapted Screenplay, prompting the Coen brothers to quip, “Ten seems like an awful lot. We don’t want to take anyone else’s.” 14-year-old Hailee Steinfeld became one of the youngest nominees ever with her bid in the Best Supporting Actress category, and Jeff Bridges received his sixth career nomination. This was his second consecutive nomination for Best Actor, and he had won the previous year for “Crazy Heart.”

For the third time in Academy history, an animated film was nominated for Best Picture. “Toy Story 3” lost that race, but won two of five nominations. Unsurprisingly, it was named “Best Animated Feature,” and Randy Newman won his second statue out of 22 career nominations. Upon accepting for Best Original Song (“We Belong Together”), he elicited laughs with his self-deprecating humor: “I’m very grateful for this, and surprised. My percentages aren’t great. I’ve been nominated 20 times. This is the second time I won.” He then referred to the Academy lunch for nominees, jokingly commenting, “where they have a Randy Newman chicken by this time.”

The final acting win was for Best Actress Natalie Portman, who was the sole win out of five nominations for the “Black Swan.” Three Best Picture nominees walked away empty-handed: “127 Hours,” “The Kids Are All Right” and “Winter’s Bone.” However, the last is memorable for launching the career of Jennifer Lawrence, who received her first of four nominations for Best Actress over a five-year period (she would win in 2013). The final Best Picture nominee, “Inception,” won four out of eight bids, including Best Cinematography and Best Visual Effects.