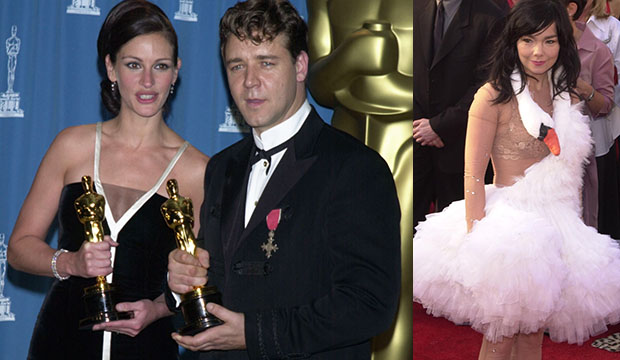 Two decades have passed since “Gladiator” enthralled audiences and somewhat surprisingly became the 73rd film to triumph as Best Picture. Although it was the big winner for the evening, it was a year in which the awards were split among a few films, including a foreign language film that made a lasting impression and two films directed by the same man, one of which made a winner out of one of America’s most popular actresses. The ceremony, which took place March 25, 2001, didn’t have a lot of surprises, but did have some interesting moments, and was Steve Martin‘s first time to host.

Two films came into the evening with the most nominations: “Gladiator” with 12 and Taiwan’s “Crouching Tiger, Hidden Dragon” with 10. At the end of the night, “Gladiator” went home with five awards, the most of any film that year, including a Best Actor win for its star Russell Crowe. His co-star (and future champ) Joaquin Phoenix received a Best Supporting Actor bid, making him half of the only pair of brothers to receive acting nominations (brother River received a supporting nod for “Running on Empty” in 1989). The only other wins for “Gladiator” were for Best Costume Design, Best Sound and Best Visual Effects. “Gladiator” was the first Best Picture champ since “All the King’s Men” in 1949 to take home the big prize without winning for directing or screenwriting.

Although “Crouching Tiger” lost the big prize, it is still one of the most acclaimed foreign-language films in the history of the Academy. Its 10 nominations were more than any other foreign language film up to that time, holding the record until “Roma” tied it in 2019, and is one of only 11 foreign language films to earn a Best Picture nom. With four wins, it won almost as many awards as the Best Picture winner, and tied with Sweden’s “Fanny and Alexander” (1983) as most-awarded foreign language film (“Parasite” joined this group with four wins in 2020). Besides the Best Foreign Language Film award, this visually-stunning production also won for its cinematography, score and art direction.

Although “Gladiator” and “Crouching Tiger” were the two films that got the most nominations, they both lost out in one of the top categories, with both Ridley Scott and Ang Lee losing out on Best Director. Steven Soderbergh was the third director in the history of the Academy to receive two bids in the Best Director category in the same year, the others being Clarence Brown in 1930 and Michael Curtiz in 1939. Neither of these men won in those years (Brown never won despite four more nominations, but Curtiz won in 1944 for “Casablanca”), but Soderbergh claimed victory for “Traffic,” while losing for “Erin Brockovich.” But that film ended up with its own memorable moment.

Julia Roberts won Best Actress for “Erin Brockovich” on her third nomination, having earned noms for Best Supporting Actress for “Steel Magnolias” in 1989 and Best Actress for “Pretty Woman” in 1990. Those two films had endeared the actress to American audiences, who rooted for her win for this inspirational film about small town people fighting big corporate corruption. Radiant with her win, she gave a memorable speech that included telling the music conductor, “And sir, you’re doing a great job, but you’re so quick with that stick. So why don’t you sit, ’cause I may never be here again.” She thanked pretty much everyone she ever knew while forgetting to mention the real Erin Brockovich, for which she later apologized.

One of the most memorable moments of the evening took place on the red carpet before the ceremony even began. I only need mention the name Bjork, and I’m sure images of a swan dress immediately come to mind. The Icelandic artist was nominated for and performed the original song “I’ve Seen It All” from “Dancer in the Dark,” and made her red carpet debut in a now-iconic dress consisting of a nude bodysuit covered by a giant swan whose neck was wrapped around hers with its head and beak resting on her breast. And, to top it all off, she mimicked laying an egg on the red carpet. It’s still talked about 20 years later, and has been parodied numerous times. She may not have won her category – that honor went to the legendary Bob Dylan for “Things Have Changed” from “Wonder Boys” – but she won the evening.

Other winners from that night for the supporting categories were Benicio del Toro for “Traffic” and Marcia Gay Harden for “Pollock.” “Traffic” also won Best Adapted Screenplay, and “Almost Famous” beat out “Gladiator” for Best Original Screenplay.